The Stags will welcome Exeter City to One Call Stadium on Saturday 26 September for their latest Sky Bet League Two clash (3pm).

Stags will be without defender Joe Riley, who is continuing his recovery from an ACL injury.

The Stags are heading into the weekend's match unbeaten in Sky Bet League Two, having drawn their opening two matches.

A goalless draw at home to Tranmere Rovers was followed by a 2-2 draw away at Leyton Orient on Saturday.

Saturday's visitors suffered a 2-0 defeat against Port Vale in their most recent outing, but drew 2-2 on the opening day against Salford City.

The referee for Saturday's game will be Christopher Pollard, assisted by Richard Wigglesworth and Oliver Bickle. The fourth official will be Steven Rushton.

If you are a current season ticket holder and have not received your code, please check your spam or junk folder before contacting our ticket office. The email should have the subject line: ‘iFollow Stags voucher code: Mansfield v Exeter City.’ The email will be sent from mark.stevenson@mansfieldtown.net.

Ahead of the match against Exeter, we were pleased to report a complete set of negative COVID-19 tests of our first team players and staff.

Tests were conducted following notification by Leyton Orient on Monday 21 September that ‘a number of its (Orient’s) first-team squad have tested positive for COVID-19’, after last Saturday’s match at The Breyer Group Stadium.

Mansfield Town were dealt their first league defeat in 2020/21 after Rollin Menayese’s opener was cancelled out in a 2-1 defeat against Exeter City at One Call Stadium.

Menayese rounded off a training ground routine from a corner to give his side a deserved lead against the Grecians.

However, one goal in either half from Rory McArdle and Josh Key turned the tide in the away side’s favour and saw them leave Nottinghamshire with all three points.

Graham Coughlan named an unchanged starting line-up for the third consecutive league fixture with only two alterations – Kellan Gordon and Alistair Smith – making their way onto the bench.

And it was the Irishman’s side who settled into the contest much quicker than their opponents.

Ollie Clarke captained the side once more and harried Exeter into squandering possession mid-way inside their own half. Picking up possession, he then fed Andy Cook who lashed a first-time effort into the side netting.

Ryan Bowman then tried his luck but found his namesake, Ryan Sweeney, in position to block his thump from range.

The Stags were evidently enjoying the better spells, though, and made their second corner kick of the afternoon count with a neat routine straight from the training ground.

From the far side, Corey O’Keeffe lofted his initial pass into Clarke whose looping diagonal then met Harry Charsley having peeled away from the rest of the players inside the area. It allowed the midfielder time and space to roll across a simple ball that was slotted home by Menayese.

A slick move by the home side seemed to trigger Matt Taylor’s men into life as they sought an immediate response.

Several attacks were smothered by expert defending but City found themselves level five minutes from the interval via a set-piece of their own.

Matt Jay delivered the corner kick towards McArdle who, with a combination of head and knee, bundled home.

Into the second period and there was a sense of déjà vu as Mansfield began to dominate the early exchanges. Menayese hoisted a ball towards the penalty area, which was subsequently flicked on by Cook and smashed into the midriff of the Grecians ‘keeper by Charsley.

The tempo had been upped on the hour mark by both sides and the visitors were able to carve out a fantastic chance.

Raw pace from Joel Randall saw him race clear of Menayese and produce a superb reaction stop from Marek Stech to thwart Randell Williams in the centre.

Pressure was mounting from the Grecians and it told on 77 minutes as yet another corner paid dividends.

Key proved to be the beneficiary when Stech was unable to deal with a whipped delivery, leaving Exeter’s No. 30 to nod home.

Mansfield attempted to salvage at least one point from the remaining time and almost did exactly that through Clarke. Substitute Nicky Maynard’s first touch evaded Archie Collins and the through ball was hammered towards goal by the Stags’ skipper; however, he was unable to find the target.

The amber and blue’s next test arrives in the shape of Newport County – when they travel to Rodney Parade on Saturday 03 October. 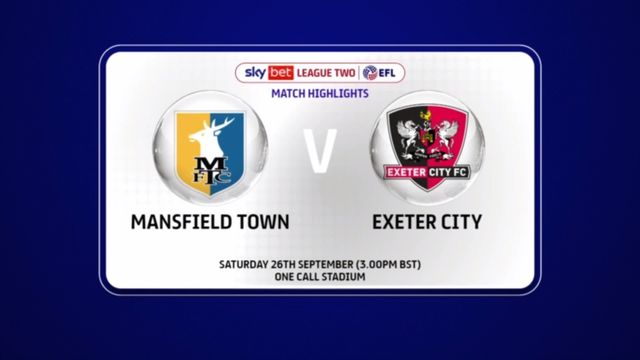 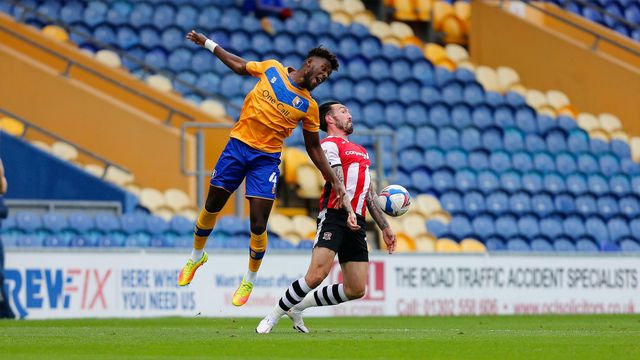