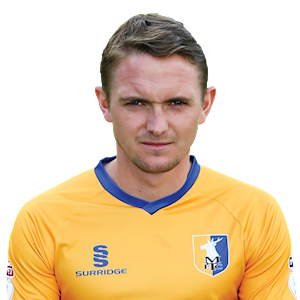 Stags completed the transfer of versatile left-back/left midfielder Johnny Hunt from Chester in May 2017.

The 26-year-old is highly competent at either left-back or left midfield and is widely regarded as an unfulfilled talent.

Liverpool-born Hunt progressed through the Wrexham academy and made his debut for the Dragons in 2010 against Oxford United.

He was part of the Wrexham side which won the FA Trophy in 2013. The match with Grimsby finished 1-1 after extra time and Hunt stepped up to coolly slot home the winning penalty in the shootout.

The classy left-footer made over 100 appearances for the North Wales side, scoring 13 goals, before securing a move to League Two side Cambridge United prior to the 2014/15 season for an undisclosed fee.

Stating a desire to move closer to home, Hunt left the Abbey Stadium at the end of the season and joined National League side Chester and netted on his competitive debut in a 1-0 win over Braintree.