Next up for the Stags is a Papa John’s Trophy fixture away at Harrogate Town on Tuesday 31 August (7:45pm). Here’s all you need to know ahead of the game…

Defender James Perch will likely miss the clash due to an injury picked up in training last week.

The Stags were narrowly beaten last time out, a 1-0 defeat away at Swindon Town.

Tuesday’s hosts have won three of their last four matches in Sky Bet League Two, but drew 1-1 against Exeter City on Saturday.

We last faced Harrogate on Tuesday 23 February in Sky Bet League Two, with the Sulphurites running out 1-0 winners.

The referee for Tuesday’s game will be Andy Haines, assisted by Daniel Woodward and Kenwyn Hughes. The fourth official will be Matthew Dicicco.

The Stags have received a total of 500 tickets for the game in both seated and standing areas.

Tuesday's match will be available to view live on iFollow Stags for £10. For more, click here.

The 25-year-old forward struck twice after the break to add to his 44th minute opening goal.

George Lapslie delivered a consolation goal for Stags in the 66th minute, after Jordan Bowery missed a penalty 15 minutes earlier.

Nigel Clough made nine changes to the side that faced Swindon Town at the County Ground on Saturday with only Farrend Rawson and Lapslie retaining their places.

George Shelvey and Ethan Hill made their first appearances in amber and blue.

Harry Charsley returned from injury to retake a spot on the right of Mansfield’s midfield diamond.

Harrogate pressured Stags from the opening as make-shift centre back Keaton Ward dealt with Lloyd Kerry’s imminent threat after 80 seconds.

Three minutes later Simon Power breezed inside from the right wing before Shelvey glanced the corner-headed shot over the crossbar with an outstretched glove.

Ryan Burke’s first time cross after ten minutes found Bowery at the far post. The striker held off his man well to nod the ball onto the base of the post and wide of danger.

Three minutes later Kerry threatened again. The midfielder beat two Mansfield men to arrive inside the box and blaze a shot well over the crossbar.

A misplaced Shelvey kick-out played Alex Pattison in for the hosts soon after. Ward was alert to the danger for Mansfield and the defender’s sliding block deflected the shot narrowly beyond the post.

Power received the game’s first yellow card in the 24th minute having wiped out Tyrese Sinclair advancing down the right wing at pace.

Three minutes after receiving his caution, the midfielder struck the post by curling a right-footed effort from the edge of the box.

George Thomson’s driven shot on the turn from well outside the box was confidently met by Shelvey. The young ‘keeper got down to his right well to palm away the hosts’ threat five minutes before the break.

Orsi opened the scoring in the 44th minute. A long-range effort was spilled by Shelvey allowing Orsi to latch onto the rebound and roll the ball over the line, taking the lead at half-time.

Four minutes after the restart Power began to cause trouble from the left again. The winger’s shot from range dropped narrowly wide of the post with Shelvey surely beaten.

Lapslie advanced through Harrogate’s midfield to link up with Bowery moments later who saw his shot deflected wide. The subsequent corner was struck onto the crossbar by Lapslie’s volley before Sinclair’s rebounded effort was handled inside the box to win a spot-kick.

Bowery’s effort from 12 yards was struck firmly against the crossbar on 53 minutes handing Harrogate possession. The hosts capitalised on Stags’ error to advance quickly down the left, finding Orsi inside the box who bundled the ball past Shelvey.

James Clarke almost halved the deficit for Mansfield after 58 minutes. The right-back met a loose header on the full-volley clipping the inside of the post skewing wide behind the ‘keeper’s back, narrowly evading the opposite post.

Ward’s pass back after the hour mark was miscontrolled by Shelvey, before Power blasted a shot wide with the ‘keeper out of his goal.

Lapslie’s volley in the 66th minute re-ignited the group tie for Mansfield. The midfielder’s effort was palmed vertically by Cracknell, over his own head and into the back of the net.

Three minutes later Harrogate had their third. Shelvey saved Aaron Martin’s initial header before Orsi bundled Harrogate back into a two-goal lead at the back post and claim his hattrick.

Jason Law found Sinclair well in the 72nd minute but the young forward’s first-time effort beat the post from a promising position.

Introducing experienced players at the end of the second period, Harrogate were able to see out Mansfield’s late threat to take maximum points. 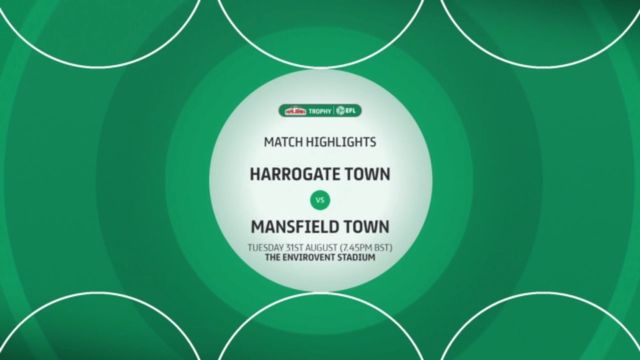 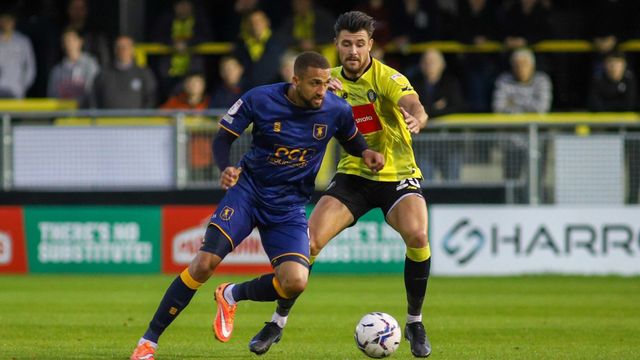