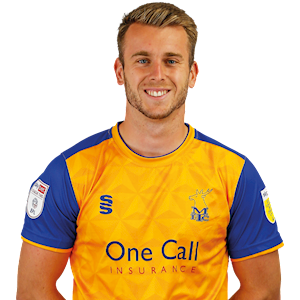 The Stags fought off competition to sign forward Rhys Oates in July 2021.

Oates, who can play up front or out wide, fired in 18 goals last season as the Pools won promotion to Sky Bet League Two.

Starting his career as a youngster at Barnsley, the 26-year-old signed his first professional contract as a second-year scholar with the club, after winning the Academy Scholar of the Year award.

The forward appeared ten times for the Tykes, whilst also spending time on loan with Gainsborough, Stockport, Grimsby and Chester during his spell at Oakwell.

Oates moved permanently away from Barnsley in 2015, signing for Hartlepool United. He made over 100 appearances for the Pools over three seasons, before signing for Morecambe in 2018.

The former Barnsley man found the net six times in Morecambe colours before a return to Hartlepool last year, where he would finish as top scorer in a memorable season for the Pools.

The versatile forward fired in 18 goals, including three strikes over the course of the National League play-offs, leading him to be named as the club’s Players’ Player and Fans’ Player of the Year.

Oates joined the Stags on a free transfer following the expiration of his contract at Hartlepool.