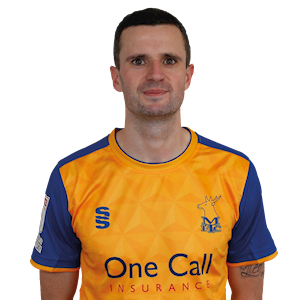 We signed former Scottish international, Jamie Murphy, on deadline day in the January 2022 transfer window. Jamie joined the Stags on loan until the end of the season from Hibernian.

The 32-year-old reignites his relationship with Stags’ boss Nigel Clough who he played under at both Sheffield United and Burton Albion.

The former Scottish international began his career at Motherwell, making his debut in 2006 and eventually recording 176 appearances.

Jamie, who can also play in midfield, scored 34 times for the Steelmen, becoming the club’s all-time top goalscorer in European football.

The Glaswegian left his homeland in 2013, swapping Edinburgh for south Yorkshire as he joined Sheffield United on a permanent deal.

After two seasons with the Blades, the Glasgow-born wideman joined Brighton & Hove Albion. In the 2016-17 season, Murphy made 37 league appearances – scoring six goals - as Brighton gained promotion to the Premier League.

After a year and a half in the English topflight, the midfielder signed for Glasgow Rangers where he spent three years. During that time he represented the club in the qualifying stages of the Champions League.

A loan spell at Burton Albion in 2020 saw him again link up with Stags’ chief Nigel Clough. Under the manager, Jamie scored seven times in just ten matches for the Brewers.