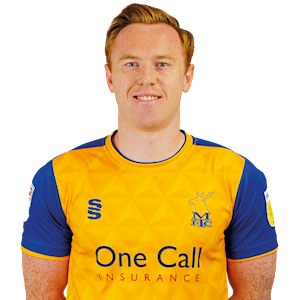 In June we announced the signing of prolific striker Danny Johnson from Leyton Orient on a two-year contract.

The frontman notched 20 goals in 2020/21 for the O’s, including a run of five goals in the first five matches of the season.

Johnson began his career as a youngster with Middlesbrough, before moving into the youth system at Hartlepool.

After spells with Harrogate Town and Billingham Synthonia, the now-28-year-old would enjoy his most prolific spell with Guisborough Town.

Not only this, but his stunning goalscoring exploits would land him a move to Championship side Cardiff City, where he scored regularly for the under-21 development squad.

A move to Gateshead followed, with Johnson netting 52 goals in three years with the Tynesiders.

Spells in Scotland with Motherwell and Dundee preceded his switch to East London, netting 20 goals in 48 appearances for Leyton Orient in 2020/21.