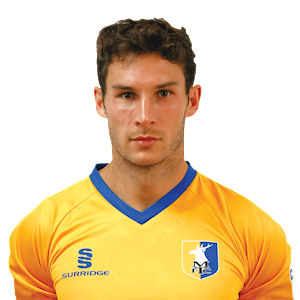 Versatile midfielder Will Atkinson joined Mansfield Town in May 2017 after turning down the offer of a new contract at former club Southend United.

The 29-year-old previously spent a month on loan at One Call Stadium in 2008, making 12 appearances in the amber and blue.

Driffield-born Atkinson graduated from the academy of local side Hull City in 2006 as an 18-year-old after signing a two-and-a-half year professional contract with the Tigers.

However, his senior debut came during a loan spell with then-League One side Port Vale against Brighton & Hove Albion.

During a six-year spell with Hull as a professional, Atkinson embarked on seven different loan spells – including two separate stints with Rochdale – before leaving the KCOM Stadium on a permanent basis to join Bradford City, with whom he'd spent the second half of the 2011-12 season.

He enjoyed an incredibly successful year with the Bantams as they surprised the football world by reaching the final of the League Cup.

Atkinson appeared in every round as Bradford defeated three Premier League sides en route to the final – Wigan on penalties, Arsenal on penalties and Aston Villa over two legs.

The Bantams were defeated 5-0 in the final by Premier League Swansea City, but nevertheless became the first side from the fourth tier of English football to reach the League Cup final since Rochdale in 1962.

Atkinson was part of the Bradford side which returned to Wembley Stadium just three months later when they triumphed 3-0 over Northampton Town in the play-off final to secure promotion to League One.

Despite winning promotion, Atkinson opted to join then-League Two side Southend United. He was ever-present as the Blues reached the end of season play-offs.

He was a regular in the Southend team in 2014-15 as they won the play-off final, beating Wycombe Wanderers 7-6 on penalties following a 1-1 draw.

The versatile midfielder made an instant impact in League One, playing 39 times in the Blues' first season in the division, before scoring four goals in 41 appearances as Phil Brown's men finished seventh in the 2016-17 season – a point and a place outside the play-offs.