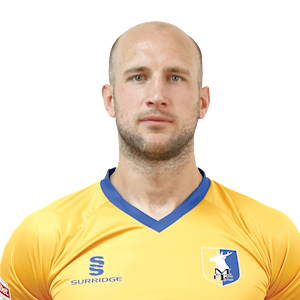 Out On Loan
at York City

Sheffield-born Mirfin graduated from the Huddersfield Town academy in the 2003/04 season and helped to keep 16 clean sheets in 25 matches as the Terriers won promotion from Division Three.

He left West Yorkshire at the beginning of the 2008-09 season and joined Scunthorpe United for a deal worth a minimum of £150,000.

His first season at Glanford Park culminated in promotion to the Championship via the play-offs, with Mirfin making 37 league appearances.

Mirfin played a major role in the Iron maintaining their Championship status following promotion, but then opted to leave Glanford Park at the end of the following season to join Watford on a two-year deal.

However, Mirfin returned to former club Scunthorpe United on loan until the end of the 2011-12 season, before signing permanently for the Iron.

The former Huddersfield man missed just one game in a season which saw Scunthorpe secure promotion to League One in 2014.

A brief loan spell with Hartlepool United followed in the 2014-15 campaign, before he returned to Scunthorpe and once again became an integral part of their side.

Mirfin made 36 League One appearances in the 2016-17 campaign as the Iron finished in the play-off positions, bowing out after a 3-2 aggregate defeat against eventual winners Millwall.