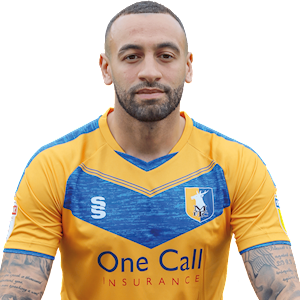 Davies started his career as a youth player for Manchester City, before becoming a first team regular at Oxford United between 2004 and 2006.

The striker had a brief spell in Italy with Hellas Verona, before switching back to England on loan with Wolverhampton Wanderers in 2007.

Davies then moved to Oldham, where he would return to in 2017 before joining the Stags.

He has been capped five times by Wales, making his international debut as a substitute in a goalless draw with Slovenia in 2005.

The 32-year-old has made over 400 League appearances in his career for the likes of Barnsley, Wolves, Brighton and Preston.

After an ankle injury that kept him out for almost a year, Davies returned to the Stags' squad in December 2019, coming off the bench in a 1-1 draw with Northampton Town at One Call Stadium.