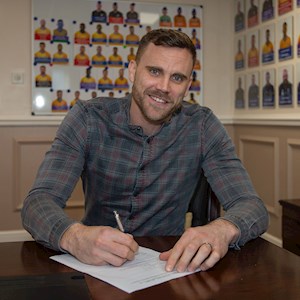 We announced the signing of experienced defender Ben Turner in February, on a deal that lasts until the end of the season.

The 31-year-old began his career at Coventry City after graduating from the club’s youth academy in 2005.

During his spell with the Sky Blues, which spanned from 2005 until 2011, he made 72 league appearances.

In 2011, Turner made the switch to then-Championship outfit Cardiff City, where he made 111 league appearances over a five-year stint.

A standout moment for the centre-back during his time with Cardiff was scoring a dramatic equaliser against Liverpool in the League Cup final at Wembley in 2012, a game that the Bluebirds went on to narrowly lose 3-2 on penalties.

Turner was an integral part of the Cardiff side that won promotion to the Premier League as League champions in 2012-13, appearing 31 times during their successful campaign.

The following season, Turner made 31 Premier League appearances with the Bluebirds.

The defender’s most recent spell was with Burton Albion, having made 27 appearances for the Brewers in the first half of the 2018-19 season.