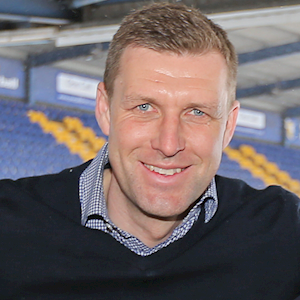 A tall central defender in his playing days, Futcher began his career with Oldham Athletic in 1999 before dropping into non-league with Stalybridge Celtic and Doncaster Rovers.

In 2002, Futcher joined Lincoln City where he went on to spend three years, making over 130 appearances, before switching to local rivals Boston United.

He then signed for fellow Lincolnshire side Grimsby Town where he helped them to reach the League Two play-off final which ultimately ended in defeat.

A short stint with Peterborough followed before he joined Bury. Futcher spent six years with Bury but also embarked on five different loan spells, including a short stay at One Call Stadium in 2011.

He became player/development coach at Bury in 2012 before taking up the post of joint-caretaker manager of the Shakers.

After manager David Flitcroft became Bury boss in 2014, Futcher was appointed as his assistant the following summer and helped the Shakers win promotion.

Futcher then joined Flitcroft at Swindon Town prior to the current season before leaving the County Ground to take up the post of assistant boss with the Stags.