Mansfield Town were held to a goalless draw as they shared the spoils against a dogged Carlisle United at One Call Stadium.

The visitors had the better of the chances in a contest which never really hit full stride.

Prior to the match, a crowd of 5,421 joined players and officials in remembering Her Late Majesty, Queen Elizabeth II, by a minute's applause and the playing of the National Anthem.

Both sets of players also wore black armbands in a mark of respect.

Inside the fourth minute, Stags were first to register a shot at goal when George Maris struck low at the goalkeeper after being teed up by George Lapslie inside the box following good play by Ollie Clarke on the right flank.

Carlisle missed a guilt-edged chance to go ahead in the 15th minute.

Stags allowed Jack Armer's ball to cross the breadth of the penalty area and breathed a sigh of relief when captain Morgan Feeney somehow directed his effort at Cristy Pym, with the goal at his mercy.

Then at the other end, Stags thought they had the lead.

'Keeper Tomas Holy could only parry George Maris' effort into the path of Lapslie to slot underneath him, but the flag was up for offside.

In the 24th minute, Stephen McLaughlin sent a right-footed rocket towards goal which smashed into the side netting.

Such was the power of the shot that the netting had to be quickly repaired by groundstaff during a stoppage in play.

Within a minute of the restart, Carlisle squandered a golden chance in front of their fans.

Kristian Dennis blasted the ball over from short range from the edge of the goal area after Gibson delivered from the right.

Then, in Stags' first charge of the second half, Lapslie sent a ball across the face goal but no one was able to meet it.

In the 49th minute, Akins turned well to smash goalwards, forcing Holy to turn the ball behind for a corner.

Jordan Bowery, moved from right wing-back to the left of a front three at the interval, hit a speculative effort into the Quarry Lane End as Stags searched for the breakthrough.

Gibson got in on the shooting act again as he controlled a delicious cross-field pass before lashing a shot wide of goal from the right side of the box.

Just shy of the hour, Maris was shown a yellow card for a late challenge on Gibson near the halfway line.

But then Gibson himself went into the book for dissent.

Stags were caught off guard in the 65th minute when Owen Moxon sent a deep ball into the home box, but a ghosting Morgan Feeney could only prod it at Pym as he escaped the Mansfield backline.

With 20 minutes remaining, Ollie Clarke was replaced by Stephen Quinn in Stags' first and only change of the match.

Maris then tried his luck from just inside the area, but it flew well over the bar.

From further out, Hartigan let one fly, and saw the same outcome.

With a little over 10 minutes remaining Pym was well behind an effort from Finley Back, who should have done better on the right of the Stags' box.

Maris had his head in his hands on 82 minutes as he side footed wide from 12 yards after Quinn delivered from the left.

It turned out to be the last noteworthy chance as both sides had to settle for a point.


Stags slipped to a first Papa Johns Trophy loss of the season as first half goals from Otis Khan and Danilo Orsi saw Grimsby win 2-0 at Blundell Park.


Mansfield Town produced the perfect away performance as Lucas Akins and George Lapslie both scored in the first half to earn a deserved 2-0 victory at Gillingham. 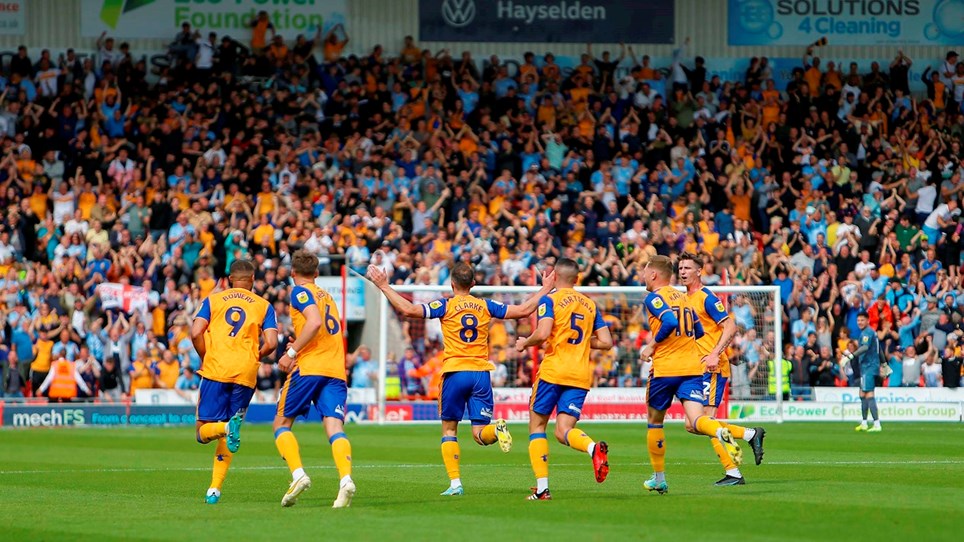 
Mansfield Town earned a first away win of the season in emphatic style as Nigel Clough’s men cruised to a much-deserved 3-1 victory at Doncaster Rovers.