Mansfield Town manager Nigel Clough reiterated his side’s steadfast determination to finish inside the top seven ahead of the final four, mouth-watering games of the season.

The Stags host Crawley Town at One Call Stadium on Saturday hoping to return to winning ways after two successive losses against Sutton and Carlisle.

Speaking to the local media ahead of the encounter with the Red Devils, the boss delivered a rallying cry of unity to the Mansfield faithful: “Stick with us,” said the gaffer.

“I know we’ve had some ups and downs at this club.

“I think this has been an unbelievable, rollercoaster season.

“To be in there challenging is unbelievable for everybody.

“Stick with us and we’ll do everything we can to get in that top seven.”

When speaking about the effort his squad had produced in the narrow 1-0 loss at Carlisle on Easter Monday, the gaffer revealed that duo Stephen McLaughlin and George Maris were playing with Covid-19.

“We had Stephen McLaughlin play yesterday with Covid, he hasn’t trained,” said Nigel.

“Him and George Maris have Covid at the moment.

“I don’t know if [they] get in trouble with protocols; there aren’t any [in place] anymore. You can do what you like now can’t you?

“They can’t do anymore, the players, at the moment than what they’re doing.”

The boss was displeased with some of the officials’ decisions at Brunton Park. Mansfield had a shot ruled to be not over the line by an assistant referee before an offside United attacker then advanced to bag the match-winner. 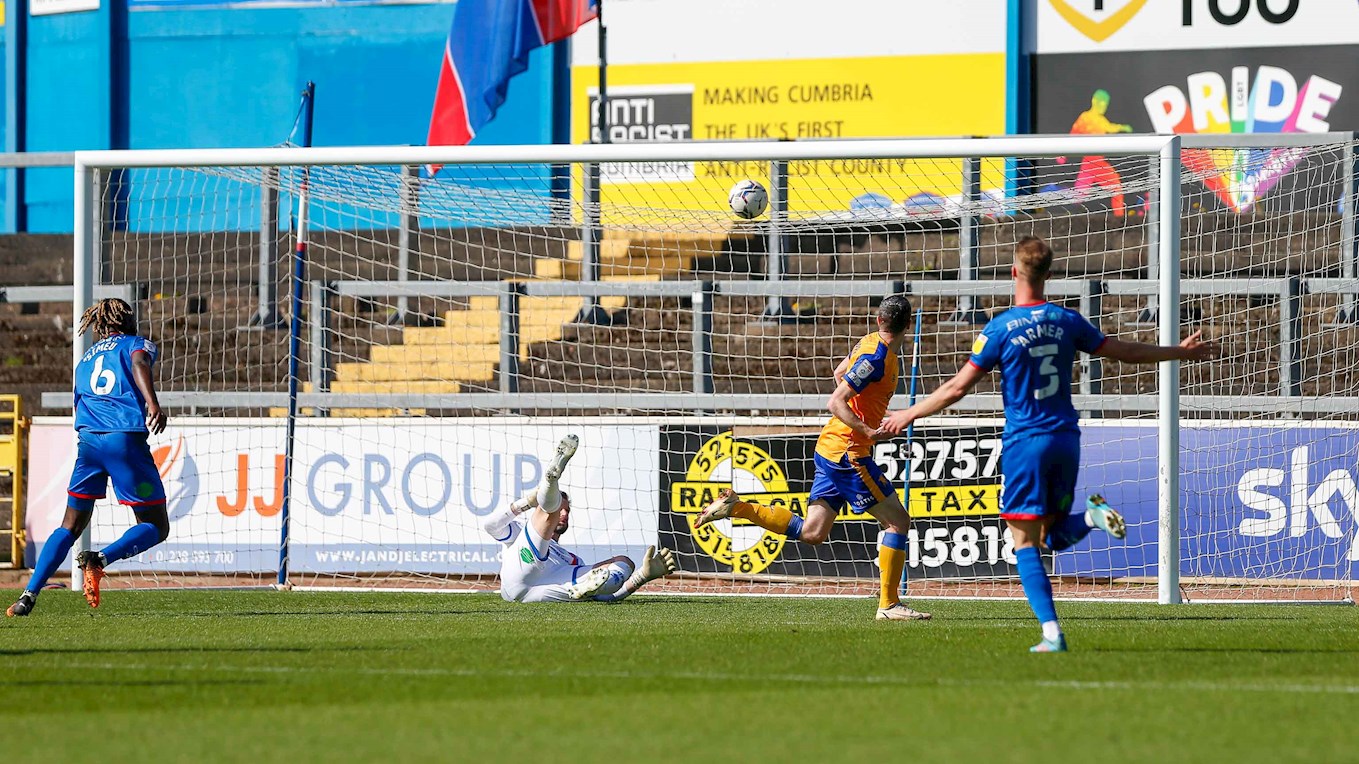 “[It’s] A mistake by the assistant [in the 41st minute] as we scored a perfectly good goal which is well over the line, and it isn’t given and then after that the same assistant fails to spot their lad [standing ahead of the last defender] for their goal when he is a yard offside.

“We controlled the game and created many chances. We were wasteful at times, but we were not wasteful on those two occasions as we scored a perfectly good goal and theirs was offside.

“Elliott Hewitt stands up and you can clearly see from the lines on the pitch [that the Carlisle attacker is offside].

“The assistant goes to put his flag up and then for some reason doesn’t.

“Our supporters have travelled seven or eight hours on coaches, and I feel they deserve better [decisions].

“We’ve had it now for 40 games and it started against Colchester on the third game of the season when we were in control in the 93rd minute and the referee inexplicably gives a penalty.

“It should have been three straight wins and intermittently over the next 40 games we’ve had some very poor decisions go against us.

“Every club will say they have had a few but I’ll ask any club to come up with as many as we have that have gone against us with two offside goals against Tranmere and the list goes on and on. I think us as a club, our supporters and players deserve better.

“We’ve had the decisions go against us in the last 40 games, but especially the one on Monday against Carlisle, the difference it makes is incredible.” 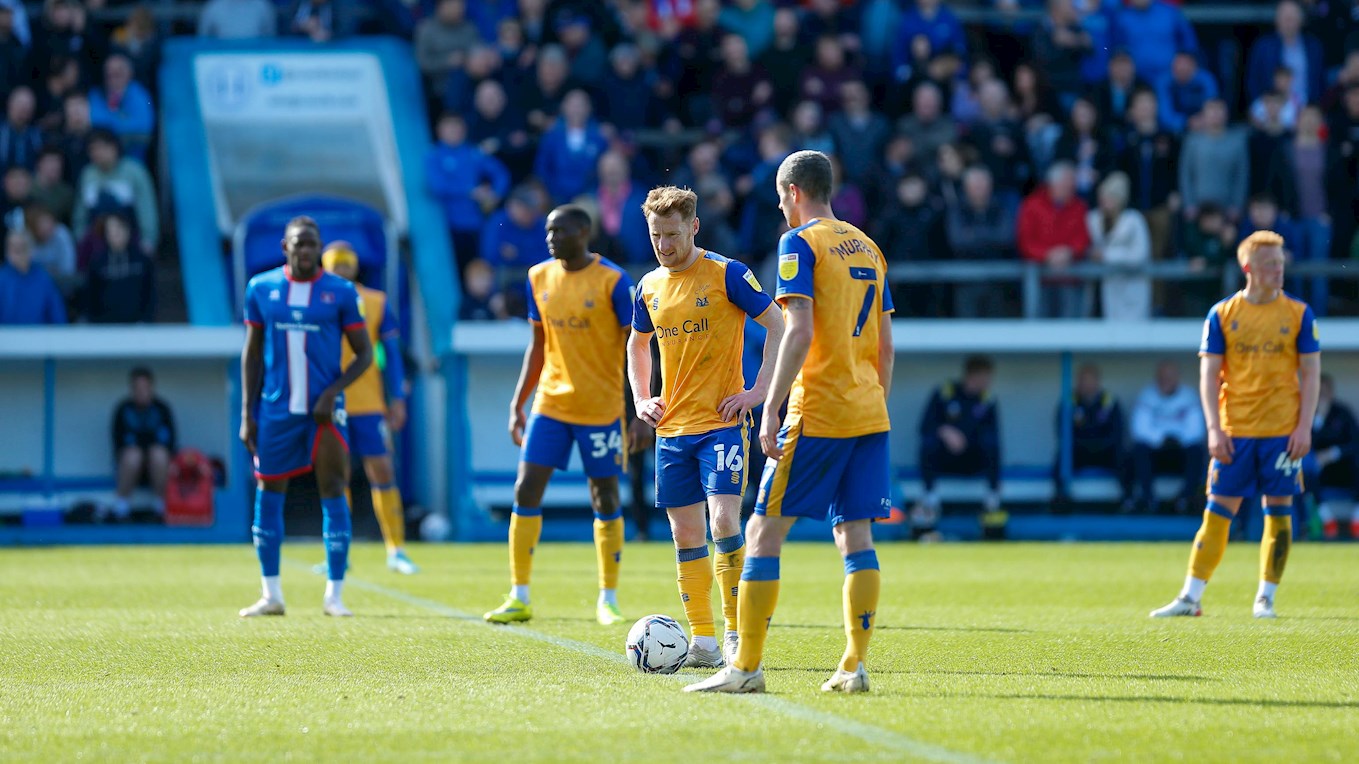 The Stags’ chief was pleased with the physical output of his squad in the encounter at Brunton Park yesterday.

“The lads were unbelievable,” he said.

“Dave Waldie, the strength and conditioning coach, could not believe it after the game.

“He [Dave] said to have that second game in three days and to be at that sort of level was incredible.

“I know that it is a big pitch and everything but his words on the coach were that he’s ‘never seen anything like that.’

“We were 15% above in our sprinting and we were 20% above on our high-speed running [compared to] the Northampton game, which was a very high physical game for us, so it was incredible.”

With three of the remaining four matches to play at home, the boss reiterated that everything is still to play for.

“[The aim is] To get in the top seven, that still remains the ambition,” he said.

“We should be three points off third place I believe we would be, after Carlisle.

“All we’ve got is four games left, we’ve got six hours of football to get those seven, eight, nine points whatever it might be.”

Speaking about this weekend’s opponents, Crawley, he said: “They’re one of the most underrated teams [in the division].

“They play in a certain way where they’ve got some good technical footballers for League Two.

“They play into feet, their movement is good, they rotate their players.

“With the run that they’re having, if the season had gone on for another few weeks; they would’ve been serious challengers for the play-offs.”

Top scorer Rhys Oates hasn’t featured in recent games and the manager provided an update on the striker’s fitness.

“[One the likelihood of Oates featuring against Crawley] 50-50 I would say. It’s getting to the stage where we’ll put him out there even at this stage.”

Paul Brown joins board at One Call Stadium


Mansfield Town are pleased to announce the appointment of local businessman Paul Brown to the club’s board of directors with immediate effect.


Supporters and businesses who sponsored a first team player during the 2021/22 season can collect the individual player’s shirt from the One Call Stadium ticket office from 10am on Monday 04 July.

Rotherham tickets to go on sale


Supporters can purchase tickets for our pre-season fixture at home to Rotherham United on Saturday 16 July from 10am on Monday 04 July.