Ryan Stirk’s excellent second-half finish earned Mansfield their first away league win of the season as the youngster’s first Stags goal for the club sealed a hard-fought 2-1 win over Stevenage.

John-Joe O’Toole’s thumping header had edged the visitors into an early lead as the veteran defender scored his second goal in two games.

That was before Stevenage centre-back Scott Cuthbert nodded the hosts level in similar fashion.

Mansfield’s on-loan midfielder, Stirk, wriggled past his defender to clinch the Stags’ second consecutive away victory with a clinical finish.

Manager Nigel Clough named an unchanged starting XI from the team’s Emirates FA Cup triumph at the Stadium of Light a week ago.

Following his midweek hat-trick against Newcastle under-21s, striker Danny Johnson picked up an ankle injury, ruling him out of action for the game.

John-Joe O’Toole started his third consecutive game for the Stags as the new recruit continued his return to regular first-team football.

Stevenage were almost gifted a perfect start by Stephen McLaughlin’s misplaced pass inside seven minutes which played in full-back Luther James-Wildin. Fortunately for the Stags, experienced defender O’Toole had picked up a key position in front of goal and was able to clear his grounded cross on the slide.

James-Wildin instigated a swift counter-attack seven minutes later. The defender’s pass was knocked on by Elliott List to Jamie Reid whose volley appeared to beat Nathan Bishop before dribbling onto the inside of the post to be collected by a relieved Bishop.

Startled by their let off, Stags attacked immediately after to win a corner. Stephen Quinn’s delivery found its way to Oli Hawkins lurking on the edge of the box, who blasted narrowly over on the half-volley.

The Stags were handed a second chance from a set-piece two minutes later, an opportunity they gladly took.

McLaughlin’s deep free-kick into the box beat the Stevenage defence to find the rising head of O’Toole, whose towering header beat Adam Smith and clinched the lead on 18 minutes.

Since alluding to his goalscoring threat after his full-debut at Sunderland, the 33-year-old has now added a goal in each of his last two starts.

The Stags entered a period of control following the goal, recycling possession and waiting for Stevenage to provide an opening to advance.

That opening was soon crafted by Rhys Oates’ intelligent run in behind the Boro defence on 36 minutes.

Though the in-form striker guided his effort narrowly wide of the bottom corner having gone one-on-one with ‘keeper Adam Smith.

The Stags again came close to doubling their lead before the break. Some brilliant work from a grounded George Lapslie inside the box, scooped the ball into the path of George Maris whose powered shot took a touch off a defender to fly wide of the goal.

Mansfield were almost made to pay for their squandered chances as ex-Stag Jamie Reid struck the same post for the second time in the half inside stoppage time.

Following a clash with Terrance Vancooten, Lapslie was replaced by midfielder Ryan Stirk having picked up a shoulder injury.

Mansfield exemplified their determined spirit as they piled on the pressure to retake their lead on 65 minutes. The ball arrived to youngster Ryan Stirk inside the box who used his quick feet to dance past the defender and coolly place the ball into the left side of the goal. The midfielder’s display of technical ability and composure earned the on-loan Birmingham City man his first Stags goal since joining in the summer.

On-loan stopper Nathan Bishop denied a powered effort from Jake Reeves with a superb save to deny the hosts with ten minutes remaining.

The introduction of Farrend Rawson from the bench ensured Mansfield remained resolute in the dying embers to see out a crucial victory. 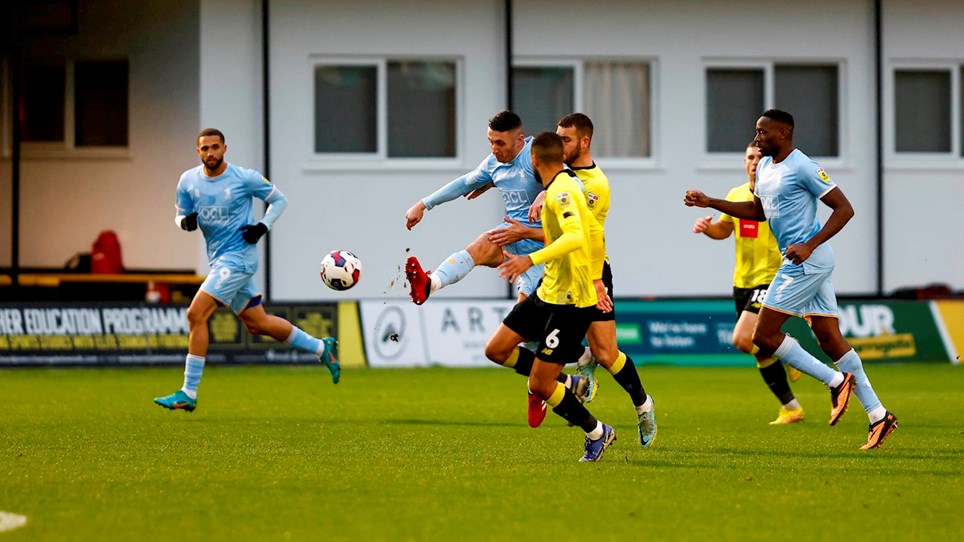