Boss Nigel Clough said it was ‘incredible’ to earn three points ‘so late on’ in today’s 2021/22 season opener against Bristol Rovers.

A crowd of 6,346, who attended the first competitive fixture with supporters at One Call Stadium in 540 days, were treated to a Danny Johnson winner deep into stoppage time from the penalty spot.

The manager, despite being delighted with making a victorious start to the new campaign, insisted his side’s play will improve in the coming weeks.

“It was incredible to score the winner so late on,” he told iFollow Stags. “We thought we were going to have to settle for a draw. I thought we did enough to win the game throughout.

“It was the wonder strike from their lad [Cian Harries] that got them back into the game.

“Then they went down to ten men, we put the pressure on and created a few chances. We got our reward in the end.

“I didn’t think we were brilliant in the first-half but we got the goal that put us ahead. We settled down and played in patches [in the second-half], but probably not as well as we’ve played over the last couple of weeks in pre-season.

“But when you have a big crowd with big expectations, I think it’s understandable that the players had a few nerves today. We’ll be much better from this point forwards.

“Rhys Oates got us going [in the second-half] and had a couple of shots. They got a few great blocks in when we had shots on target.

“To win in that manner on the opening day and have our two strikers get the goals [was great]. We had faith that one of them would get us the winning goal. 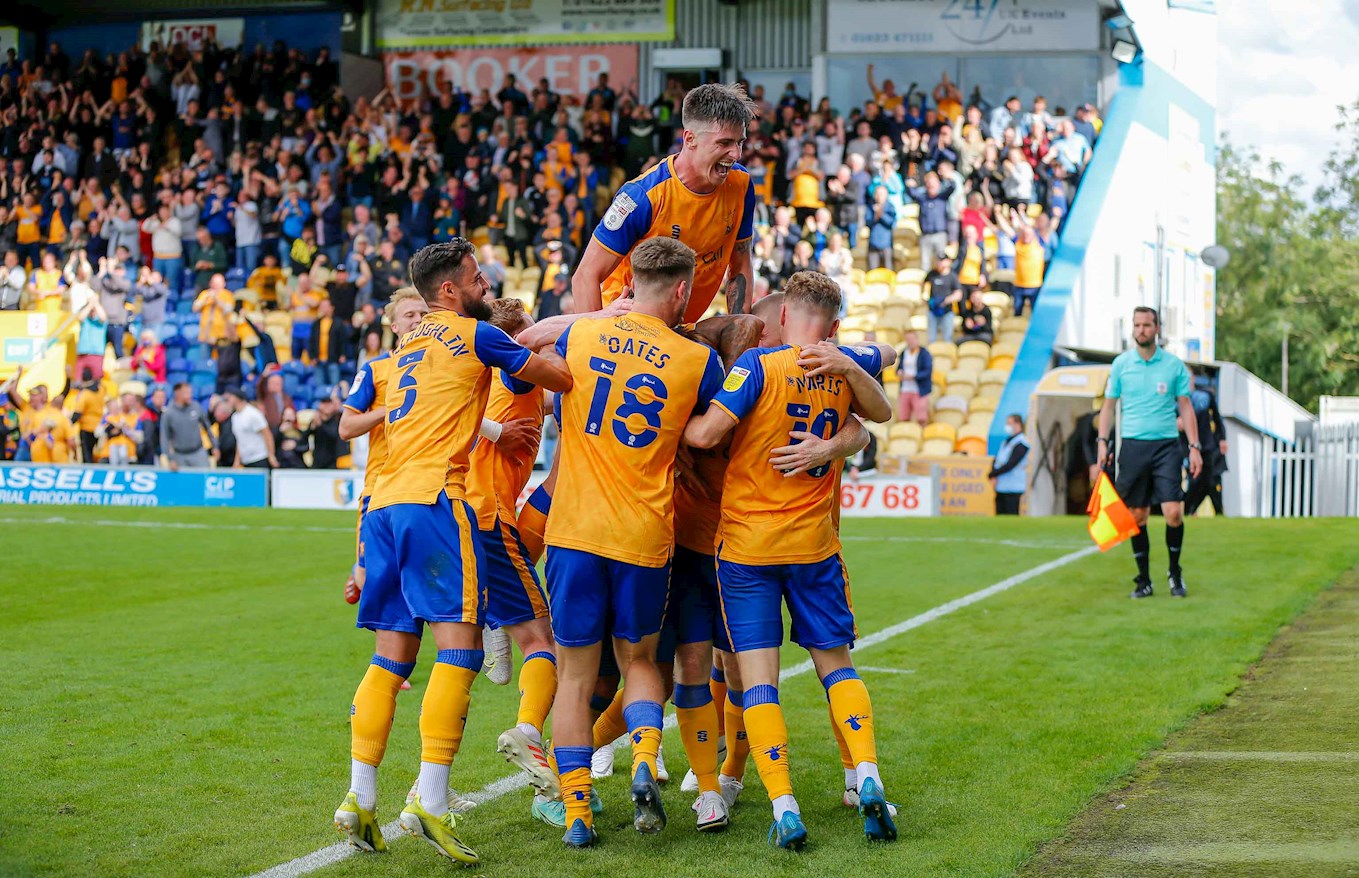 “We’ve got that [first] three points on the board. It’s nice to get the first one, so we’ll regroup ready for Preston on Tuesday.”

Speaking of the electric atmosphere generated by the Stags’ supporters during today’s game, Nigel Clough said his players must learn to ‘thrive’ on the noise made by the home crowd.

“The noise [was incredible]. It sounds that much louder because we haven’t heard it for 18 months,” he added.

“But even if it [late goal] was any week I think it would’ve been pretty good! I think for the crowd to go home on the opening day with that feeling is brilliant for them.

“They got behind us today. I think we can play better, but it [win] gives us a nice feeling going into the season.

“It [atmosphere] was great from the second we came out at five-to-three. We must learn to thrive on this atmosphere, because it’s in our favour.

“If you go elsewhere, you really feel that you’re up against it [home crowd]. [We should] embrace it and I think we did that today.

The boss also reflected on two key decisions made by referee Joshua Smith in the game, starting with the red card to Bristol Rovers captain Paul Coutts, following an off-the-ball altercation with Johnson.

“I think he’s just caught Danny Johnson (below) on the back of the neck. It’s the old phrase, that you can’t raise your arms in football. 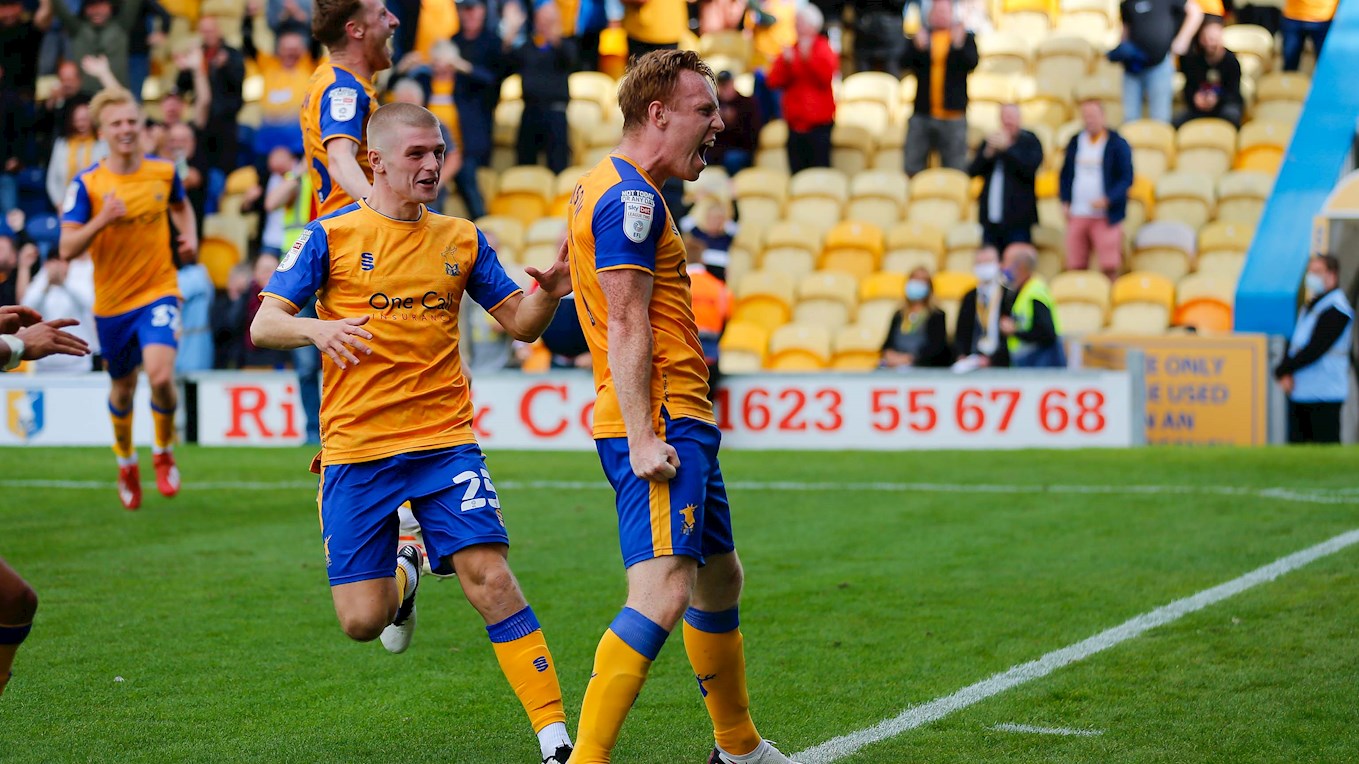 “We know Couttsy from Derby and he’s not that sort of lad, but the referee deemed it a red card.”

On the late penalty decision which led to the Stags’ dramatic winner, the boss added: “Our lads were saying in the first-half that they were being held a lot.

“I thought we saw a lot of tussles, and it’s not in the interest of the attackers to hold anybody. He [Mark Hughes] held onto him [Hawkins] for a long time.

“The referee was three yards away and had a very clear view. It was immense pressure [on Johnson], especially when you’ve just missed a chance. But he stepped up.”