First team coach Jamie McGuire has challenged the Stags to play ‘on the front foot’ against high-flying Cheltenham Town this Saturday.

Mansfield will travel to the Jonny-Rocks Stadium to face the Robins, who currently sit third in Sky Bet League Two.

Former Stags’ midfielder McGuire says that the amber and blue must put their ‘stamp’ on this weekend’s fixture.

“We have to ‘go after’ Cheltenham,” he told iFollow Stags. “There are some very good teams in this league, and Cheltenham is one of them.

“I think we have to make it about us and go after Cheltenham. We have to put our own stamp on the game as a team, and hopefully we can do that on Saturday.

“We have to be in their faces and on the front foot. We have to take the game to Cheltenham and that’s what the fans want to see.

“If we put a passionate performance in, that’s what this town is about. The fans want that and they want to see the team [play] like the town [is], hard-working. 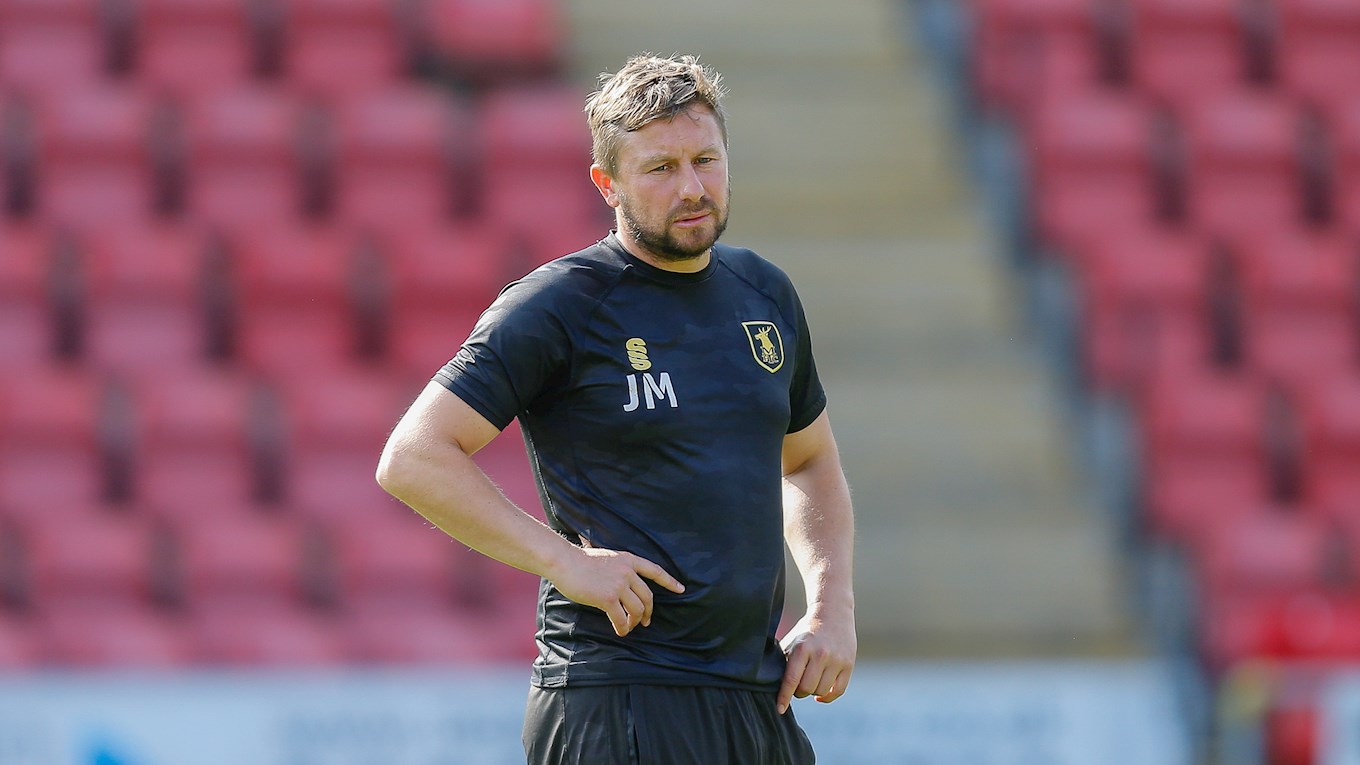 “We have to make it [Cheltenham game] about us and make sure we put in a positive performance. We have a lot of energy and we have to bring that on Saturday.”

Reflecting on Tuesday’s 1-1 draw with Morecambe, McGuire was impressed with how the Stags reacted to conceding an early goal.

“We went out there and conceded a goal in the first few minutes,” he said. “But the lads rolled their sleeves up and after that, we were the better team.

“Harry Charsley’s goal (below) was a really good team goal and the build-up was really good. The first-half was a good performance. 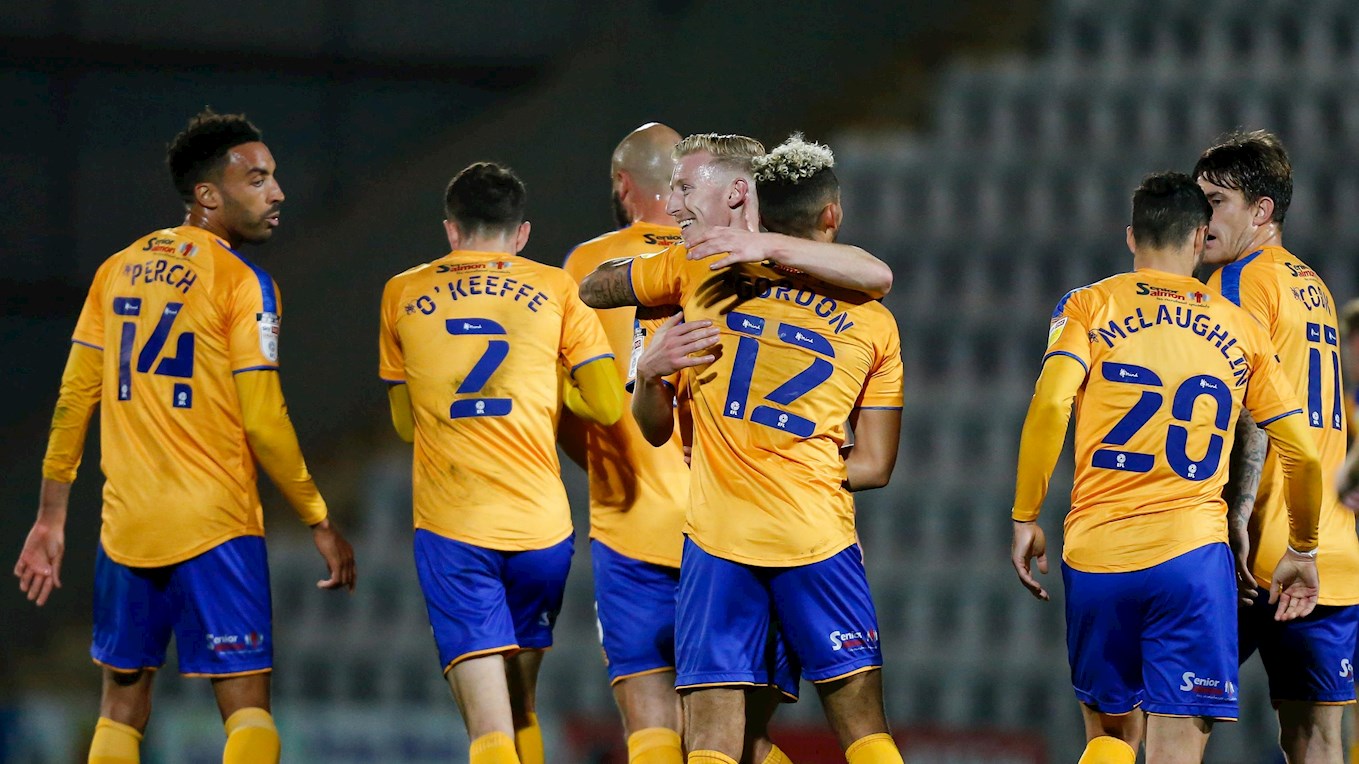 “We had to dig in as a team in the second-half. We had little half chances – Stephen McLaughlin’s free-kick, the ‘keeper has pulled off a great save.

“The mindset of the group is really good. They come in, work hard and we’re getting there. We just need little key moments in games to fall for us.”

Earlier today, it was confirmed that defender Mal Benning (below) has tested positive for COVID-19. Commenting on the wing-back’s test result, McGuire added: “Mal’s wellbeing was a bit of a sign [of concern] for us and the doctor – we’ve kept him away from the building and he’s ended up having a COVID test. His test has come back positive.

“It’ll be ten days [of self-isolation for Benning]. The doctor and the medical team will take care of that, but Mal has to stay away now.

“We kept him away anyway, because of his wellbeing, with the protocols in place at the club.

“The biggest thing for Mal now is that he comes back nice and healthy. He’s in good spirits and we wish him all the best.” 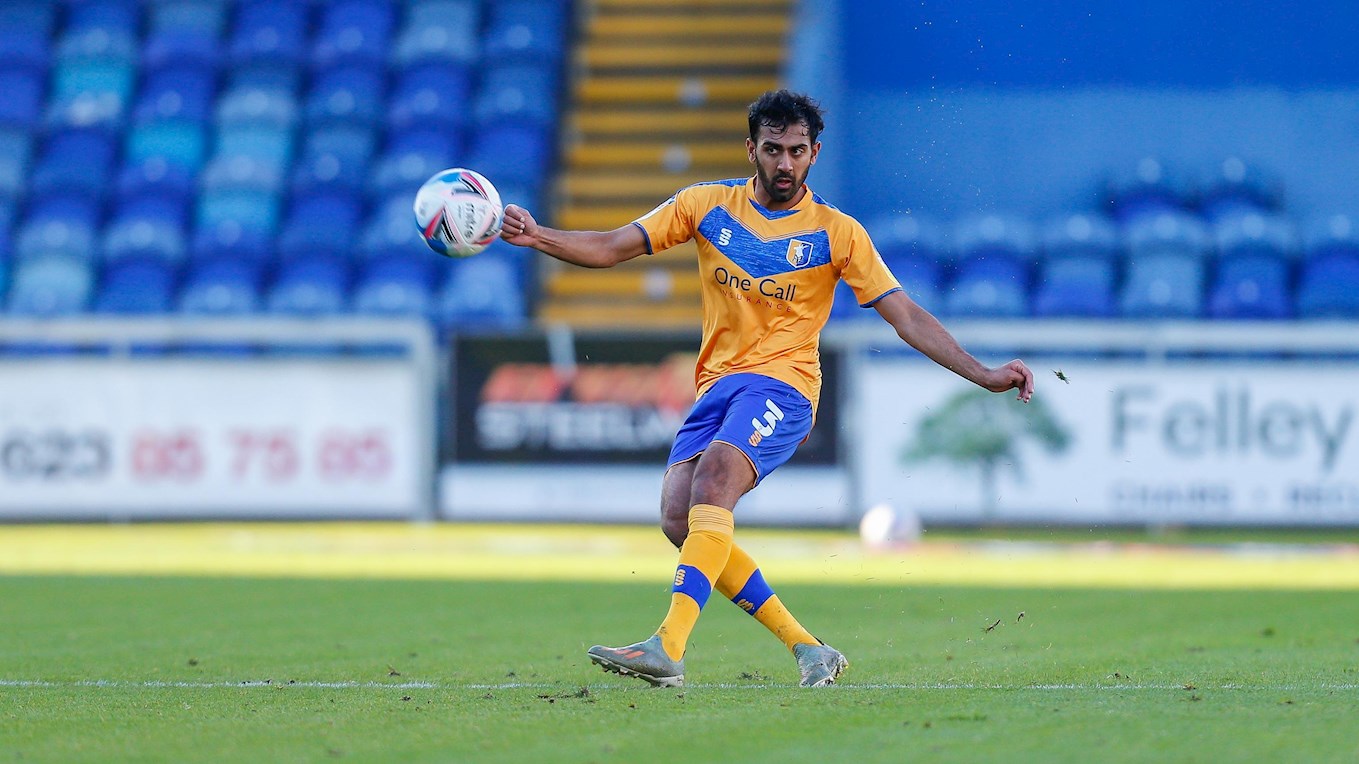 McGuire also says that the Stags have a clean bill of health from Tuesday night’s match, and also provided an update on midfielder Ollie Clarke, following last week’s news that he is out with a calf injury.

“Everyone is fine, there are no knocks or bruises and the lads reported in on Wednesday after the [Morecambe] game.

“Ollie [Clarke] is a week-by-week process. He’s with the medical team and they’re dealing with him on that.”

Match passes are available for Saturday’s fixture and can be purchased for just £10 here.