Mansfield Town bowed out of the EFL Trophy after a 3-1 defeat to Sky Bet League One Lincoln City on Tuesday evening.

Rollin Menayese grabbed his second goal in Stags' colours with a firm header from a corner, yet three prior City goals ultimately left the hosts with too big a task in NG18.

In the first half, Jamie Soule opened his Imps account on his debut before Anthony Scully and Theo Archibald added to the scoresheet to rubber stamp proceedings.

Mal Benning, Aaron O’Driscoll, Kellan Gordon, Harry Charsley, Tyrese Sinclair and Jordan Bowery were the individuals brought into the line-up as five others maintained their places from South Wales.

An evenly-contested battle ensued in Nottinghamshire despite little notable action at either goalmouth in the early moments.

The Imps attempted to dominate possession and intricately feed balls through the Stags’ defence – but found success hard to come by as Jorge Grant fired wide from distance on the half-hour mark.

Soon after, Charsley collided with Conor McGrandles and the subsequent loose ball ran towards Sinclair who darted forward and also decided to pull the trigger from range.

And it would take City until the 31st minute to find an opener.

Remy Howarth made headway across the left flank and watched his drilled effort fall kindly into the path of Soule who was placed to touch the ball over the line.

Mansfield quickly set upon finding an equaliser with Gordon when the wing-back found space after cutting in from the far side but his shot was clutched by Ethan Ross.

The Imps threatened once more towards the dying embers of the first period – via Archibald – but his effort rippled the side netting instead.

Into the second period and Scully was initially denied one-on-one by a sprawling Stone save before his second bite at the cherry produced a two-goal cushion for Michael Appleton’s men.

From the right-hand side, Imps’ No. 11 rifled his effort across the face of goal, against the upright and into the back of the net.

A triple change was then in the offing for the Stags as Alistair Smith, Stephen McLaughlin and Nicky Maynard were introduced at One Call Stadium.

But just after the hour mark the away side pounced for a third.

Nobody in the Stags’ defensive line were able to deal with a long, high ball over the top and Archibald nipped in to chip into an empty net.

There was, however, a glimpse of hope for the hosts when Benning’s pinpoint delivery from a corner met the onrushing Menayese who planted his header firmly beyond Ross.

It seemed to invigorate the amber and blue as they sought another strike in quick succession. McLaughlin looked to be the man to do so but watched his fizzed drive be tipped expertly around the post by the City ‘keeper.

The Group E fixture was never able to be resurrected by Mansfield – despite Gordon’s skill allowing him room for a shot that was blocked on the line – as they exited the EFL Trophy.

Attentions will turn back to Sky Bet League Two on Saturday when Graham Coughlan’s side entertain Stevenage at One Call Stadium.


Mansfield Town were dealt a 3-1 defeat against Bradford City at One Call Stadium on Saturday afternoon.


Following a goal in either half, Mansfield Town’s under 18s experienced a 2-0 loss in their first EFL Youth Alliance Cup fixture of the season against Burton Albion.


Mansfield Town and Stevenage played out a goalless draw to each take a solitary point from Sky Bet League Two action at One Call Stadium on Saturday afternoon. 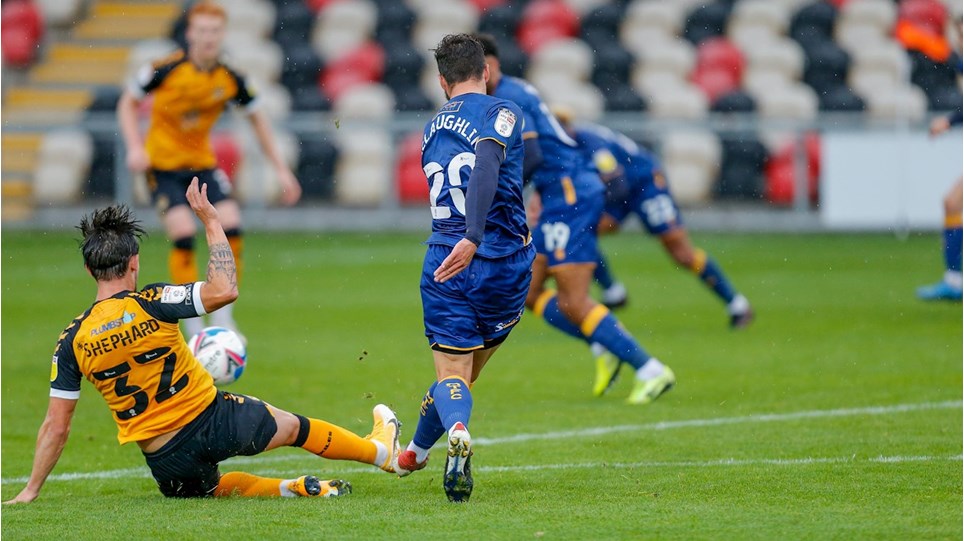 
Despite a positive display at Rodney Parade, Stephen McLaughlin’s first Mansfield Town goal was cancelled out as Newport County earned a 2-1 victory on Saturday afternoon.