Mansfield Town manager Nigel Clough says he wants his players to be ‘excited’ by Sunday’s Emirates FA Cup match against Dagenham & Redbridge, with a victory potentially setting up a Third Round tie against top flight opposition.

The Stags saw off Sky Bet League One Sunderland away from home in Round One, with on-loan midfielder George Lapslie netting the game’s only goal in the second-half.

The boss says he is looking for a reaction from Tuesday’s 1-0 loss to Harrogate Town, and has also warned his players to guard against complacency this weekend.

“We have to pick ourselves up [from Tuesday] and go again in the FA Cup,” he told iFollow Stags. “We want to start well and brightly, which is our intention in all games.

“I would hope that we can impose ourselves on Dagenham on Sunday, and with all of the effort and endeavour that’s been going in over recent weeks, we can start creating some chances and scoring some goals.

“They [Dagenham & Redbridge] are a good, solid Conference side. They’re athletic, have a bit of pace, and the confidence that they’ll have by beating a League Two side [Grimsby] in the last round, they’ll be looking forward to it on Sunday. 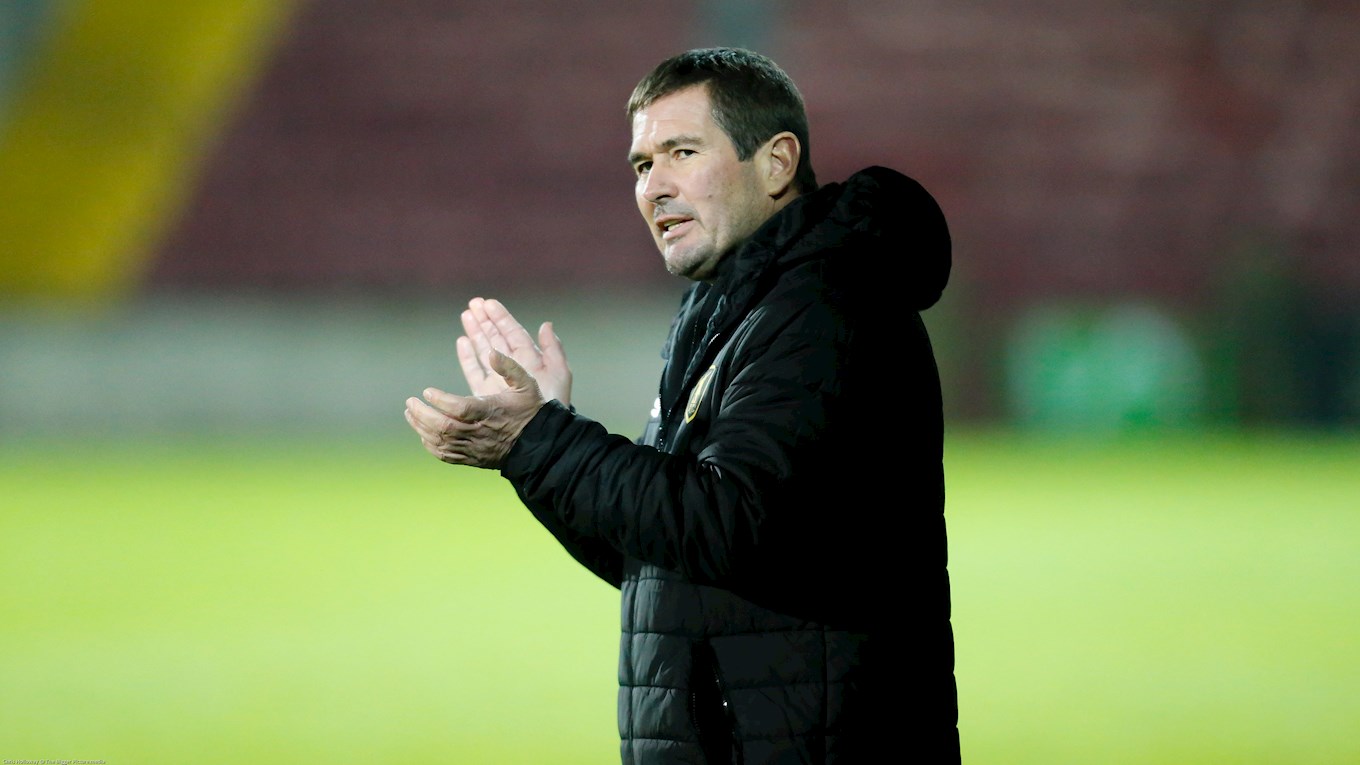 “They’ll see it the same as us – an opportunity to get in with the big boys in the hat for the third round.

“This game will be just as difficult [as the Sunderland game], but in different ways. Dagenham will give us problems, and if we’re anything below giving our best, we’ll have problems.

“Supporters, although they’re not coming in the stadium, it [cup run] can give them a lift and a boost that everyone is looking for.

“The biggest thing is winning the game on Sunday, and generating confidence that we can take into the league games.

“The biggest message is about how we went to Sunderland as the underdog and enjoyed it, playing with an element of freedom.

“I think Dagenham will do exactly the same, so it’s a role reversal on Sunday. We have to guard against any complacency. I also want the players to be excited about the third round and what prospects that can bring.”

The manager reacted to Thursday’s news that Nottinghamshire remains a Tier 3 restricted area under the government’s coronavirus measures, meaning that the Stags will continue to play their home matches behind-closed-doors.

“I think it [Tier 3 announcement] was pretty much expected, but we’re still disappointed,” he explained. “I think it’s great for those clubs who can allow some supporters in, but I think it should be uniform all across football.

“Until all clubs can allow some spectators in, I think it can give an unfair advantage in some ways.

“Everybody wants financial help within football, and getting fans back in will certainly help clubs, but it won’t help them all. I’d like to see a level playing field for all clubs.”

The boss also revealed details of a friendly played between the Stags and Burton Albion on Wednesday, a game the amber and blue won 3-1. 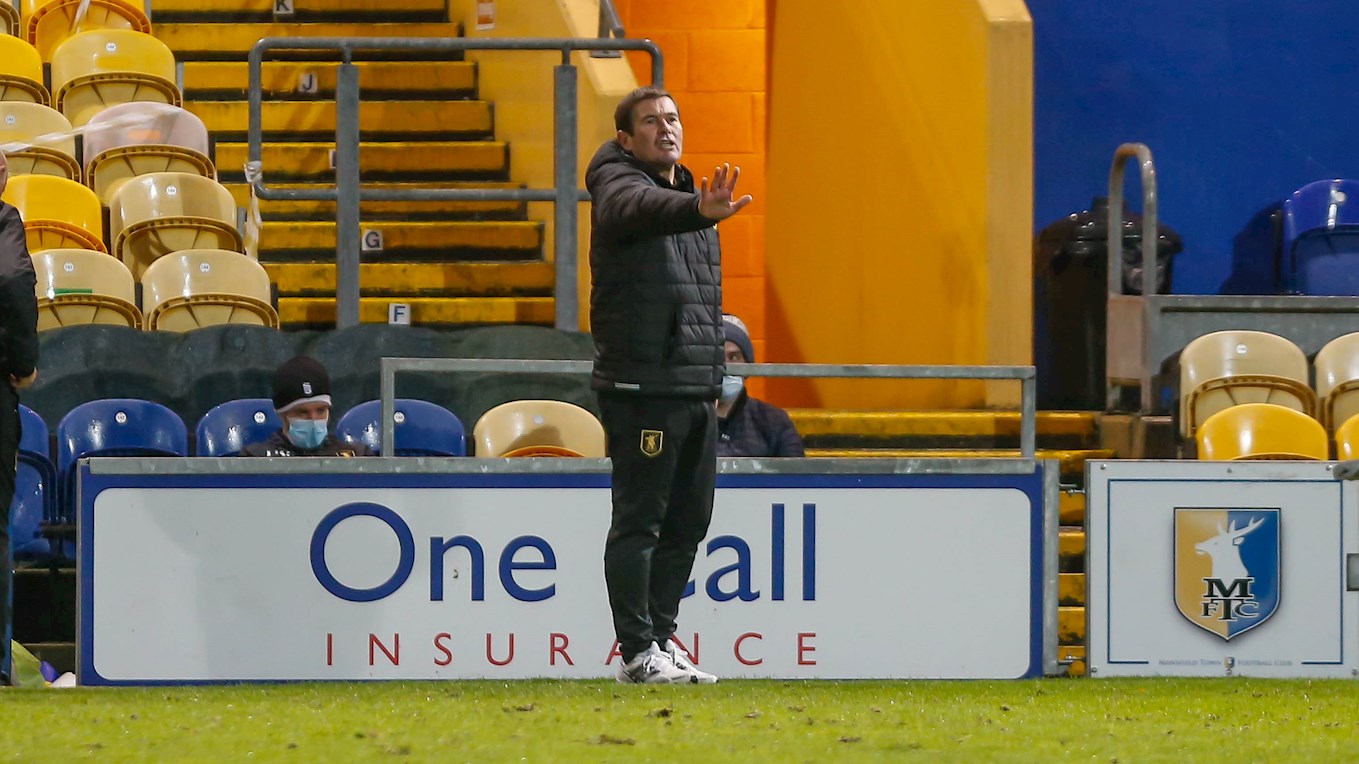 “We played [against Burton] on Wednesday at St. George’s Park. The subs and the young lads all had a run out – they all did very well and put a lot into the game.

“We won 3-1 – results don’t matter in those games, but it is nice to win. Everybody did well. You’re looking for attitude and work rate in those games, and it was there.

“Corey O’Keeffe put a free-kick in the top corner in the first-half, Cooky [Andy Cook] then scored, and then Tyrese [Sinclair] scored with another free-kick late on in the game.

“In those games, we’re looking for people who want to be in the team.”

Ahead of Sunday’s Emirates FA Cup fixture, there was an injury update from Nigel Clough, who said: “We have a couple of knocks from Tuesday and the few games before that, so we’re going to put out the best side that we can on Sunday. 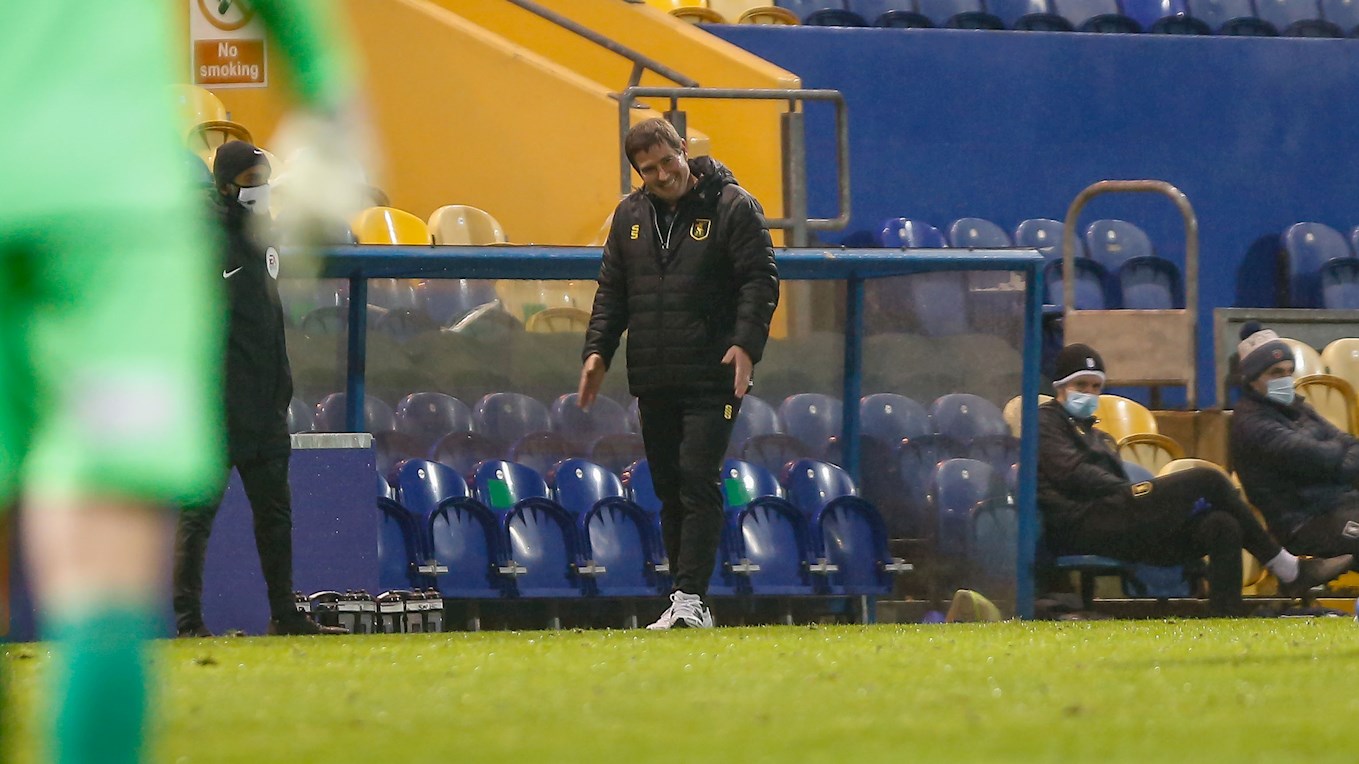 “We’ll keep a close eye on them – we’ll monitor them over the weekend, and they might be alright.

“But I think having three games in six or seven days might be too much for some of them. It’s not a case of prioritising [fixtures], it’s a case of how it’s fallen.

“George Maris is back in training but it’s all about how he feels. If he gets another bang on the rib area, he may be in a lot of pain again, so we’ll just monitor him.”