In Monday afternoon’s news conference, manager Graham Coughlan offered his thoughts on Saturday’s 1-1 with Morecambe, while also speaking about Tuesday’s game against Leyton Orient, first team injuries and his approach to the rest of the season.

Mansfield conceded a frustrating late equaliser last time out against the Shrimps, a game which the manager says his side ‘controlled’ for the majority.

The boss says that it is just ‘little bits and pieces’ that are ‘hurting’ his side at present.

“I was really annoyed and frustrated that we didn’t see the game through as we were in total control of it.

“There was a little lack of concentration at the back which has cost us the game. Those are the small little details of frustration that we’re going through.

“On the whole, we were again the better team and controlled large periods of the game. But it’s those little bits and pieces late on in the game that are hurting us.

“To go away from home in a tough, tense, nervy affair, I thought we controlled the game really well. We defended anything that was chucked at us really well, but again, it is just that killer moment where we switch off.

“I can see a lot of progress and development. If we can tidy up those one or two little incidents, it should all come good for us.

“I look back at the video and we played some good stuff in testing conditions. We managed the game really well and got into some lovely areas.

“It wasn’t a spectacle, but we did a really professional job for around 85 or 86 minutes.”

The boss says that, despite having a rough 50-point target, his side will be maintaining their ‘game-by-game’ approach for the rest of the season.

“I’ve taken a few bumps and bruises since I’ve come in but I’m still smiling and working hard to fix it,” he added.

“Like I said last week, I have every confidence in this club and team to correct this and put something together.

“I keep mentioning the fans week-in, week-out, but to back the boys like they did at Morecambe, it bodes well at this football club.

“We have a good group of professionals here and they’ve taken on board what we’ve said.

“It [approach] has to be game-by-game. When I came in, we didn’t set a points target, but I would have to say that 50 to 52 points is the main goal.

“You’re looking to reach that as quickly as possible and then you can adjust and realign. But I just want to win the next game, that’s the way we’re built.

“The results are not quite there, but I can assure you that they will come. The work rate and commitment that this group is showing, that will be rewarded at some stage.

“I have to look at the positives. Yes, we are a work in progress, but I do think we are making progress on and off the pitch.”

Looking ahead to Tuesday’s Sky Bet League Two game away at Leyton Orient, the boss added: “They [Leyton Orient] have been similar to ourselves. They’ll have probably found it a bit frustrating as they would want to be a little higher.

“On Saturday they got done late on, so we’re not the only club that concede late on in games – it’s part and parcel of the game.

“It [preparation] is 90 percent ourselves and ten percent them. I wouldn’t like to go overboard on Leyton Orient – we know what we know about them.”

The 45-year-old also revealed that ‘a couple of seniors’ will feature in tomorrow’s reserve fixture away at Doncaster Rovers, a 1pm kick-off at Cantley Park. 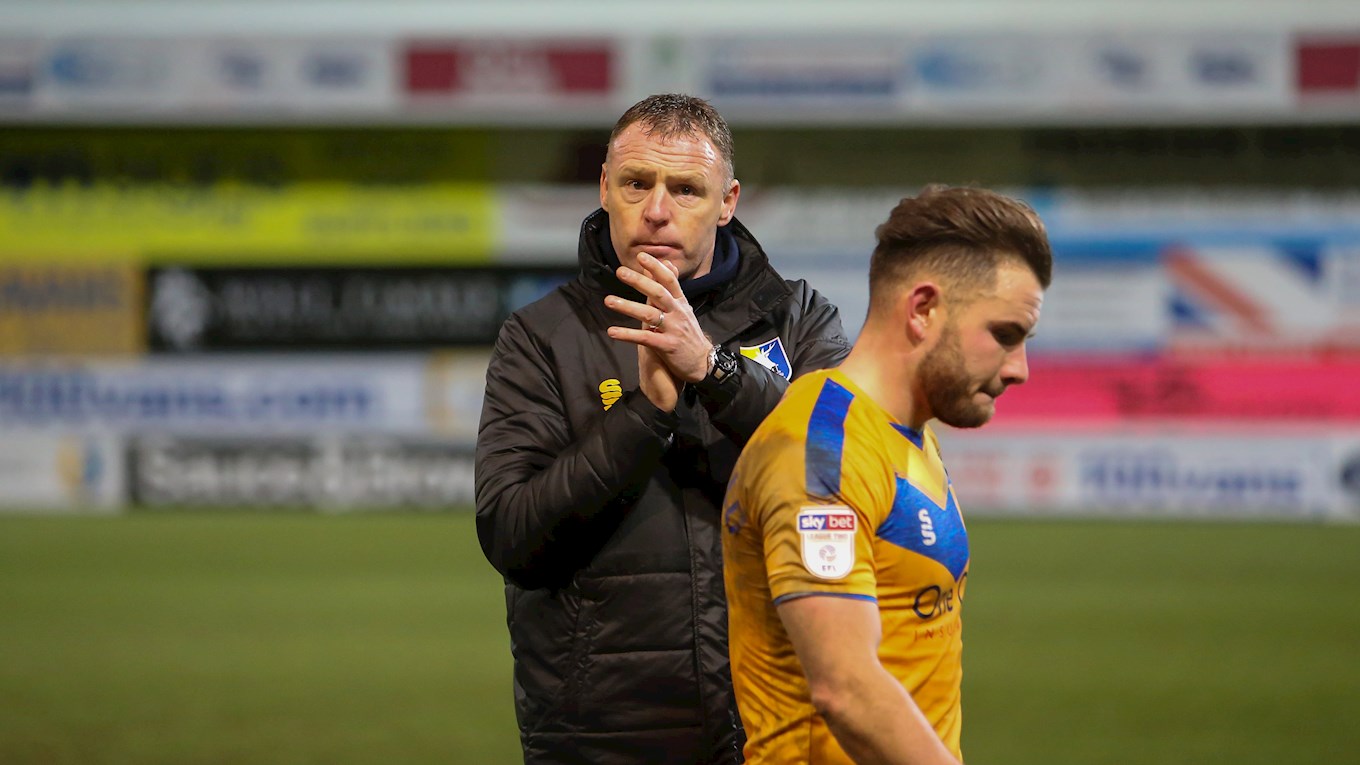 “There will be a couple of seniors who are not quite featuring in our first team squad or coming back from injury.

“I like to have some seniors around the juniors, because if you have good seniors, you’ll have good juniors.”

There was also an injury update from the boss ahead of Tuesday evening’s game in London.

“He [Harry Charsley] suffered a nasty one [against Morecambe], which should have been dealt with by the referee. We felt really aggrieved on Saturday as it was a bad challenge.

“It was an elbow to the face and that was unsavoury. He’s a tough lad and he’ll get on with it.

“Macca [Alex MacDonald] is coming on well. He’s back out on the grass so fingers crossed, he won’t be too far off.

“As we expected with a grade one [hamstring] tear, it was always going to be two or three weeks – but he’s making good progress. 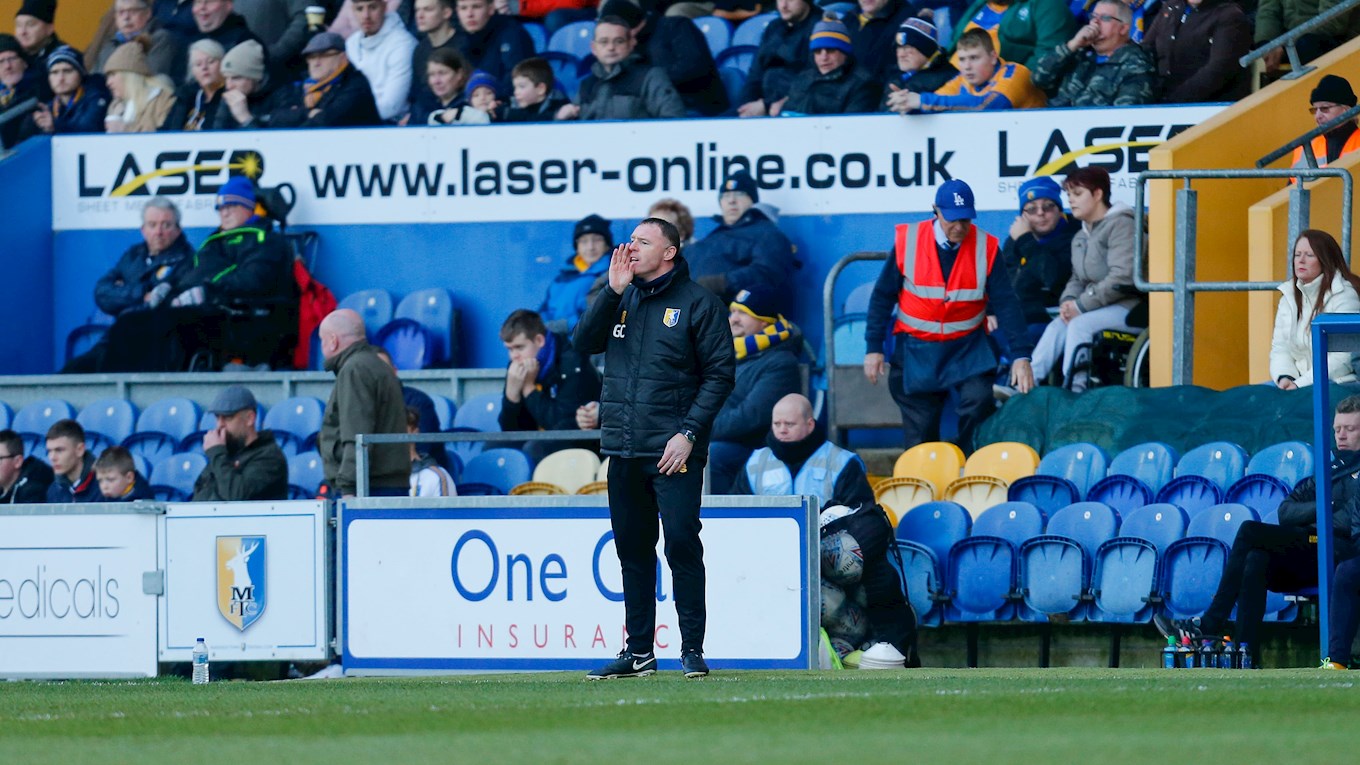 “Hayden [White] is a lot closer [to return] than Kellan [Gordon]. It’s frustrating that we haven’t seen young Kellan play either.

“Hopefully we can get him out on the grass soon and have a look at him, he deserves that opportunity and chance.

“Hayden is not far off and Macca is not far off. The injuries and bits and pieces we’ve picked up in my time here are nothing too serious and long may that continue.”