Stags produced a spirited display in two matches of 60 minutes against a strong Peterborough United outfit, during a behind-closed-doors friendly which finished 2-0 to the Posh.

The fixture, contested at the club’s training ground, saw two separate teams fielded in each hour.

In the second hour, ex-Luton ‘keeper Marek Stech was in goal, whilst new frontman Jamie Reid joined the attack.

Moments later, Jordan Bowery pounced on an unconventional Posh clearance, but saw his right-footed shot parried away by visiting shot-stopper Dániel Gyollai, after advancing towards goal.

At the other end, Siriki Dembélé – Posh’s star man – dragged a shot wide in the sixth minute.

Stags’ promising start continued when George Maris forced the game’s first corner after 10 minutes, which was flicked away by the Posh defence.

Mansfield goalkeeper Aidan Stone was then called upon for the first time, bravely getting to ground to deny Dembélé who had been slid through inside the penalty area.

With the match 20 minutes old, Charlsey saw a 22-yard attempt charged down.

The midfielder turned provider two minutes later when his swinging right-sided cross fell to Smith, who struck wide inside a crowded box.

Following a short interval after 30 minutes, Stags conceded a penalty within two minutes after youngster Aidan Walker clipped the legs of the menacing Dembele.

The 23-year-old made no mistake from the spot, as his right-footed strike bent into the top-corner.

With 13 minutes of the second period played, right wing-back Kellan Gordon drifted in a cross and Bowery was only inches away from connecting.

Ward’s cross was met by Mo Eisa, but Stone was in encouraging form, making a fine low stop to push out the striker’s effort.

A superb pass by Harrison Burrows picked out George Boyd on the left, who smashed his shot home, leaving Stone powerless.

There was a complete change of personnel after an hour, with Stags’ new-look XI including an unnamed trialist, who did his future chances no harm with a clever flick away from goal following a Posh cross from the right.

At the opposite end, teenager Tyrese Sinclair flighted an excellent ball into the box but a stooping Andy Cook was offside. 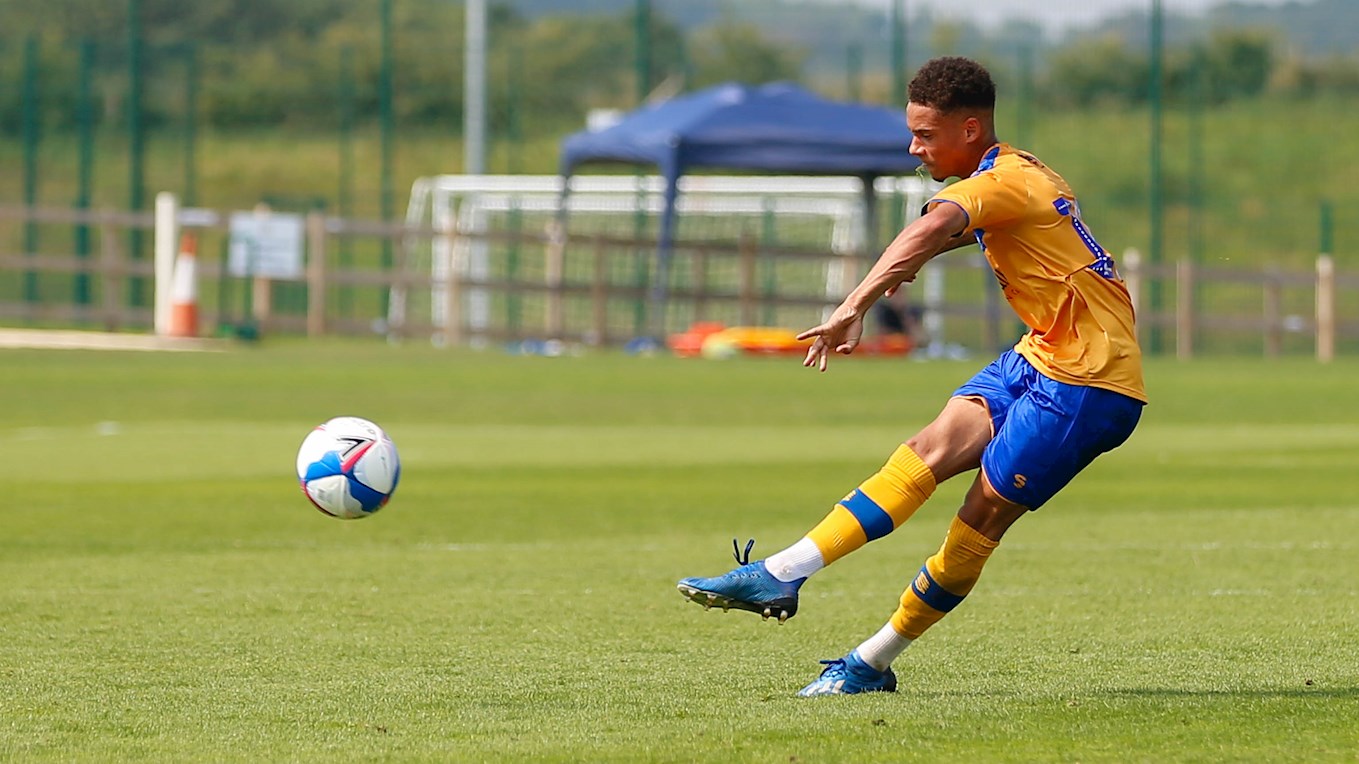 Benning was then caught by the assistant referee’s flag, striking wide following a purposeful cross from Sinclair.

Serhat Tasdemir, the Posh midfielder, tested the hands of goalkeeper Stech, who pushed away his attempt with 78 minutes played.

Three minutes later, Andy Cook was alert to a weak pass by the Posh goalkeeper, though his shot was charged down as he looked to open fire.

With 90 minutes on the clock, the energetic Sinclair struck a free-kick against the top of the Peterborough wall from almost 30 yards, which spun behind for a corner.

Following another short break under glorious sunshine, Stags’ frontman Jamie Reid jinxed his way to the edge of the Posh box, only to see his attempt blocked. 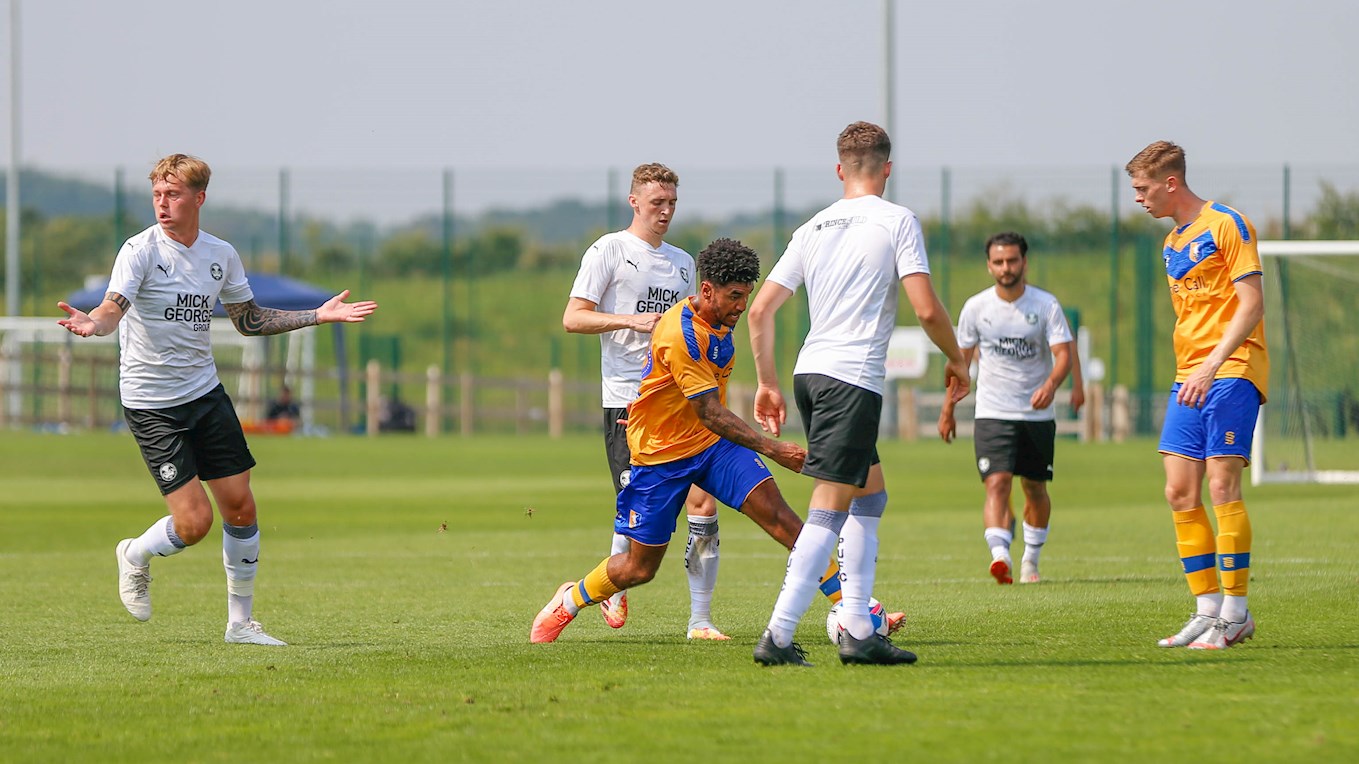 Stags pushed their foot on the gas and Sinclair embarked on a roaming run towards goal, steering his low effort just beyond the post from outside of the box.

With 14 minutes to play, Sweeney was wrongfully adjudged to have upended Ricky Jones, though it mattered little as Jack Taylor sent the 22-yard free-kick over the bar.

Seven minutes from the end, Stags had a penalty appeal turned down after Benning's shot into the box may have hit a Posh hand.

Reid saw a shot blocked from the edge of the box in the closing moments, before the referee called time on 120 minutes of action.

Stags will be encouraged by their efforts in a match against League One opponents, as their pre-season preparations for 2020-21 are now well underway.


Mansfield Town under-18s made a winning start to their EFL Youth Alliance campaign with a 1-0 victory over Bradford City under-18s on Saturday.


Mansfield Town concluded their opening Sky Bet League Two contest with just a point, despite a dominant performance against Tranmere Rovers at One Call Stadium.