Stags’ boss John Dempster says he is ‘determined’ to bring success to Mansfield Town and add to his achievements as a player and academy chief at One Call Stadium.

As a player, Dempster was a mainstay in the famous class of 2013 - as Stags won the Conference National League crown - before he launched the club’s youth academy,  which saw him win three out of four league titles.

His first team charges face Scunthorpe United at One Call Stadium this weekend as Stags look to ignite their 2019-20 campaign.

The Mansfield chief says that his side must show ‘courage, character and fight’ in order to secure maximum points against Paul Hurst’s side.

“I’ve never been more determined to bring success to this football club,” said the boss. “It’s a club I’m passionate about and one I have a strong allegiance with.

“I’ve given seven years’ service to the club. Believe me when I say that I’ll be giving everything to this football club like I always have done.

“I’ve learned that we set high standards and when we fall short of that, we have to be honest with ourselves.

“We went away to Exeter and were beaten by a disappointing goal – one goal. I think we were coming back into the game before the [Ryan Sweeney] red card happened, but I don’t want to paper over the cracks.

“We’re going to have to show courage, character and fight [on Saturday against Scunthorpe]. We’ll be concentrating on ourselves.

“I have no doubt that Scunthorpe will, over a period of time, will climb League Two. But we have to make sure it’s not Saturday.

“If we show the courage, fight and passion which is within our squad, I’m sure we can get all three points.

“It’s a game that we have to give everything in to get the three points. Saturday is a massive game and we need the supporters behind us.”

“We’re hoping that Bish [Neal Bishop] will train on Thursday or Friday. Whether he will be able to feature on Saturday will remain to be seen.

“Andy Cook will be back training next week as well, which is a boost because he brings something different to the table.

“Bobby [Olejnik] is doing brilliantly. He’s training full-time now and is involved in the practise games. We just need to be careful as he’s been out for a number of months now.

“He needs that time to get up to speed. But he’ll be well in contention over the next couple of weeks, which is a massive positive.

“Craig [Davies] has had another injection in his ankle which we’re waiting to settle down, but he’ll be back training and running from Monday.”

The Stags announced on Monday that Leeds United defender Conor Shaughnessy (below) had joined the club on a season-long loan, the last deal completed by the amber and blue before the transfer deadline. 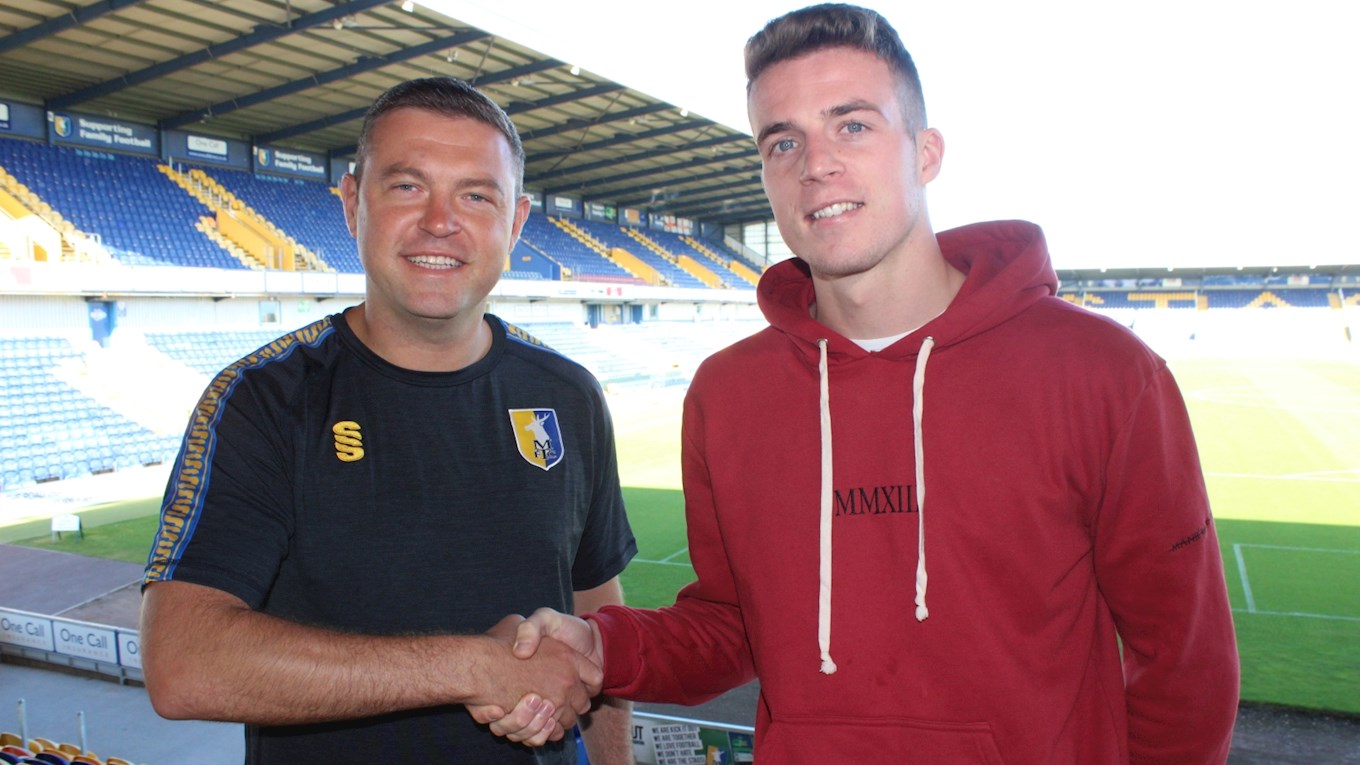 The manager spoke of what Shaughnessy will bring to the Mansfield ranks, along with a reflection on the summer transfer window.

“He [Shaughnessy] is someone we’ve been chasing for a while. He’s a physical specimen and someone who can play in midfield and defence.

“He’s good on the ball and can use both feet. But he can also play in the middle of our back-four or any one of the three positions in a back-three. He brings strength and depth and he’s got a brilliant reference from Leeds United.

“The fact that he can play in a number of positions will benefit us massively. He’s got experience playing in midfield and defence.

“We were talking to a large pool of players. Some of the loan fees that other clubs were demanding were ridiculous. We’re happy with the business that we’ve done – we’re not going to have people trying to fleece the football club.

“It’s been really good business and we’re pleased that the window is closed because we know that we need to work with this group of players and drive forward from here.”

One piece of team news that could be confirmed as early as Tuesday afternoon is the availability of defender Ryan Sweeney, who was harshly sent off in Saturday’s defeat to Exeter.

The manager spoke of the club’s decision to appeal the red card.

“We’ll get the result of the [Ryan Sweeney red card] appeal today at some point. The officials on Saturday will feel conned looking back at the footage. 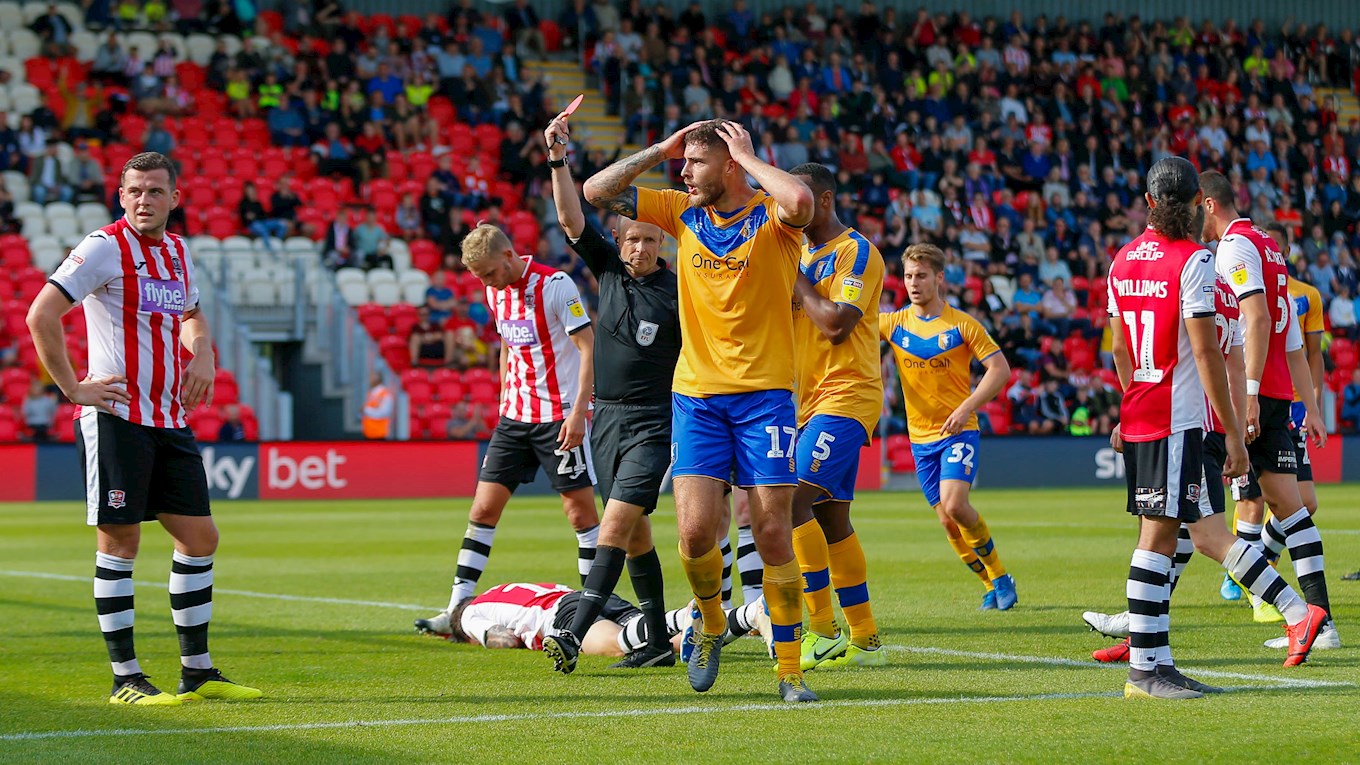 “The player involved [Ryan Bowman] will look back at that footage and feel embarrassed. It’s something that you don’t want young players looking at or copying.

“It’s not for me really. Faking injury like that and rolling around on the floor, for me is embarrassing.

“You look at Sweeney’s reaction and he couldn’t believe to see the player rolling around on the floor.”