Stags’ boss John Dempster has reflected on his first ten league games as manager of Mansfield Town, saying that he has ‘learned to no end’ and has ‘never been more motivated’ to achieve success with the amber and blue.

His comments follow what was arguably Mansfield’s best performance of the season to date away at Port Vale on Saturday, a match in which they were denied three points in stoppage time by a scrappy Nathan Smith equaliser.

The manager believes that the Stags have ‘turned a corner’ and he is prepared to ‘embrace the challenge ahead.’

“To say that I’ve learned a lot and experienced a lot [in the first ten games] would be an understatement,” he began.

“As a landmark of ten games, I feel like I’ve been through a lot. I’ve learned to no end from the experiences I’ve had and the mistakes I’ve made and I’ve never been more motivated and more confident that we’ve turned a corner.

“I’ve played in successful teams and over the course of the season there are ups and downs. What you have to do is remain strong and positive. If you can ride out the bad times and embrace the good times, that’s what successful teams do.

“I’ve learned a lot about myself and a lot about human nature. I’m certainly a stronger person for it. It’s definitely hardened me and I’m going to embrace the challenge ahead.”

Speaking about last week’s backroom alterations, the manager added: “It’s important that we all come together and I feel like we have. We made some changes last week which was tough, as the three members of staff that left [goalkeeper coach Ian Pledger, fitness coach Daryl Taylor and senior performance analyst Dan Ashby] were all good servants for the club.

“But we felt like we needed fresh impetus. Going on into the future, Conrad Logan will lead the goalkeepers.

“Drewe Broughton [performance coach] has vast experience in football from playing, which led him into the fitness work when he retired and into the work he’s been doing most recently from the mental point of view. He will add value in both of those departments.

“He is someone that brings energy to the group and is inspiring. He is a great person to have around and is someone I can bounce ideas off.”

The boss reflected on Saturday’s hugely ‘positive’ performance at Vale Park, and asked for more of the same this weekend when Mansfield host Plymouth Argyle.

“There were a lot of positives [from Saturday’s match with Port Vale],” he said. “The group and I feel we’ve turned a real corner.

“The level of performance was high. Man-for-man, they [players] performed really well and we’ll be asking for more of the same on Saturday [against Plymouth].

“When the players play with that bravery and intensity, not only will we be successful, but it’s great to see.

“What you have to be aware of is, when you’re asking players to be brave in pressurised situations, you have to remember that they’re human beings and they might make mistakes. 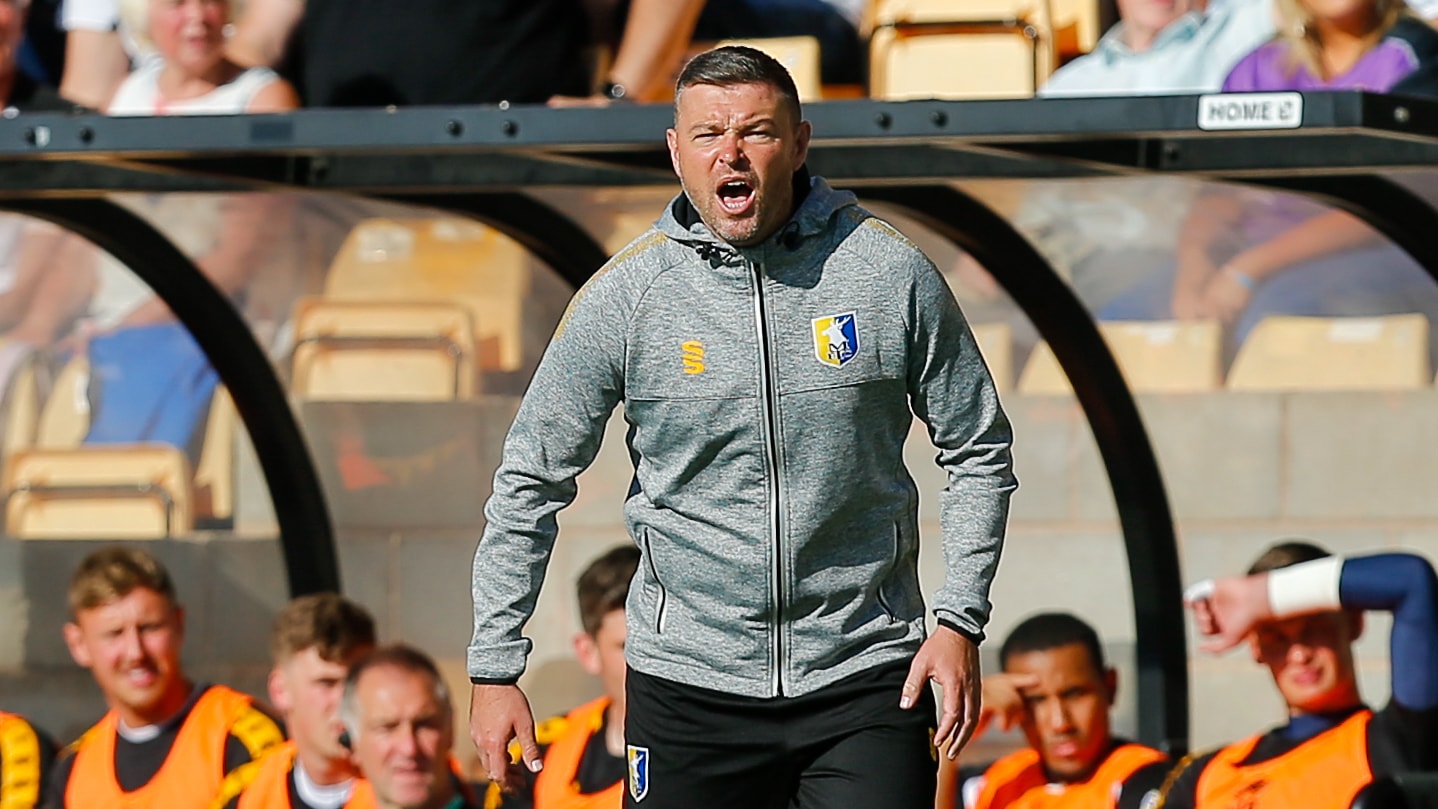 “We have to correct that and make sure we’re at our very best consistently. If we can tighten up in those crucial moments, we’ll go up the league table.

“One thing that was great to see [after Port Vale] was the players’ reactions in the dressing room. There was a lot of emotion and that’s what you want. You want to see people that care and put it right.”

Continuing his analysis of the Port Vale match, John Dempster hailed the travelling support from the Mansfield faithful, the Stags’ largest away following of the campaign with 679 making the journey to the Potteries.

The boss says that the ‘incredible’ away support reminded him of previous big games he featured in as a Mansfield player.

“How we were supported by the amber and blue army on Saturday was incredible. The noise they made, it sounded like thousands. It sends a shiver up your spine when they’re at full voice.

“Speaking to the players after the game, what is apparent is that the supporters make a real difference to them.

“I understand that there is frustration but what I would ask for is full backing to the players because I think on Saturday in particular, the noise they made was incredible.

“They [players] talk about the support and about being with them. They understand that it’s up to us to give them something to sing about.

“When it [support] was echoing around Port Vale’s stadium, it was fantastic and brought memories back of the big games that I’ve played in for the club. 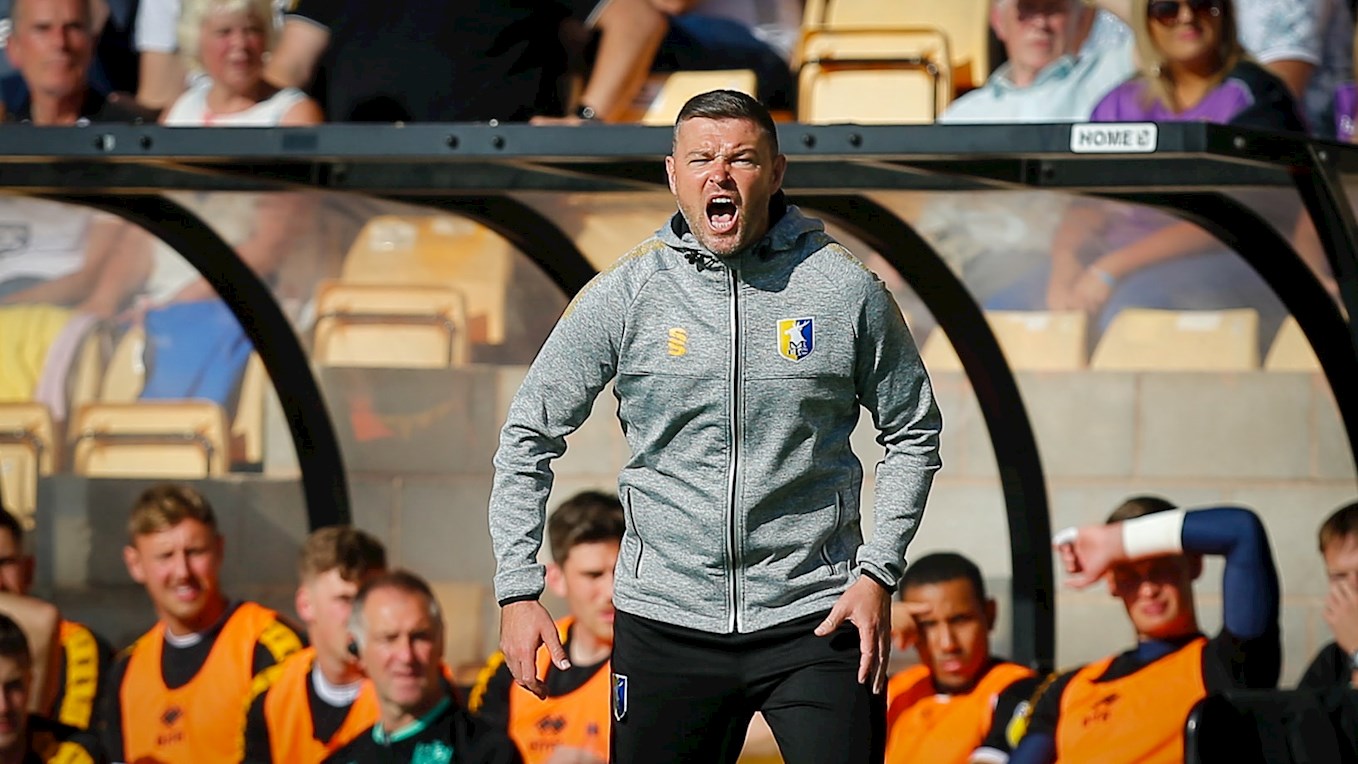 “The Hereford game [in 2013] is something that I’ll take to my grave. That feeling of euphoria when Greeny [Matt Green] put the ball in the back of the net. They were brilliant memories.

“When I first came to the club I spoke about making memories, and being honest, the first ten games haven’t been good enough. But I feel confident and positive and have faith that we have turned a corner.

“We have some real supporters that maybe don’t believe at this moment in time, but they’re willing me to do well.”

Looking ahead to Mansfield’s next match against Plymouth at One Call Stadium this Saturday, the boss added: “Plymouth were very unlucky in their last game against Cheltenham. They hit the woodwork a few times and created a lot of chances.

“They are a team that will climb the league there is no doubt about that. Ryan Lowe is a very talented young manager – what he produced last season was an incredible achievement.

“The players they [Plymouth] have recruited, they have some very good players. They are a big football club that are very well supported.

“With his [Ryan Lowe’s] ability as a manager, there is no doubt about it, they will climb the league table.”

John Dempster also provided an injury update, revealing that goalkeeper Bobby Olejnik (below), who has been sidelined since last year with an ACL injury, is in contention to start against the Pilgrims.

“Bobby Olejnik came through a practice game on the top pitch yesterday and will be in contention for Saturday [against Plymouth]. 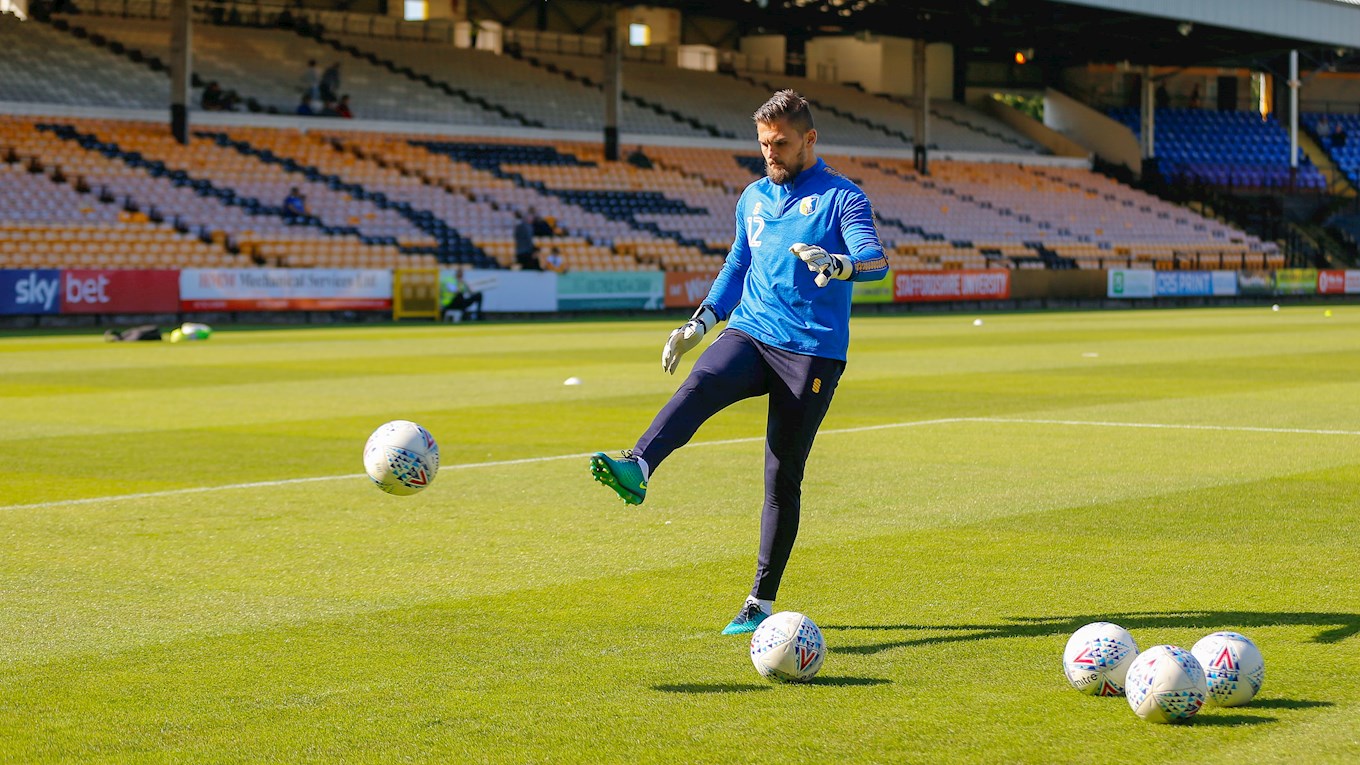 “Bobby has been the ultimate pro’ throughout his injury and that’s why he’s progressed quickly over time. For him to come through that practice game on Monday was great to see.

“Nicky Maynard will train on Thursday or Friday. Davo [Craig Davies] is probably three weeks away [from returning to training].

“When a player is injured for that length of time it can be really psychologically draining. It can be tough for a player that has been out for that long and he can’t wait to be back in and around the lads.”

To purchase tickets for this weekend's home match against Plymouth Argyle, head to stagstickets.co.uk.