Stags’ boss John Dempster says that there are ‘similarities’ between the back-to-back promotion-winning Crawley Town side he was a part of and the current Mansfield Town squad, ahead of Saturday’s clash between the Red Devils and the amber and blue.

The former defender featured in both of Crawley’s promotion-winning campaigns, from the Conference in 2010/11 and League Two in 2011/12.

He says the ‘ingredients’ and ‘team spirit’ of the Red Devils’ squads for their two highly successful campaigns can be seen in the current Mansfield ranks.

“I wasn’t there [Crawley] for a great length of time, but the time I had there I really enjoyed. They were really happy times,” he said in Tuesday morning’s news conference.

“We had an incredible team spirit and some brilliant characters. I look at this current [Mansfield] campaign and there are some similarities and ingredients that we have in our squad.

“I look back [on Crawley] with fond memories but also recognise that there are some similarities to this campaign.

“We had good centre forwards and I think we’ve got that in our [Stags’] squad. We had a team of good footballers that could mix it as well.

“That team spirit is key and you get that from being together on a daily basis. We’re all together trying to achieve a common goal and those are the similarities that I recognise.

“Crawley are [now] a very mobile team and the loan signings that they’ve made have improved them no end. We’ll have to be on our mettle there to bring the points home.

“If we can train this week with the intensity that we had last week, that will only make the game easier. We’ll be looking for another positive performance.”

John Dempster provided an update on the Stags’ current injury list, while also speaking in detail about Tuesday’s behind-closed-doors reserve game against West Brom, in which goalkeeper Bobby Olejnik and striker Andy Cook will feature.

“We’re expecting Hayden White to join in the training session today [Tuesday] and we’re expecting Dapo [Afolayan] to play a part in the session also,” he added. “They’ll both become more heavily involved as the week develops.

“Davo [Craig Davies] is still with the medical team along with Jordan Graham. Bobby [Olejnik] will play 45 minutes for the reserves [against West Brom in a behind-closed-doors game] today and we’ll see how Cooky [Andy Cook] gets on in that game as well.

“It will be excellent to see and it’s excellent news for the football club. Cooky and Omari [Sterling-James] will be playing up top together [in the game]. We had Otis [Khan] down to play in the game as well but he has some sickness.

“Alistair Smith and Will Tomlinson will play in midfield and we have a young back three of Jamie Chisholm, Lewis Gibbens and Aiden Walker.

“We want to get minutes into the legs of the more senior boys who have been out for a period of time and further develop younger players against decent opposition.

“The reserve games will be used to top up minutes throughout the season. They will act as valuable game time for all players, whether we’re going to get further development into them or game time.”

The manager added that the return of injured players will increase ‘healthy competition,’ something he believes is vital to a successful season.

“We want healthy competition. When I pick the 18 I expect every individual to be fighting for their place and fighting for points. We got that on Saturday.

“I don’t think we’ve moaned too much about our injury crisis. One of the positives of that is that we’ve had more debuts from young players this season than in recent years.

“We want to have a successful campaign and if we want that then we need strength in depth. With the boys coming back [from injury] we certainly have that.

“When you have the likes of Neal Bishop coming back into training, it lifts the whole group. It makes a real difference to the intensity of the session when you have those characters in and around it.

“Any win brings confidence and it’s good to score two goals [against Scunthorpe]. I was really pleased for Matt Preston to get on the scoresheet, it’s important that the defenders chip in with goals.

“It was also great to see Danny Rose score an opportunist goal – some of his goals this season has been outstanding and that one was more about playing on a mistake. 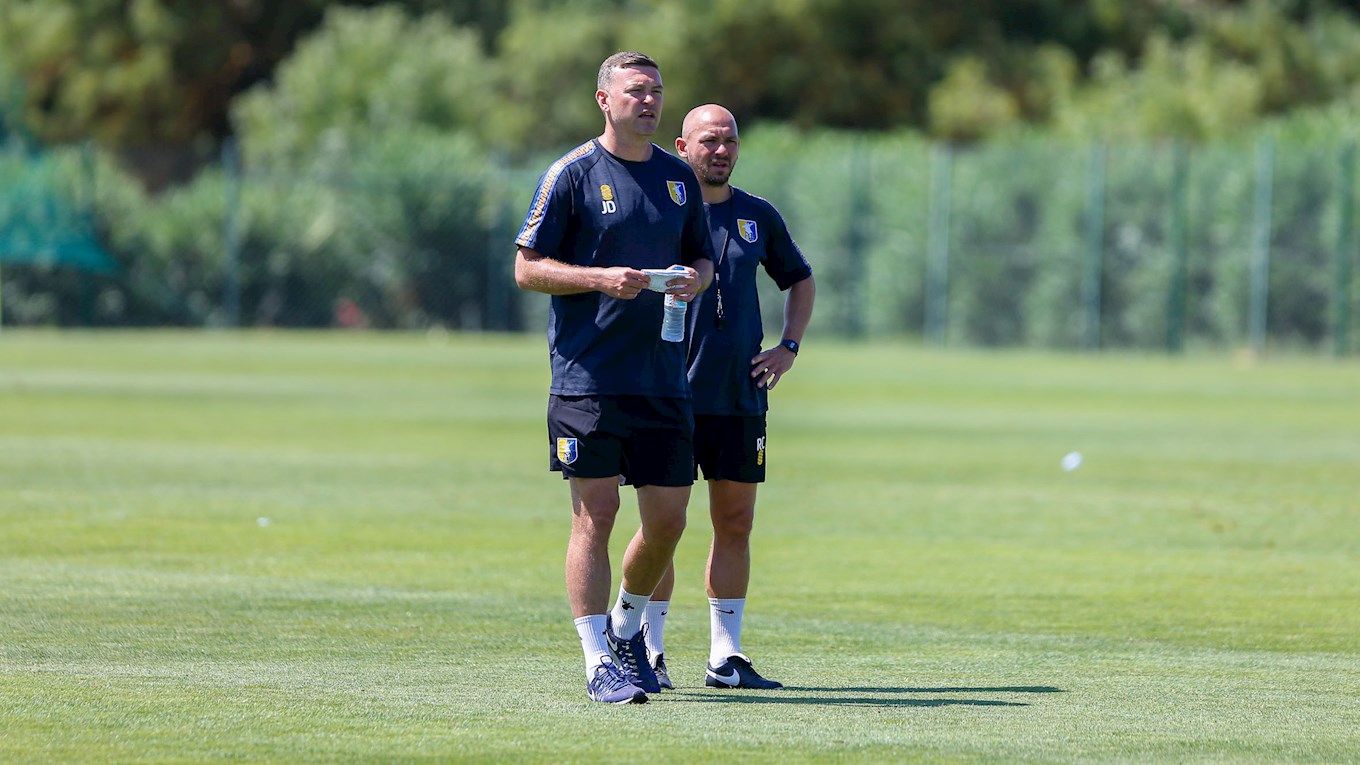 “The goals he’s scored this season have all been of a different type and impressive in their own right. He deserves all the credit as he’s been on it since the first day of pre-season.”

After Conor Shaughnessy was voted as the supporters’ man of the match after Saturday’s 2-0 win over Scunthorpe, the boss commended the on-loan midfielder’s display and the qualities that he brings to the squad.

“Conor [Shaughnessy] brings flexibility because he can sit in front of the back-three or four. He can play at centre-half as well and is good on the ball.

“He’s also a physical presence – you look at our second goal on Saturday, because of his size and height, he was able to head the ball back into a good area. 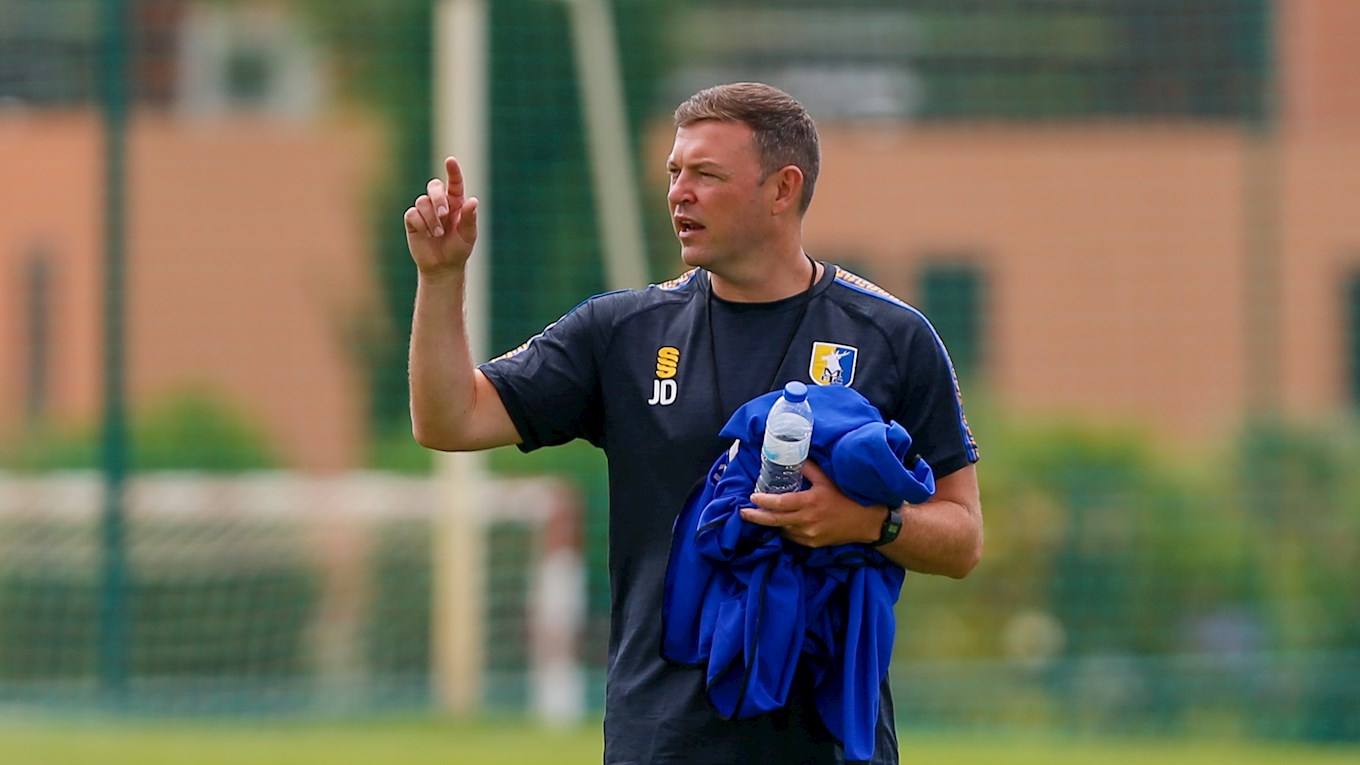 “Conor brings strength and depth and good defensive cover, but he’s also good on the ball. He brings a lot to the table.”

The manager also spoke of former Bury midfielder Stephen Dawson, revealing that the current free agent recently trained with the Stags. The boss says that Mansfield will not be pursuing a deal for the 33-year-old.

“Daws [Stephen Dawson] came in last week. He has a really infectious personality and you can see why he’s been in the game for the length that he has.

“We won’t be following the deal any further – he’ll be training with a different football club from today.

“He is an excellent character and someone who really impressed us. But with the injuries that we’ve got coming back [in midfield], we feel that we have strength in depth there in that position.”