Stags’ boss John Dempster has dedicated this afternoon’s convincing 2-0 victory over Scunthorpe United to the supporters, the club’s owners and its board of directors.

A goal in either half from Matt Preston and Danny Rose without reply earned the amber and blue their first home victory of the season in front of a 4,772-strong crowd.

The manager says that the win was a ‘real team effort’ and that his charges ‘worked their socks off’ at One Call Stadium.

“I think we dominated. I’m really pleased with how the boys managed the game in the last ten minutes.

“We were comfortable. That win was for the supporters. In that, I include the chairman [John Radford], Carolyn and the board of directors because they bleed amber and blue. 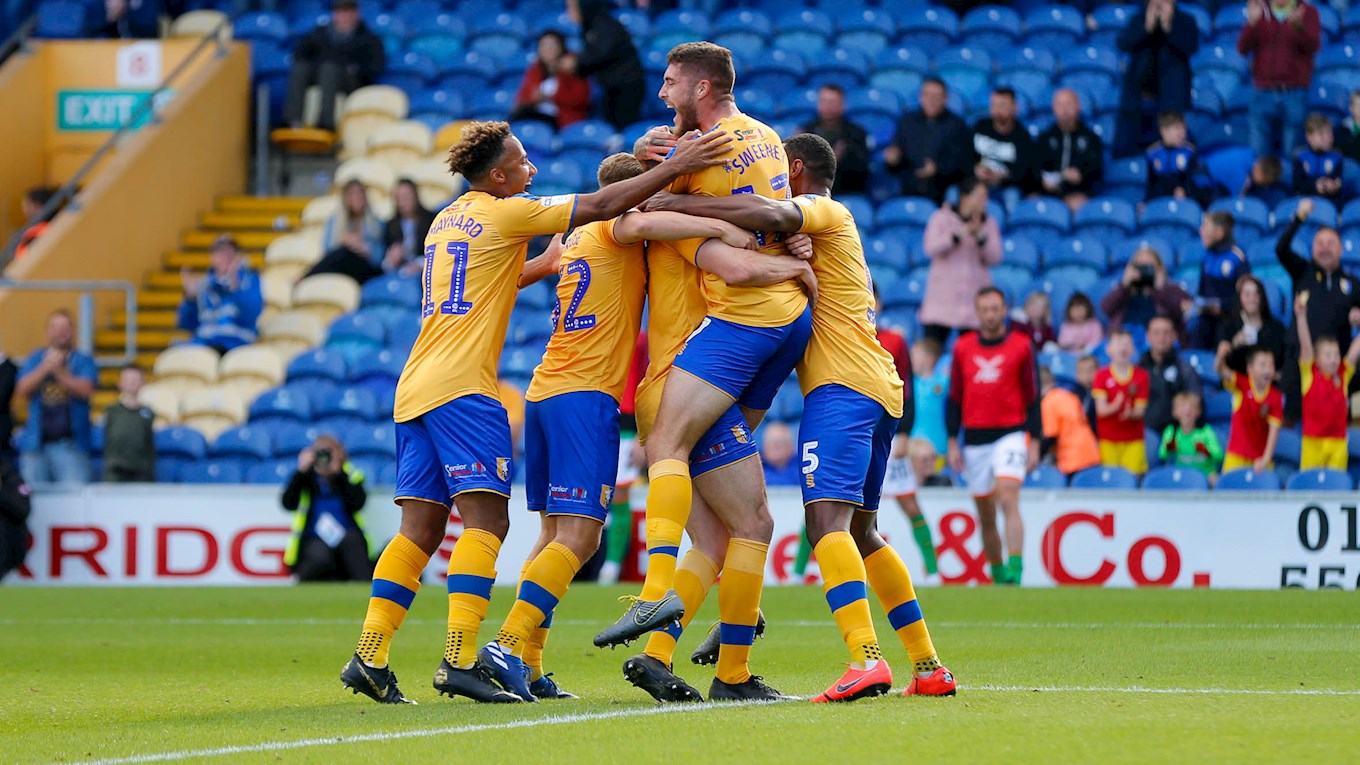 “Training this week has been outstanding in terms of tempo and application and it goes into the game, we’ve seen that today.

“I thought Conor [Shaughnessy] was a massive plus in midfield. He won his headers and also played some lovely passes to our wing-backs.

“I thought Matty Preston (below, left) was outstanding – possibly the pick of the back-three – but I thought the back-three and the goalkeeper [Conrad Logan] were very good today with the clean sheet. 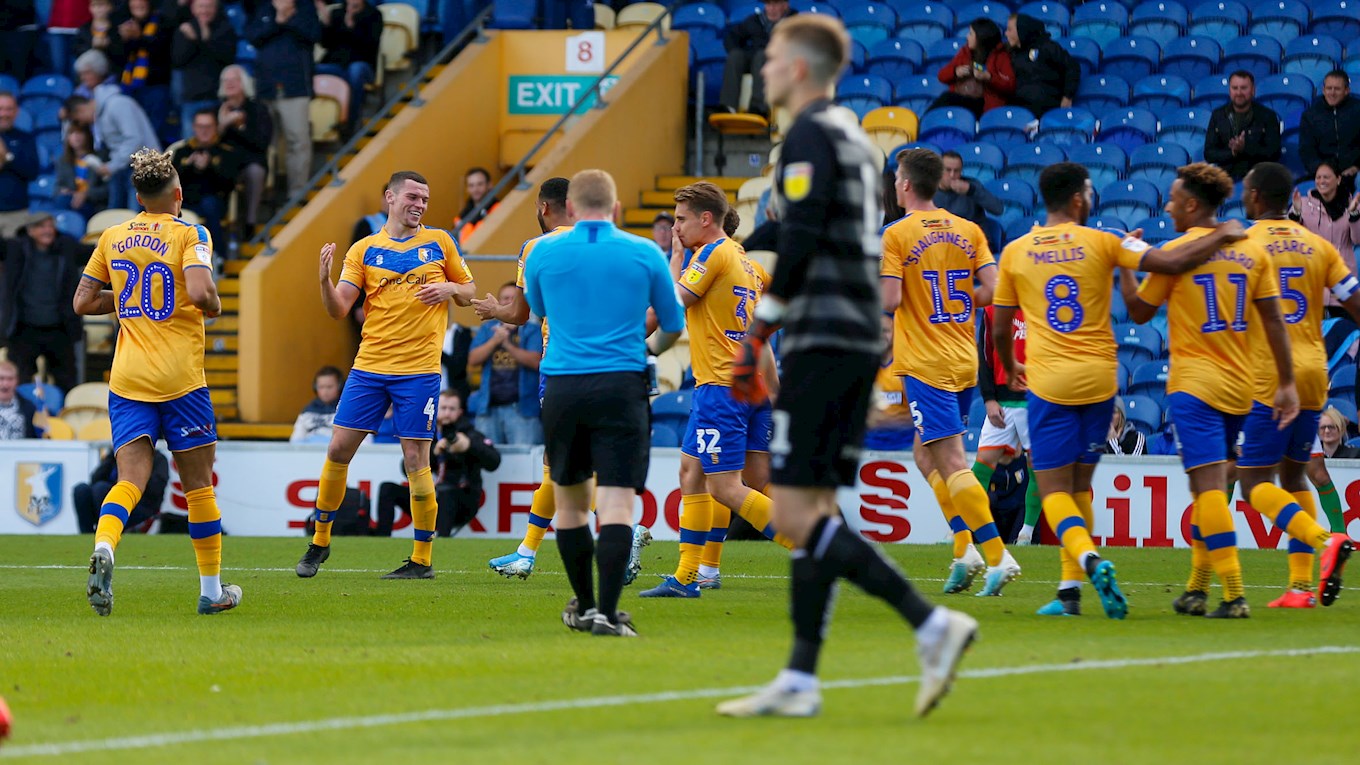 “Every player worked their socks off today. It was a real team effort. It was important that we saw the game out.

“We haven’t played many games yet, there’s a long way to go. Make no mistake, Scunthorpe will climb the league table with the manager they’ve got.

“They have some very good players for this level so they’ll start taking points off people. We were strong and resolute, which is why they didn’t take any points from us today.

Following the Stags’ third clean sheet in the league this term, the boss paid credit to the Stags’ defensive work, while also praising centre-back Preston after he opened the scoring this afternoon.

“I think KP [Krystian Pearce], Matty Preston and Sweens [Ryan Sweeney] have got a little [scoring] competition going now. We were joking before the game how KP is two up.

“Matty has got one back on him today, so Ryan Sweeney (below) needs to join the party with the goals! 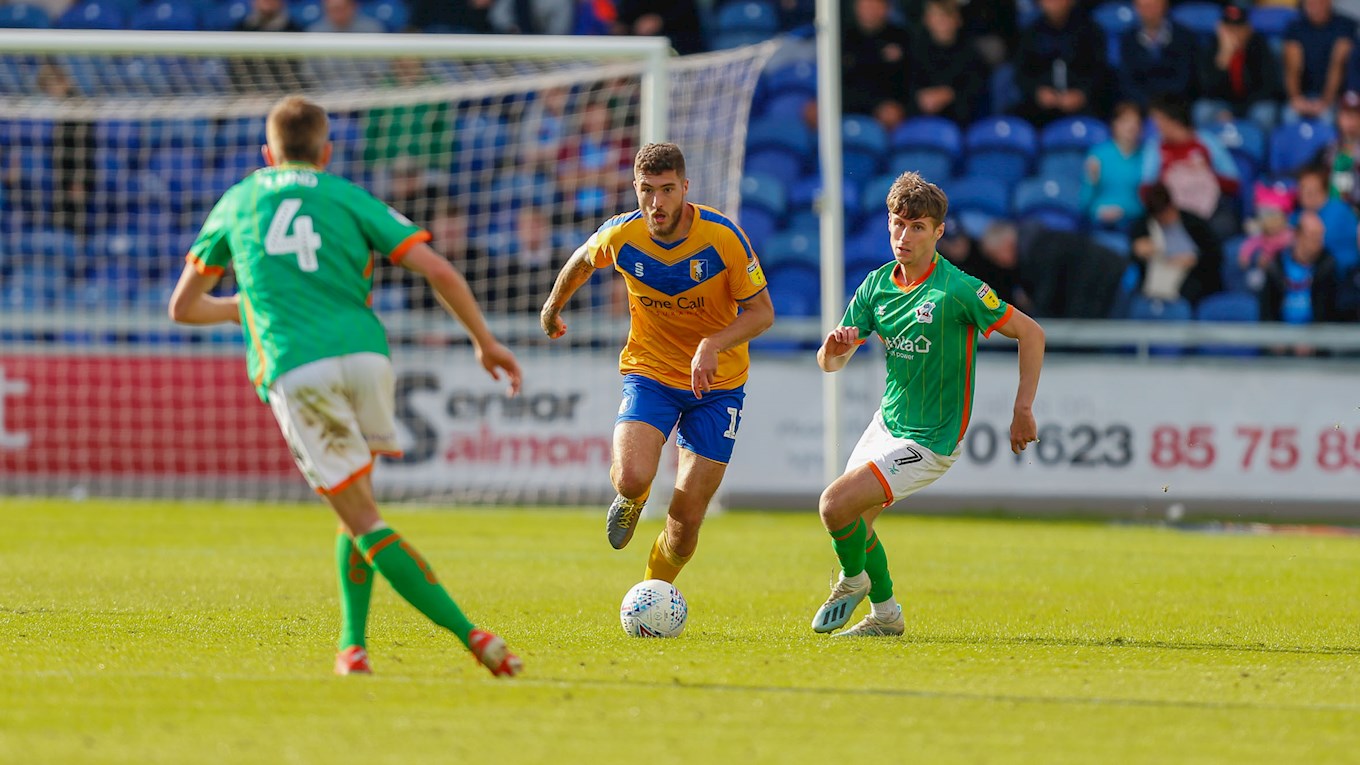 “It’s good to see a little bit of competition there. All three of them were really good today and the reward of that is a clean sheet.

“All over the pitch we dominated and we were worthy winners.”

The duo of Dapo Afolayan and Hayden White were missing through injury for today’s game, and John Dempster described the reasons for their absences post-match.

“I think Dapo [Afolayan] will be training on Monday. You look at our bench today and it was very strong. He had a bit of a niggle in his knee so there was no need to risk him.

“When you look at the injured players we’ve got coming back and the additions that we had today, it’s looking strong. Competition for places is healthy and that’s what we need.

“Hayden [White] is still very sore on the site where he broke his leg. The pain is slowly going away but it seems like a slow process.

“Again, I expect him to be training again next week.”