Despite a strong performance at One Call Stadium, Stags' under-18s were narrowly beaten 2-1 by visitors Scunthorpe United on Saturday.

Ryan Ingram had opened the scoring for Mansfield on the half-hour mark after a dominant first half display.

With the final quarter of the game approaching, the Stags looked on course to take all three points, but they were hit by a late sucker punch as Scunthorpe scored twice in the latter stages to secure victory.

The first chance of the game fell to the visitors after two minutes. After a mazy run, Harry Hessop fed Levi Gallimore and the striker swivelled on the edge of the box, firing low at Maison Campbell. The ‘keeper was equal to it though, getting down well to palm the ball away to safety.

After seven minutes, Ethan Hill nipped in at the vital time to deny Raynner Smith, after a searching cross from Fin Shrimpton. From the resulting corner, Hessop saw his goal-bound effort tipped over the bar by Campbell.

The Mansfield 'keeper was called into action again moments later, a short corner found Harry Baker who hooked the ball towards goal, but the Stags’ stopper was there to deny the Iron the opening goal.

Shamar Lawson had the first opportunity for the amber and blue on 12 minutes. Arun Jones played him in with a well-placed pass and Lawson cut-inside but saw his shot blocked by Charlie Barks.

Kyle Tomlin then met Lawson’s corner with a powerful header, which he could only direct over the bar.

Barks saved his team once more on 18 minutes, as he got in the way of Hill’s rasping volley, as the Stags began to turn the screw.

Mansfield should have taken the lead on 20 minutes when Josh Scott slipped in his striker-partner Ingram. Unfortunately, the forward was denied by a fantastic save from Josh Chapman.

Chapman then made an even better stop on 21 minutes. Scott found himself with time and space from 25 yards and the Iron-stopper somehow managed to turn the striker’s dipping effort over the bar.

The Stags were dominant and only some more last ditch defending denied them the opener. Lawson floated a cross to Scott who had peeled away from his marker but saw his firm header saved by Chapman.

From the rebound, Ingram was denied by a timely intervention from Oliver Kemp, who intercepted the ball and scrambled it to safety.

The pressure finally told, as Mansfield took the lead on the half-hour mark. From Lawson’s corner, Scott and Ingram combined to devastating effect. Scott unselfishly headed the ball back across the box for Ingram who converted from close-range.

Scott was desperately unlucky not to score just before half-time. This time, Ingram turned provider, finding Scott with a good cross, but the forward saw his effort cannon back off the post.

Mansfield continued the second half on the front foot and Lawson went close to doubling the home side’s lead after 49 minutes. Ingram powered away from Oliver Lobley and crossed low for Lawson, who saw his low drive saved.

Scunthorpe responded through Levi Gallimore who forced Campbell into action with his cross-cum-shot moments later.

Ingram had a golden opportunity to double his tally on 64 minutes. After Scott had played him in, he rounded Chapman but from a tight angle could only find the side-netting.

The Iron equalised against the run of play on 73 minutes, when Raynner Smith found Joey Dawson in space and the midfielder planted his header past Campbell.

Shortly after, Dawson teed up Gallimore with a low ball across the box, but the striker fired wide.

The Stags then went close through Lawson, but Chapman was equal to his curling effort on 81 minutes, with both teams now searching for the winner.

It was Scunthorpe who found it with seven minutes to go, with a counter-attack from a Mansfield corner. Gallimore race away down the right-wing and found Shrimpton who beat Campbell with a low finish.

Campbell then kept his side in the contest with a fine save from Hessop’s powerful strike after a good passing move.

The amber and blue had one final chance to snatch a deserved equaliser right at the death. From Lawson’s corner the ball fell to Scott, but his powerful drive hit the side-netting.

The referee ended the game shortly after and despite a strong performance, the Stags’ were beaten at One Call Stadium. 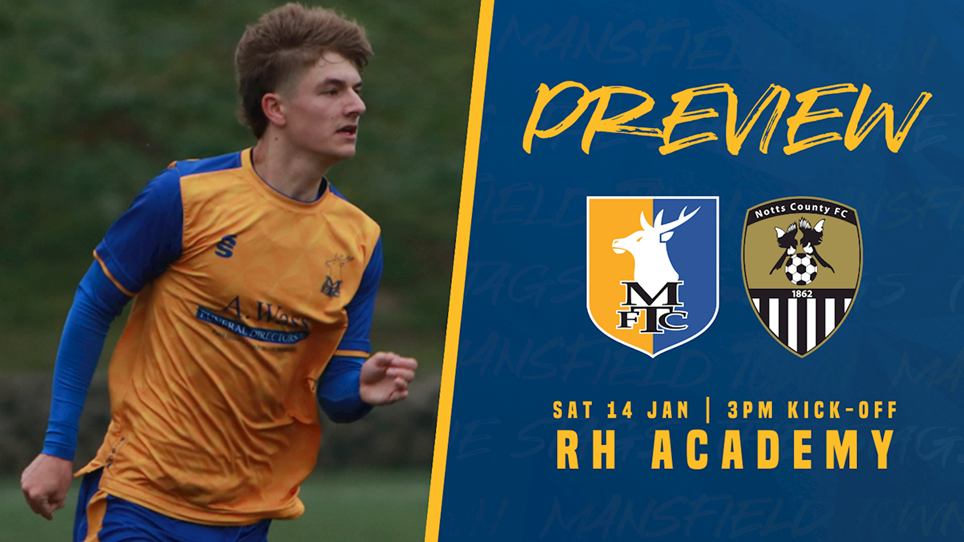 
Mansfield Town were held to a 1-1 draw as a goal in either half saw them share the points with Crewe at One Call Stadium.


Mansfield’s under-19s were made to rue missed chances as a first-half strike from winger Ollie Nicholson sealed a 1-0 win for Harrogate Town in the Youth Alliance League on Saturday afternoon.