Mansfield Town under-18s progressed to the second round of the FA Youth Cup after a thrilling 4-3 victory over Doncaster Rovers at One Call Stadium.

Rio Molyneaux and Jimmy Knowles both helped themselves to a brace, as the Stags came from behind to win 4-3.

The amber and blue survived a late scare as Maison Campbell was shown a red card after an off-the-ball incident three minutes from time.

The visitors started brightly and took the lead six minutes into the contest. After some good work by Jack Watson on the edge of the box, the ball fell kindly to Junior Smith. The Stags’ appeals for offside were waved away by the referee, as Smith’s deflected strike found the bottom corner.

The hosts responded straight from kick-off, when Knowles played a sensational pass out wide to Molyneaux who crossed low. The ball eventually found the advancing Knowles on the edge of the box who unleashed a powerful low drive which whistled past the post.

There was a let-off for the Stags on 14 minutes, as Watson beat the offside trap to latch onto Nathan Dimou’s long pass. From a tight angle though, the striker could only slice his effort wide.

Shamar Lawson was desperately unlucky not to equalise on 24 minutes, after his stunning curling effort cannoned off the crossbar and bounced on the goal-line before Rovers scrambled the ball to safety.

At the other end, Watson was causing no end of problems for the visitors. Hasani intercepted a loose pass from Jordan Armsden and fed the striker who fired over from 20 yards.

Rovers created another opportunity through Will McGowan on the half-hour mark. Elliott Walker’s sharp thinking from a throw-in sent the midfielder free, but he lifted the ball over after spinning his marker.

The Stags found their equalising goal on 39 minutes through Knowles. The ball broke to the forward on the edge of the box once more and this time he made no mistake, drilling low past Ben Bottomley in the Doncaster goal.

Rovers started the second period as they did the first and forced Maison Campbell into a save on 46 minutes. Watson and Smith combined, with the latter firing straight at the ‘keeper from 12 yards.

Moments later, Kian Sketchley made a timely intervention to deny Marius Conradi an opening from Watson’s cross. From McGowan’s corner, Campbell made an outstanding save as he palmed away Dimou’s powerful header.

Despite Rovers’ strong start to the half, it was the amber and blue who took the lead as Molyneaux latched onto an inviting cross from the left-hand side to leave Bottomley with no chance on 56 minutes.

Joshua Scott looked to add to the lead soon after, as he brought the ball down wonderfully from a high clearance and forced the ‘keeper into a save.

Mansfield were pegged back on 64 minutes as Junior Smith scored his second of the game. Hasani found Walker on the right and he played a low cut-back which the striker fired home emphatically.

Both teams went in search of the crucial fifth goal and it was the home side who found it on 76 minutes. Ethan Hill skipped past a Rovers defender before playing a defence-splitting pass to Ben Bayliss on the right.

The full-back found Knowles with space in the area and the forward buried the chance to put the amber and blue in the driving seat once again.

Knowles went searching for his hat-trick and very nearly had it three minutes later as he burst into the area, but could only find the side-netting with his effort.

On 82 minutes, Molyneaux wrapped up the game with the best goal of the night. The winger cut inside on the right and chipped the ball over Bottomley from 25 yards.

Rovers had a lifeline three minutes from time. After a goalmouth scramble, the ball fell kindly to McGowan who finished calmly to give his side hope.

In the aftermath, Campbell was sent off for an off-the-ball altercation, to set up a nervy six minutes of stoppage time.

With their numerical advantage, the visitors went searching for the goal that would keep them in the competition and thought they’d found it in the second minute of added time when substitute Owan Derrett sliced a chance wide.

The visitors threw everything at the Stags in the dying embers of the game but the amber and blue held on to book their place in the next round.


Apply for a trial with Stags' Education Programme, offered through West Nottinghamshire College. 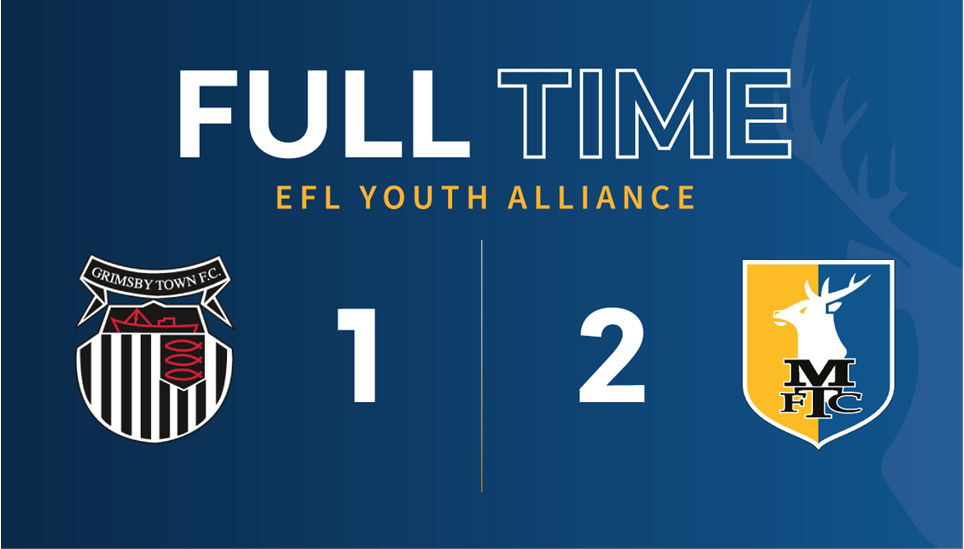 
Mansfield Town earned a point and clean sheet away at Exeter City on Bank Holiday Monday.


A goal in each half saw Mansfield Town fall to defeat against in-form Leyton Orient on Friday afternoon.