Despite feeling ‘disappointed’ that the Stags could not find a winning goal in tonight’s Leasing.com Trophy match against Crewe, assistant manager Lee Glover was delighted with the performance of young striker Jimmy Knowles, who scored his maiden goal in Mansfield colours in the first-half.

The 17-year-old striker fired home a powerful effort to open the scoring in the opening period of the game, which was eventually lost by the Stags via a penalty shootout.

Mansfield’s assistant boss says that there was a ‘lot of good play’ from the amber and blue this evening, but quality lacked in the final third.

“After the first 20 minutes I thought we were in the ascendancy. We had a lot of good play, but there were areas – particularly in the final third – where we could’ve shown a bit more quality.

“The fans that turned up tonight will have appreciated the effort and the intensity in our game. But we’re disappointed that we didn’t get the winning goal.

“Jimmy [Knowles] got a great goal to start with for a young lad starting his career. It was a great finish and we were then looking for the second.

“There was then a freak goal [for Crewe] which we didn’t have a great view of. We spoke then at half-time of going back out on the front foot and putting a marker down on them.

“It’s great [for Knowles, pictured below, to score first goal]. He’ll be absolutely delighted tonight and rightly so – I thought his performance was great for a young lad. 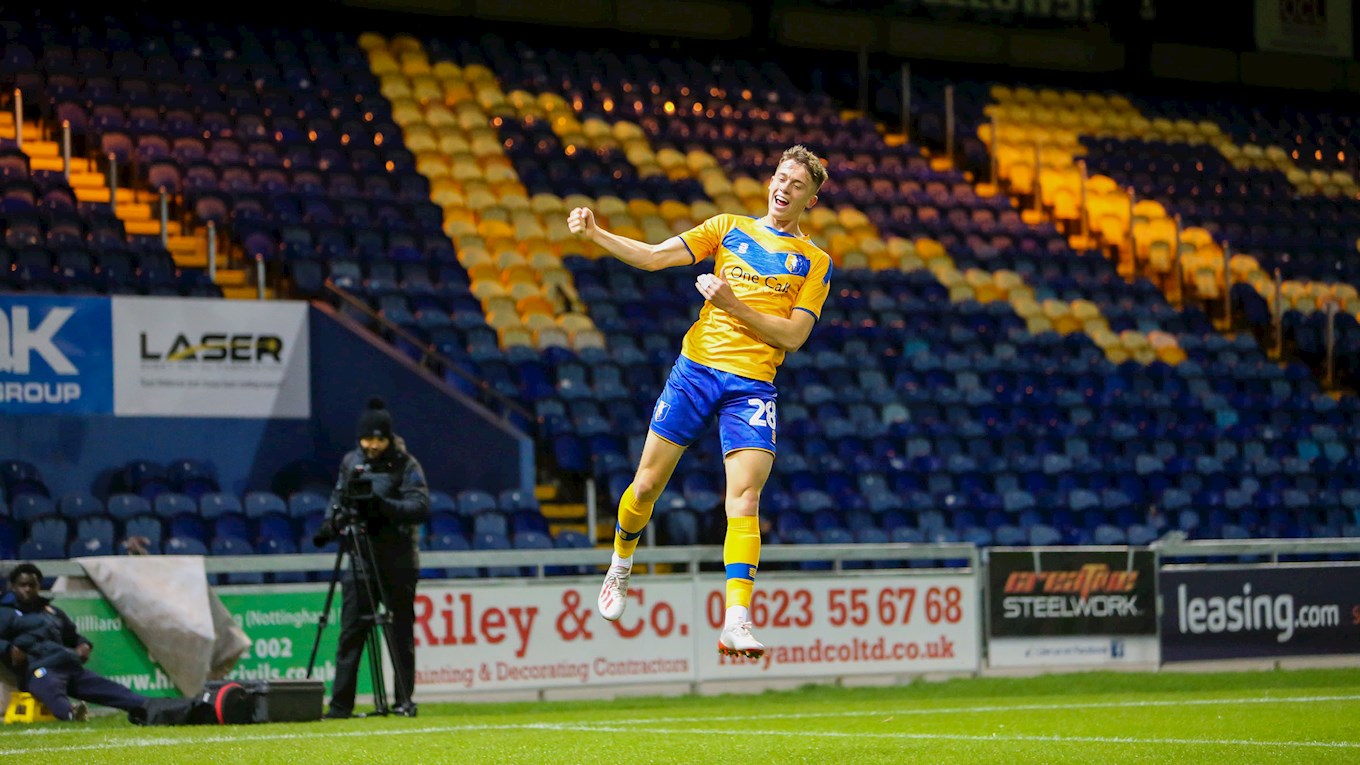 “We know there are areas he needs to work on, but the lad wants to learn. He wants to listen and work and it was a great strike he got. He’s really happy at the moment with his goal.”

Speaking more about the match overall, he added: “At Grimsby, when it became backs to the wall, we still played our football. Tonight, we were saying to them, as good as Crewe are, why don’t we go out and play a bit against them.

“When we did that, we were really happy. We were happy with the performance level that was there.

“[We needed] an extra bit of quality in the final third at times, but we did have some good openings.

“We created chances, but we just didn’t get that last little bit. We lost on penalties again which is the frustrating thing as, we practise penalties all of the time.

“That aside, we thought the performance was quite good. Dapo [Afolayan], CJ [Hamilton], Jimmy [Knowles] and Cooky [Andy Cook] looked a threat. There were a lot of positives during the actual game.”

For the first time since December 2018 – due to an ACL injury, and more recently, a dislocated finger – goalkeeper Bobby Olejnik (below) appeared between the posts for the Stags this evening.

Speaking of the shot-stopper’s return, Lee Glover said: “Everyone in the building is happy for Bobby [Olejnik] to be back. When you’ve had a long term injury, you want to get back on the pitch.

“He’s come back and has been great around the place, so it’s nice to see him in the shirt and out on the pitch.” 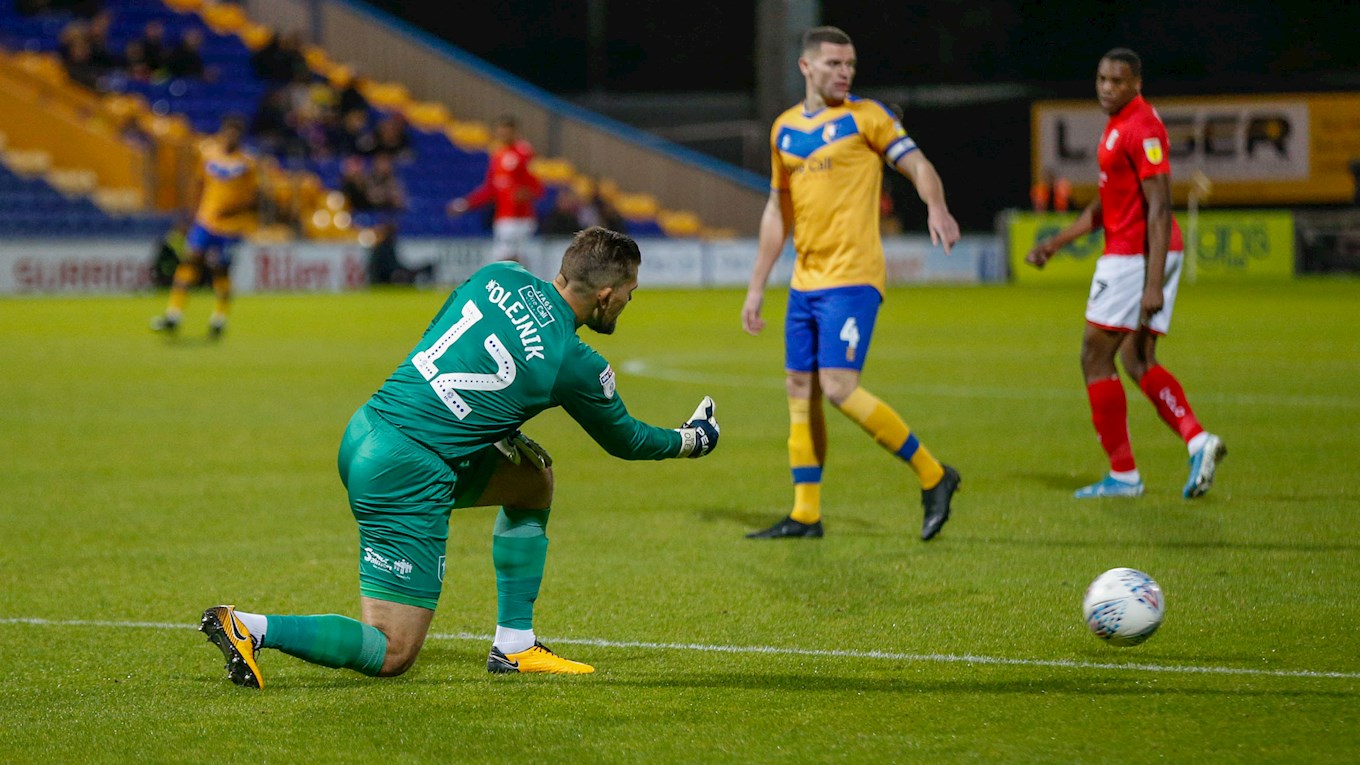 Centre-back Matt Preston also returned to the side, as despite currently being suspended for league matters due to a recent red card against Cambridge, the defender is eligible to feature in Leasing.com Trophy clashes.

“He [Preston] came back in and we thought he did really well tonight. He got the armband and was given the leadership there.

“He came back in and did well. We’ve made sure that while he’s been out [suspended], he’s been training.

“We’ve kept him involved in everything and hopefully he’ll be back fighting for his place soon.”

Lee Glover also gave an update on midfielder Jacob Mellis, who came on as a substitute in the second-half before going on to be replaced by wing-back Mal Benning.

“His [Mellis’] hamstring tightened up and you have to be careful with that, because when it tightens up it gives you a reminder that there’s something not right.

“If that goes, it’s obviously a month out. But when he came on, he played some lovely passes and got us playing in the final third.

“So it had to be a precaution. We didn’t want to bring him off and he didn’t want to come off. But the physio told us that he’d felt it a couple of times and we’re in danger of losing him for a period of time, which we don’t want.”