Stags’ boss John Dempster says that his side’s ‘excellent’ performance against Walsall was ‘matched’ by the superb backing of 877 travelling supporters this afternoon.

Mansfield recorded their third victory of the month with strikes from frontman Andy Cook and midfielder Alex MacDonald in either half.

The boss says that if performances continue in this manner, the Stags will begin to climb into the higher positions of Sky Bet League Two.

“I would like to start by talking about the support we had today,” he began. “It’s a joy to be a part of. We went to Carlisle and won, we went to Grimsby and won, and we’ve come to Walsall – who were in League One last season – and won.

“There is a definite change in energy, probably since the Cambridge game. We hit rock bottom and we’re bouncing slowly up the table.

“There are things that go for you in a game – Conrad [Logan] makes an excellent save and we go up the other end and make it 2-1. 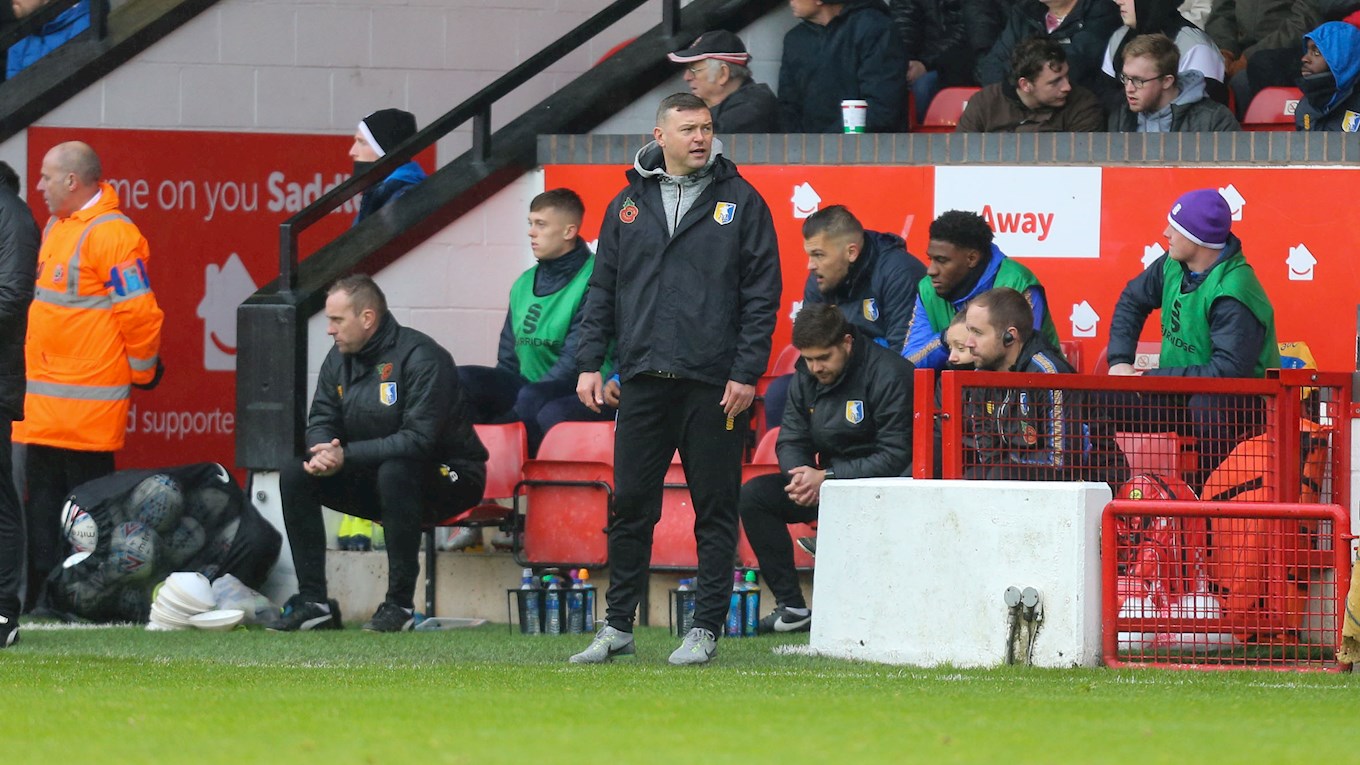 “But I thought the players were excellent today and that was matched by the supporters.

“It’s a win away from home and we want to back these wins up at home. We performed well and I think over a period of time, the teams above us will start looking over their shoulders.

“I’m getting a little more used to the job – I’m trying to not be on such a high when we win and as low when we lose. That comes with experience, and although we’ll enjoy tonight, our focus will be on Colchester next week.”

The boss also discussed both of his side’s goals, praising the trio of Cook, MacDonald and attacking midfielder Otis Khan.

“I thought Otis was unplayable today, running down the left wing and cutting inside. It was a magnificent ball [for his assist] and it was bread and butter for Cooky [Andy Cook, below]. 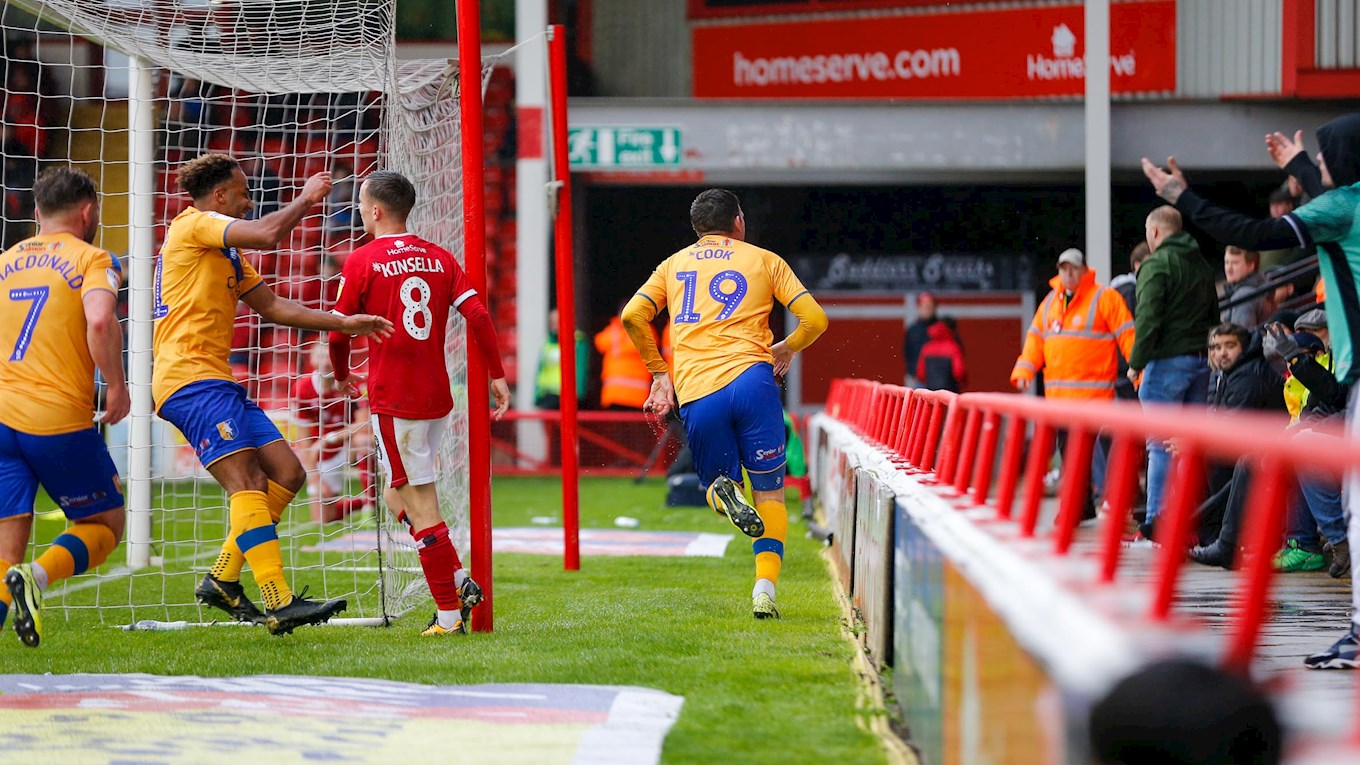 “I was pleased with Cooky today too as when you return to your former club, it can be difficult. I thought he handled himself well and I’m sure he enjoyed it when he scored.

“He got a little bit of stick but the best way to answer critics is by scoring goals and winning football matches. That’s what the team has done today.

“I think that’s the first goal Macca has scored! He doesn’t score many but what he does bring is energy and enthusiasm. 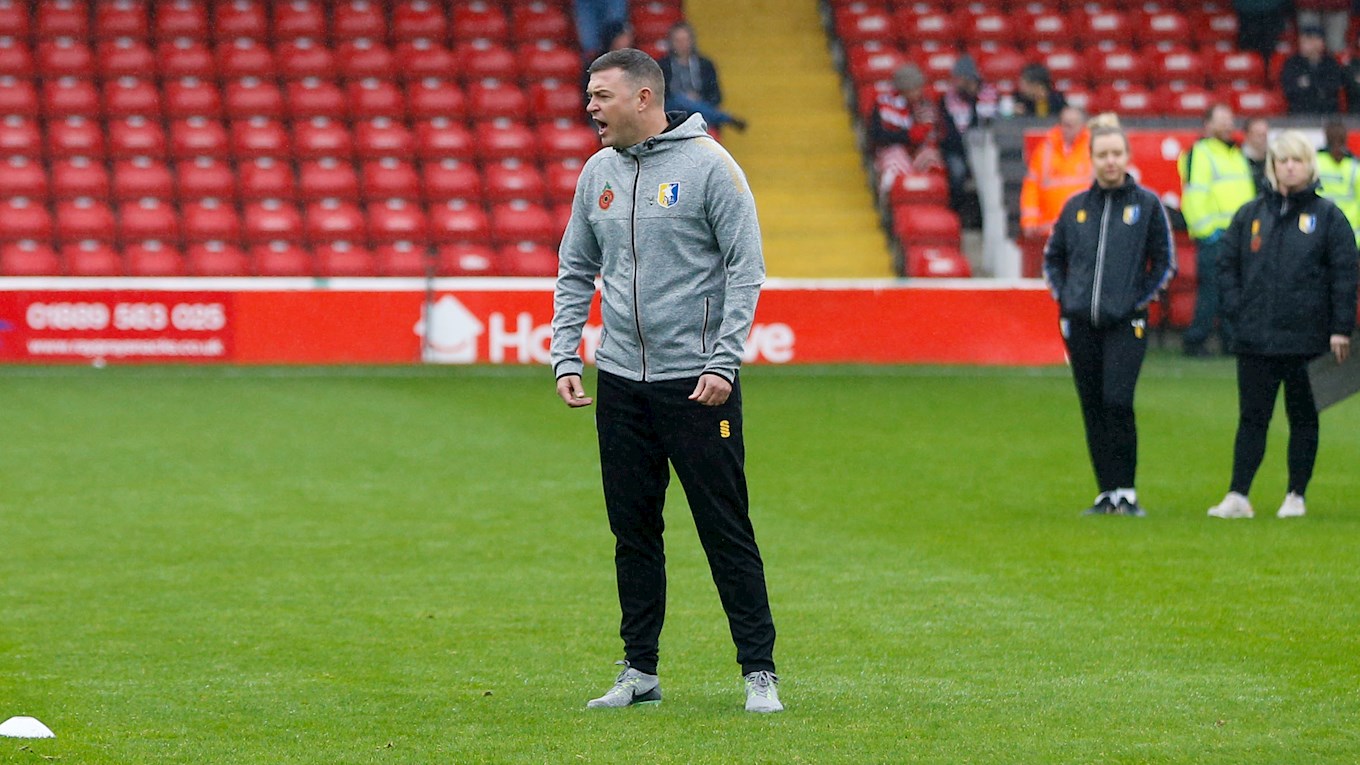 Another standout performer for the Stags was goalkeeper Conrad Logan, who made a number of vital saves at Banks’s Stadium.

The boss added: “I thought his [Logan’s] distribution was excellent today – it has been for the last few games. He’s another big character in the dressing room and another winner.

“To see him pull off the saves he made was magnificent.”

Captain Krystian Pearce was substituted early in the second period, with what the manager has confirmed as a groin problem.

“There was a slight pop in his [Pearce’s] groin and you could see he was holding it when he was running. We took him off and we’ll assess him over the weekend.

“Hopefully it’s not too serious, but I haven’t yet had an update from the medical team since the game has finished.”