It was ‘a fantastic and immensely proud moment’ for chairman John Radford at half-time of last Monday’s clash with Lincoln when, for the first time in his eight-and-a-half year tenure at Mansfield Town, he was able to step onto the One Call Stadium pitch and address supporters as the owner not only of the club, but its ground as well.

When the Stags’ chairman took over back in September 2010, his first job was to get the club itself back on an even keel, falling, as it had, into the bottom half of the Football Conference (now National League) table.

A struggling, seemingly moribund club that had lost more than £1 million in its first two years of playing non-league football, for the first time since the 1930s, was on the brink. It needed a cash injection just to stay afloat, let alone revitalise fortunes on the field.

Radford quickly made it his mission to oversee both outcomes were positively met, quickly galvanising the Stags with £250,000 of investment to stave off administration, financing new signings and appointing Paul Cox as manager, who eventually brought about a Football League return.

In the background, however, led a far deeper-rooted obstacle to ongoing success. Having sold the club after relegation at the end of the 2007-08 season, former owner Keith Haslam had retained ownership of Mansfield’s long-term home, which is also the oldest ground in the world on which League football is played.

The Derbyshire-based businessman set up an arrangement whereby the Stags could continue to play at the ground as tenants, but only if they paid £100,000 a year for the privilege. It was a situation Radford knew had to change in order to secure long-term prosperity and sustainability for Mansfield. 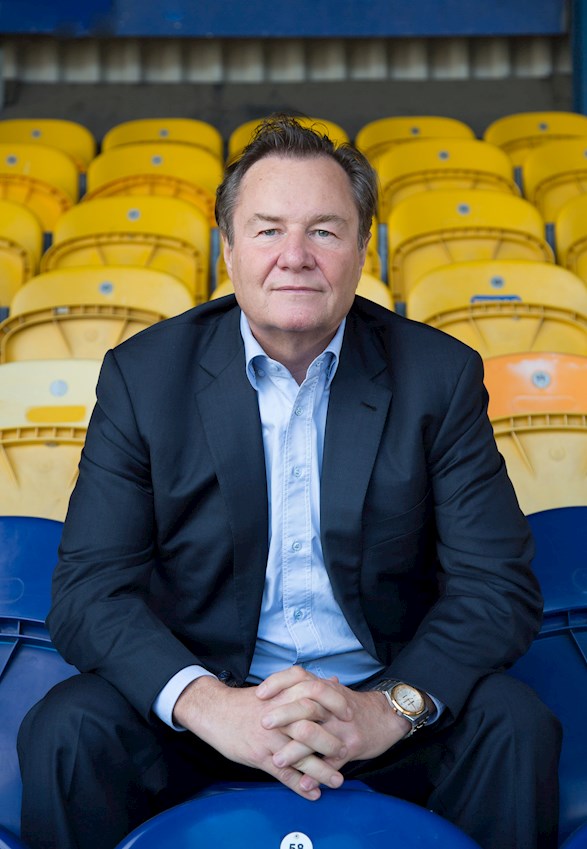 There followed a protracted period of negotiation where any number of outcomes seemed possible – and a court date to find a resolution likely.

Radford began litigation proceedings against Haslam; Haslam locked Radford out of the ground; Radford mulled over the possibility of ground-sharing with Rainworth were the Stags to be promoted. Barely a week went by without some kind of story emerging over the subject.

Eventually, though, the two men agreed an out-of-court settlement in March 2012 whereby Radford would purchase the ground over a seven-year period, paying off the asking price in yearly instalments.

The final cheque in that series was written and handed over earlier this month, meaning that the Stags’ destiny was, for the first time in years, well and truly back in their own hands.

It’s why Radford was left beaming as he took the applause and acclaim of the 7,000-plus crowd during half-time of the 1-1 draw with league leaders Lincoln last week – Mansfield’s biggest gate of the season so far – and was thrilled to address them with a short speech to mark the momentous occasion.

“It’s just amazing to finally have the ground back in our own hands and, in me, it’s owned by someone who is a Mansfield person and a fan of the club,” he reflects. “Standing out there in front of the fans with it finally a reality was an amazing feeling. 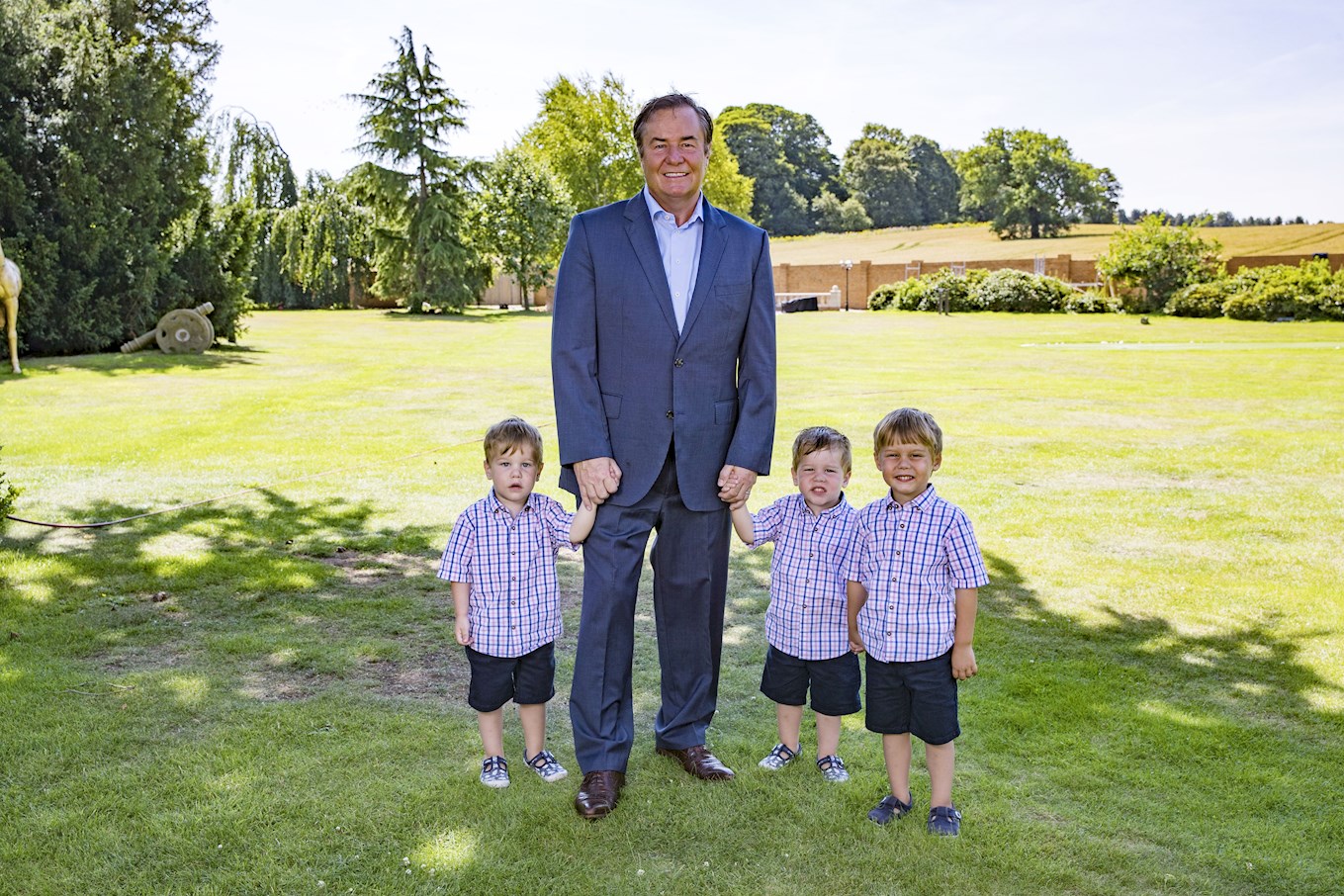 “It should never have got to the stage where the ground was separated from the club and its fans as it was, but now we can make it into somewhere to be proud of and an environment where we can win lots of football matches.

“Our fans are wonderful, as was their response when I was out there with my fellow directors. To hear them singing ‘there’s only one John Radford’ is quite humbling, but also really appreciated.

“They are memories that will stay with me forever and I have the utmost respect for the way a lot of them have stuck with the club through thick and thin.”

The most obvious question now, is what happens next? Radford’s answer is simple – keep the momentum going.

With the Stags fourth in League Two ahead of this weekend’s trip to Exeter, keeping the players focused on the task in hand of a top three finish is the primary concern. Any off-the-field ambitions will follow in due course.

Radford adds: “We have ambitions to develop the Bishop Street Stand at the appropriate time and obviously there are the hotel plans too, although we’re just waiting to see what happens with Brexit before we proceed with that. We can also improve the car parking and other things around the ground.

“These are things we can do over the next few years now it feels more like home. When you are renting a property, you are less likely to do work on it than if you own it – and that is a good analogy here.

“The bottom line is that the ground is not going to be sold to Tescos. We will work something out with the club so it will never be in the situation where the ground is taken away again.

“At the moment though, the concentration is on promotion and I’m sure that we can do it automatically, because no-one really wants to go into the play-offs.” 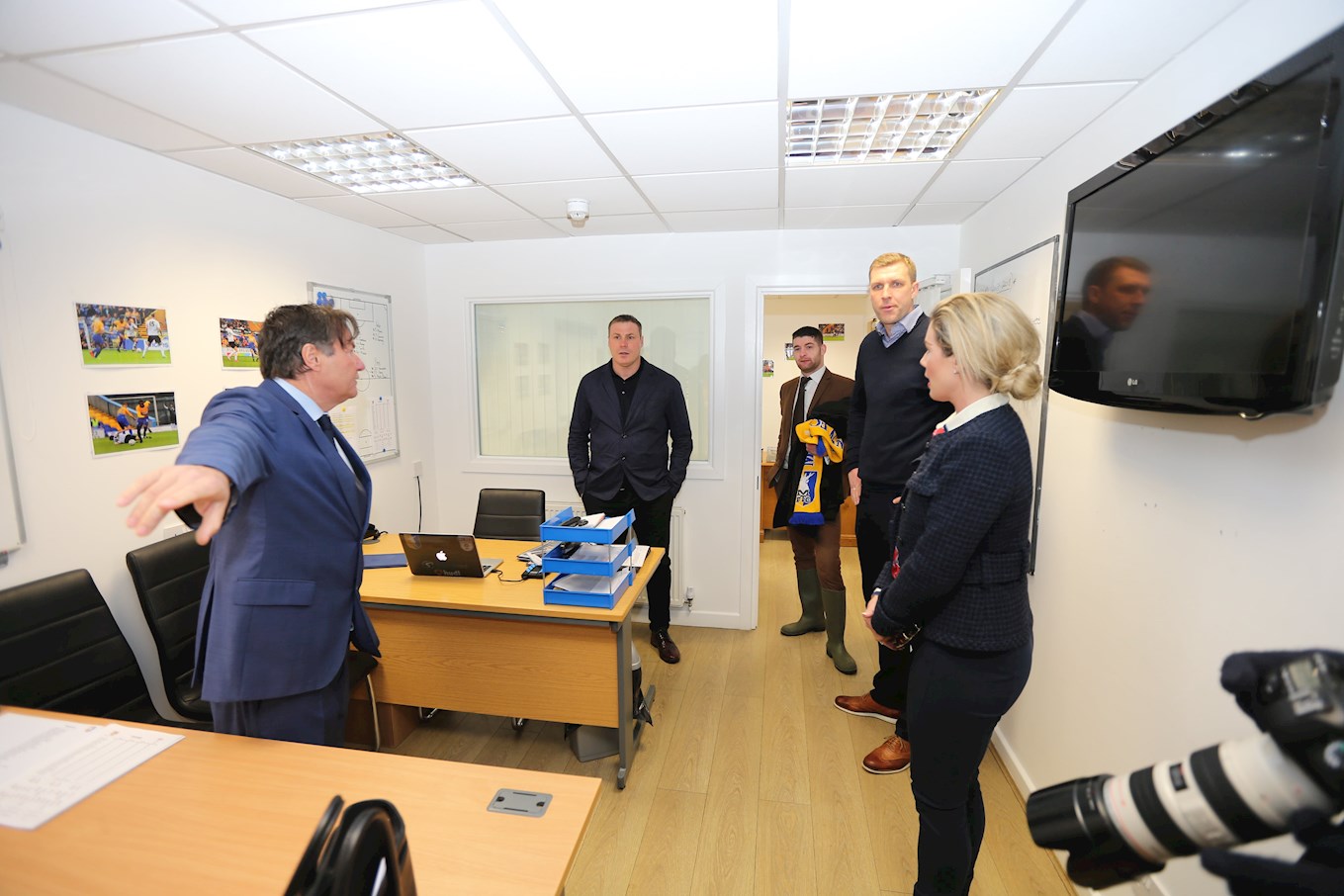 In what has been David Flitcroft’s first full season as manager, Radford has struck up a strong rapport with the Boltonian, admiring the way he has got across his message and methods calmly and effectively.

The former Rochdale, Bury and Chester player has also spoken, several times, of the bond the two men share where football is concerned, not least because both are so passionate about what they are trying to achieve.

“The way David has conducted himself has been excellent; he could not be more different to the manager we had here previously in the way they do things. They are like chalk and cheese.

“He has been brilliant – he’s open to ideas, listens to what you have to say, has valid reasons for wanting to bring in every player he asks to bring in and has helped developed the youth set-up.

“He has got the players in a very good position by taking a considered approach and not being haphazard.” 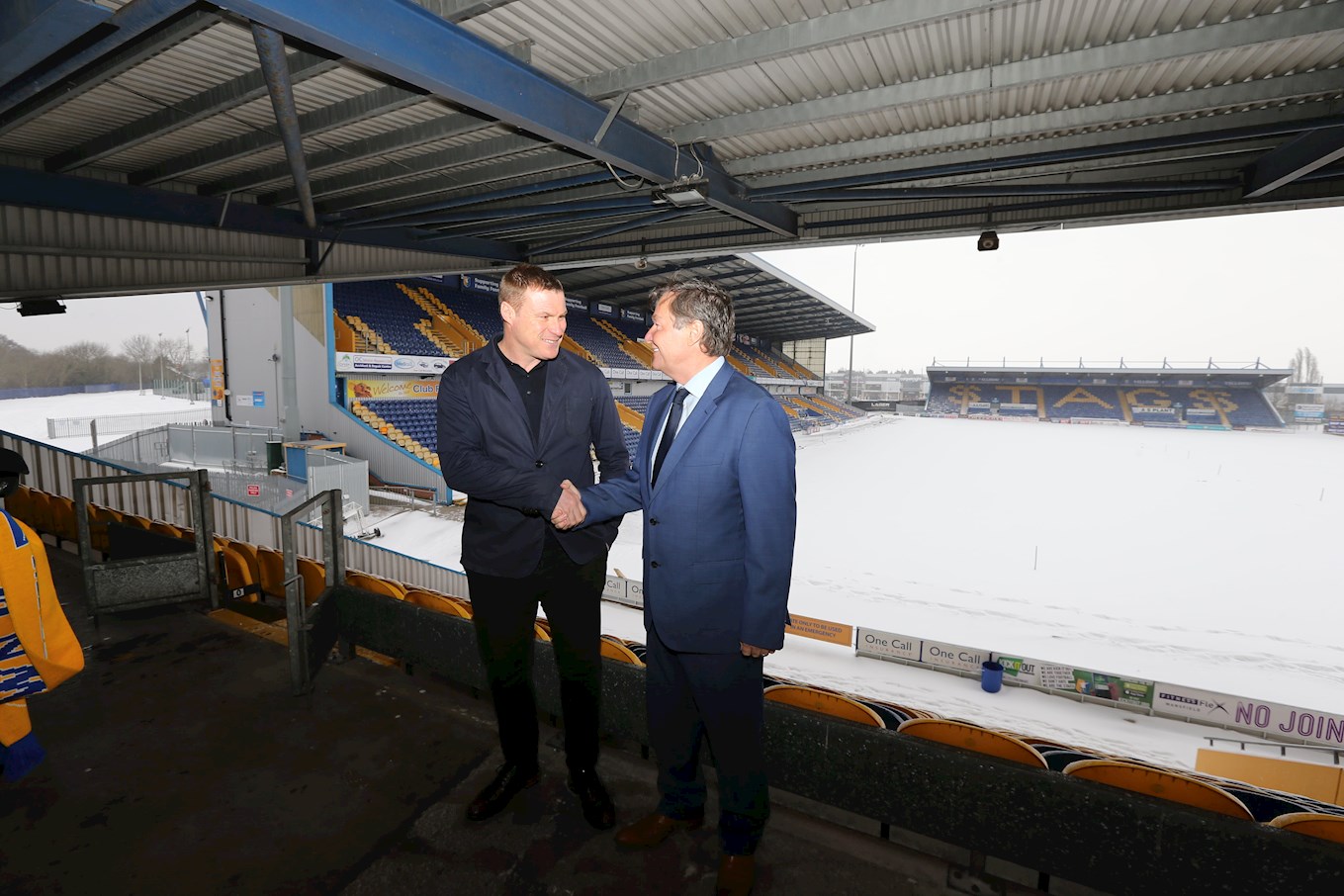 Mansfield have played some sparkling football at times this season, helping to ensure that League crowds have dipped below 4,000 only three times.

In recent matches, figures of more than 5,000 have become the norm, helped by offers to admit youngsters for free for the matches against Macclesfield, Forest Green and Cheltenham.

Radford says: “It’s been great to see the steady rise in attendances – and that’s when I’m at games I always stand up to applaud the fans because I very much appreciate them being there, as I know the players and management do too.

“When I took over the club and we were in the non-league, then we were lucky if we would get 2,000 coming to some home games. It’s never that low anymore, which shows the progress we have made.

“Hopefully it can stay that way through to the end of the season – and in League One if we are promoted.”

The final word is reserved for wife and chief executive Carolyn, who has been at the forefront, along with head of operations Greg Abbott, in Mansfield’s recruitment drive over the past few months. 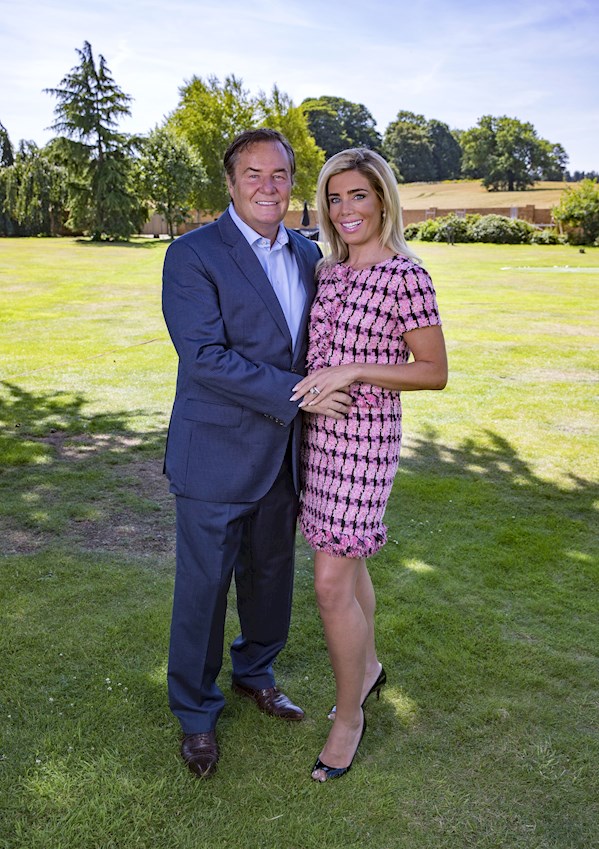 Radford also believes his spouse has done much to put the club on the map, blazing a trail in an industry that has historically been dominated by men.

“I think she’s been a fantastic ambassador for this club since taking up her role,” he says. “She’s done a superb job in getting the name of Mansfield Town out there to a wider audience.

“We’ve had national coverage and been on the television, which is all good for the club’s future, and she’s taken on a lot of hard work in that respect.”


Match-winner Oli Hawkins says Elliott Hewitt’s magnificent goalline clearance in the dying embers of today’s contest was ‘as important as my goal’ as Stags left it late to beat Crewe 2-1 this...


Voting is now open for Stags' Man of the Match from our excellent 2-1 victory away at Crewe this afternoon.


Mansfield Town manager Nigel Clough has lauded the ‘squad contribution’ that saw his side record a dramatic late 2-1 comeback away at Crewe this afternoon.


Nigel Clough makes one change to the side that superbly beat Gillingham 2-0 in Stags' last league outing.