New signing Nicky Maynard says his decision to join the Stags – amidst offers from ‘six or seven’ other clubs – boiled down to Mansfield’s squad, play-style and ambition.

The 32-year-old, who netted 22 goals for Bury last season as they were promoted from Sky Bet League Two, was announced as a Stags’ player on Tuesday morning.

The striker says that he had the pick of several clubs to sign for, yet opted to join John Dempster’s Mansfield after a conversation with the Stags’ boss.

“There were a few [clubs] after me – I had maybe six or seven contracts on the table,” revealed Maynard. “It [decision] was down to the team, the way they play, and their ambition. 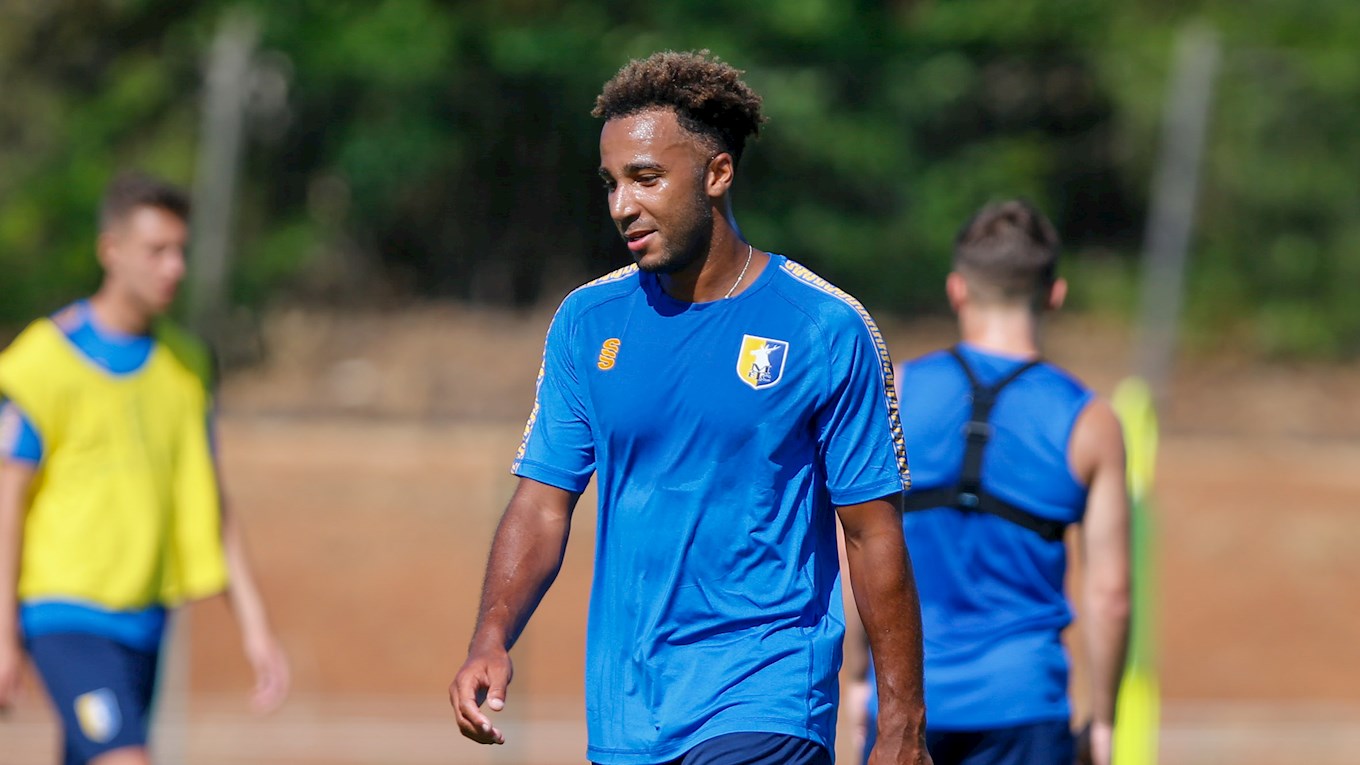 “During the off-season you get a lot of phone calls – agents calling you, managers ringing you. Sometimes it can get a bit tiring – people say what you want to hear on the phone, and after signing on the dotted line, things can change.

“But speaking to the manager [John Dempster], I didn’t feel that, and I can tell that he is a man of his word. I’m looking forward to working with him.

“It’s a new challenge. You go into a new team with expectations [of you], and it’s down to me to prove that those expectations are right.

“I’ll come in with a point to prove to the manager, the fans and my team-mates. I’m hoping that I’ll start off [the season] with a goal and kick on from there.” 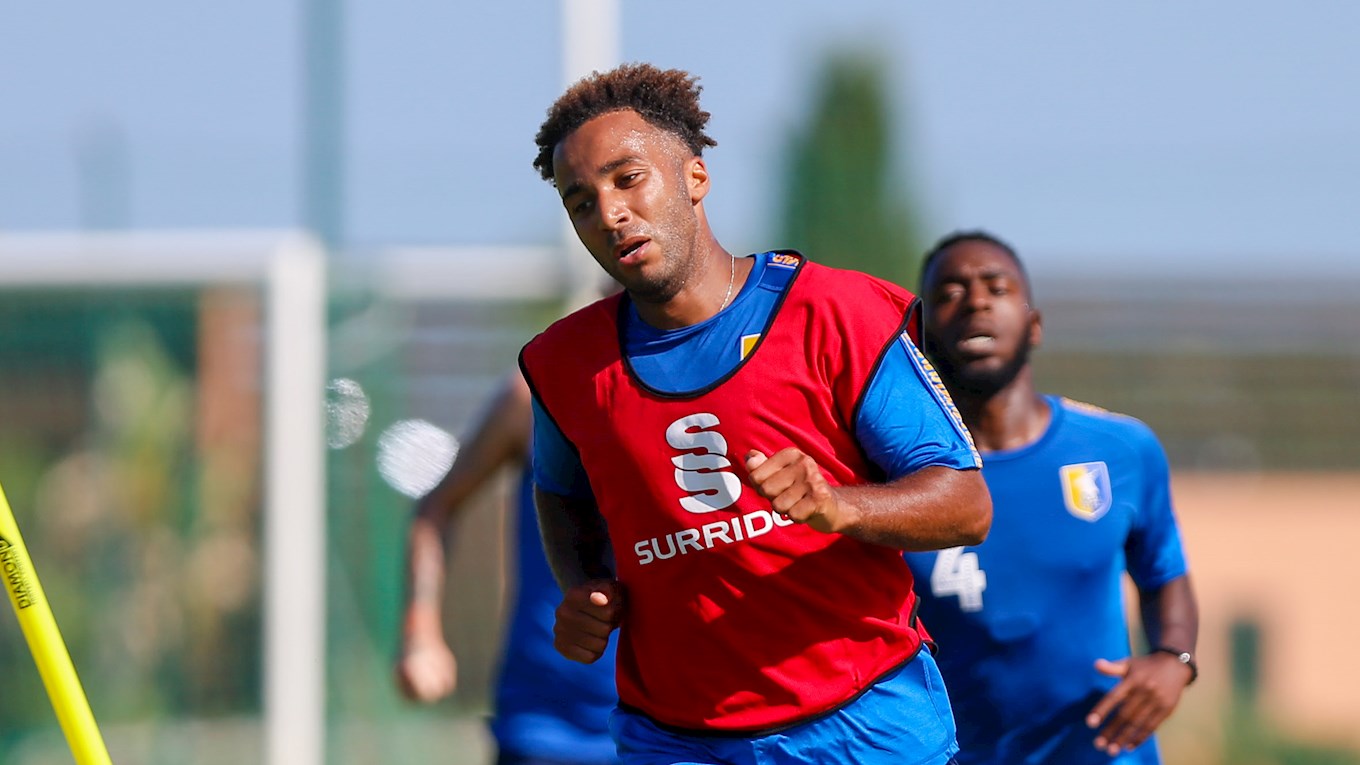 Maynard went onto add that he was made to feel ‘wanted’ by Mansfield, which he says also influenced his decision to make the switch to One Call Stadium.

“I’m just glad to finally get it [deal] over the line,” he added. “I spoke to the manager [John Dempster] and I spoke to Pearcey [Krystian Pearce], the skipper, and they sold the club to me.

“From then on I couldn’t wait to come and meet the lads and start training, to be honest.

“Going back to last season, I felt that Mansfield were one of the better teams in the league.

“They [John Dempster and Pearce] spoke to me about how we’re looking to play this season and how they want me to be a part of it.

“The main thing is the ambition, which is to get out of the league. The gaffer spoke to me and made me feel wanted, and it’s nice to feel that as a footballer.

“It was nice to get picked up in a Rolls Royce [from Faro Airport by chief executive Carolyn Radford] – I was just expecting a taxi back to the hotel to be honest!” 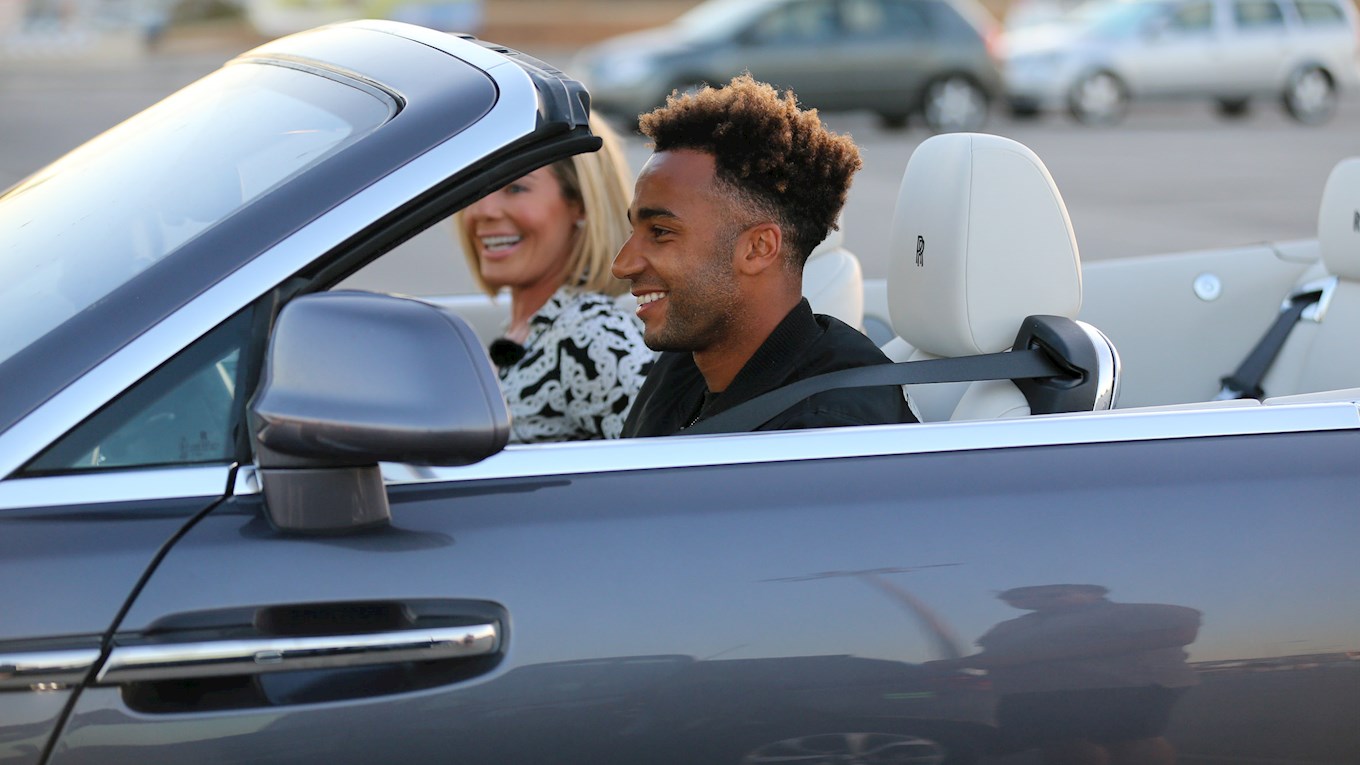 On Tuesday morning, the former Cardiff and West Ham marksman trained for the first time with his new team-mates.

Maynard says that there is a ‘togetherness’ within the Mansfield squad, something which was vital to Bury’s promotion-winning success last term.

“As a whole, the togetherness [in the Mansfield squad] is there. Obviously there was the disappointment of last season, but they don’t look disheartened.

“They look like they have a mission to do this year and are eager to go that one step further. 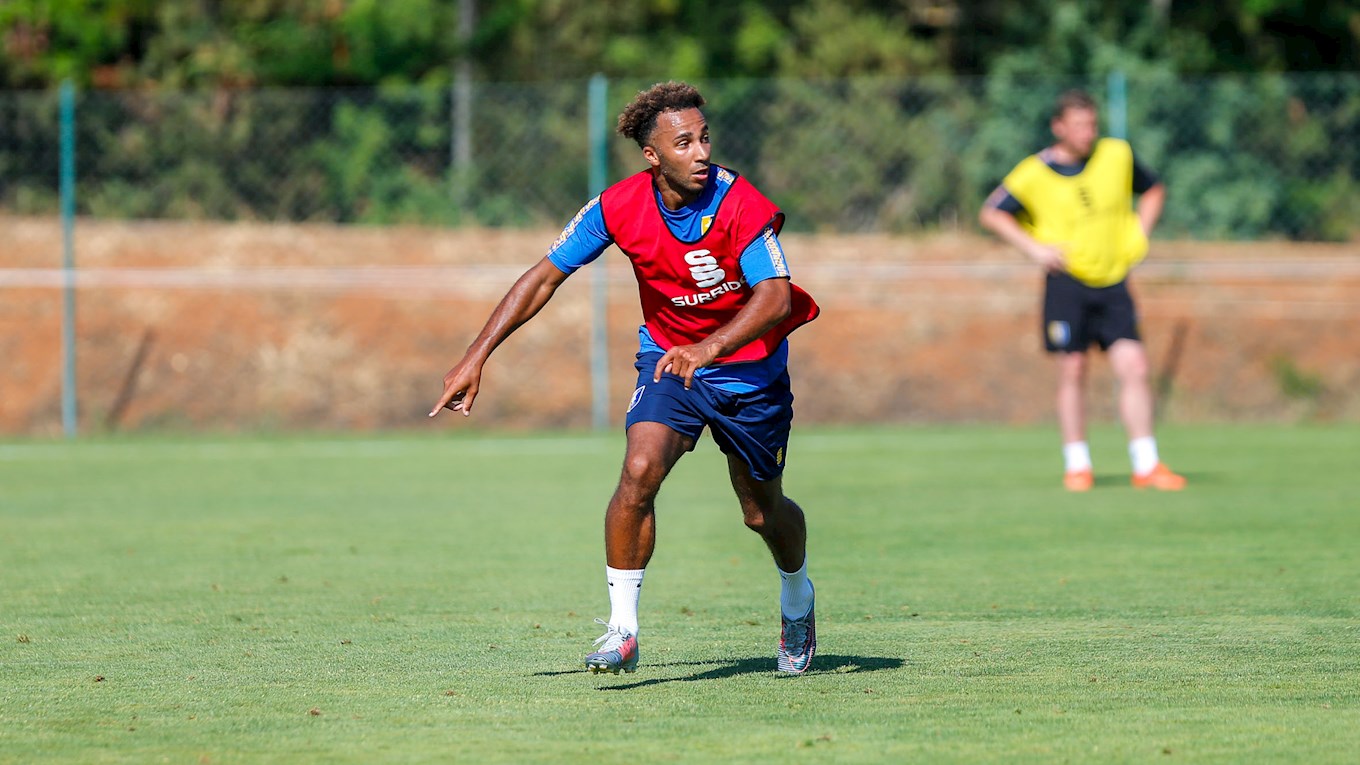 “They made me feel welcome, and seeing them in training, they look very good as a team. I’m looking forward to the season ahead.

“Togetherness was massive [in promotion-winning season with Bury]. It was down to us to get over the line.

“You can have a talented squad, but that only gets you so far. The togetherness of a squad is one of the main ingredients of a promotion-winning side.”

Maynard also spoke of the type of striker he is and what the Mansfield faithful can expect from him on the pitch.

“On a whole, throughout my career, I like to think my goals to game ratio is pretty good. Given the opportunity to play regular football, I know I will score goals.

“I think at the start of my career, I was a scorer of great goals, but not a great goalscorer. Being in the game for a while now, I’ve got the knowhow of being in the right place at the right time. 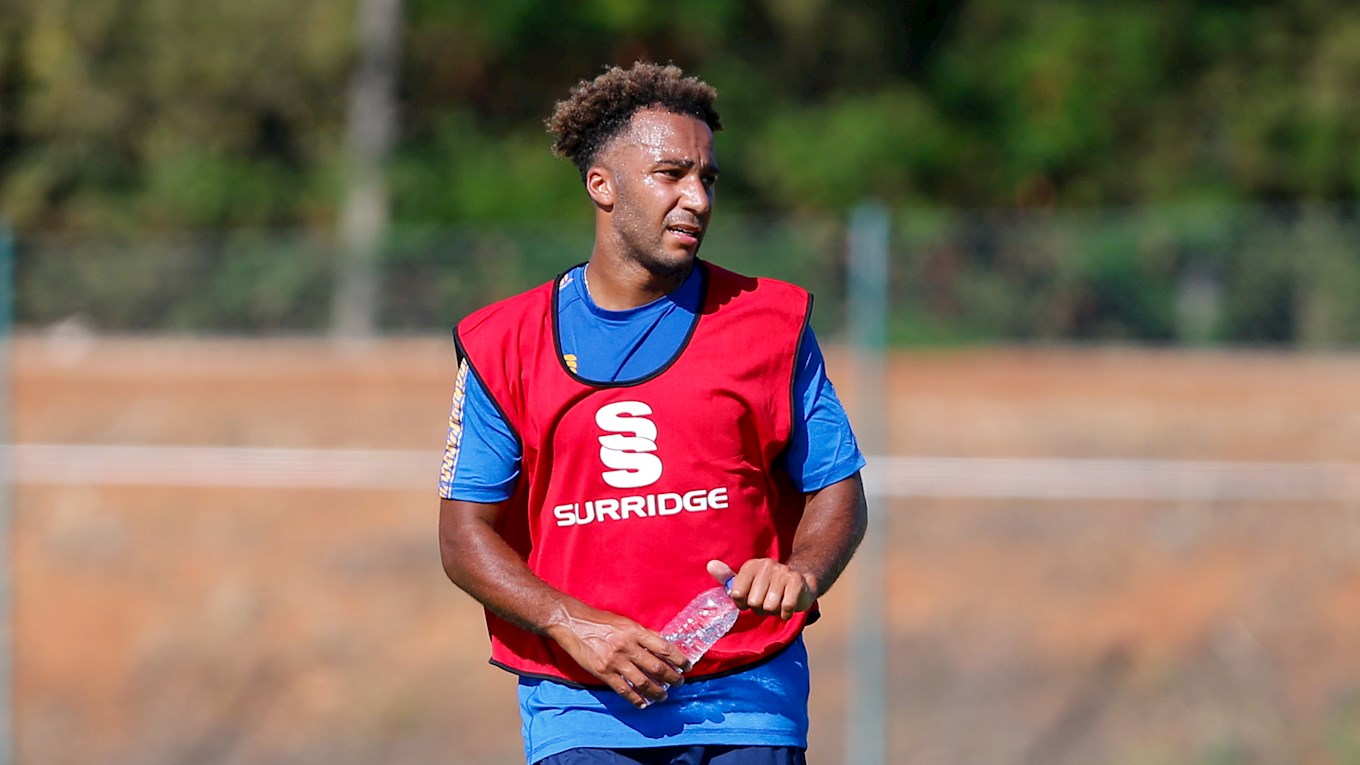 “I just like to think I’m a goalscorer. I don’t care how the goals come, as long as I’m scoring goals.

“I’ll never drop my head – as long as I’m given the opportunity, I will give it my all.

“I used to be [a player that sets targets], but now I just go into every game expecting to get goals. I didn’t have targets last year, I just enjoyed my football and let the goals speak for themselves.