Stags’ manager John Dempster says that alongside being pleased with Mansfield’s ‘combination play’ in today’s 1-0 win over Alfreton, he confirmed his men came through the game ‘unscathed.’

Under-21s’ midfielder Alistair Smith scored the game’s only goal late on, with his excellent first-time finish at the back post.

The Mansfield boss described this afternoon’s clash as a ‘really good exercise’ for his players.

“We probably saw more of the ball today than we have in the previous friendlies,” he said. “The pitch was immaculate, so credit to Alfreton for that.

“Some of the combination play – probably more so in the second-half – was good. I’m pleased with bits [of the game] and it was brilliant for Alistair [Smith] to get a goal. 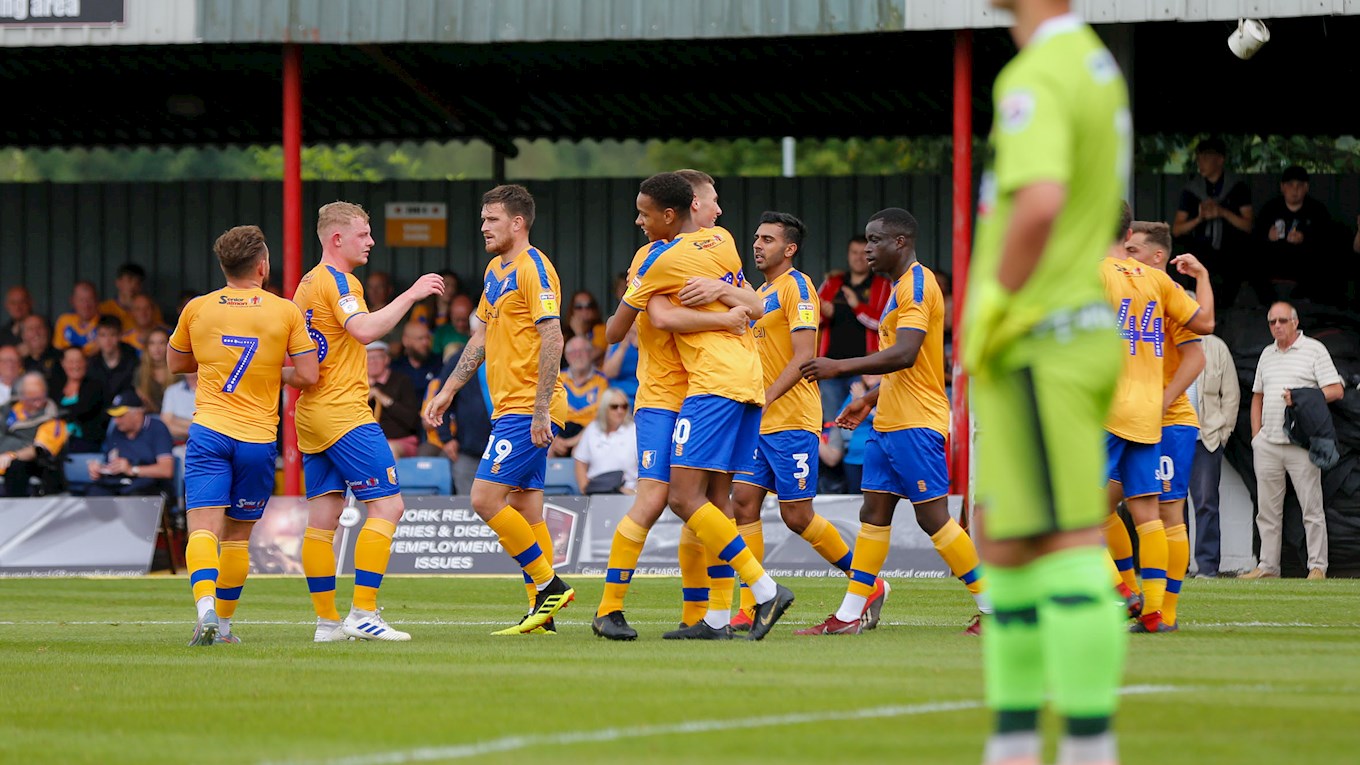 “There were times where he [Smith] could have passed the ball a bit quicker, but that could be a confidence thing.

“Overall, it was a really good exercise. We came through unscathed, with minutes in the bank for the boys.

“If you look at the Bradford [Park Avenue] game and the Alfreton game, there are glimpses [of patterns].

“Danny Rose and Nicky Maynard can definitely play together, and you look at Cooky [Andy Cook] in the second-half, with the problems he caused Alfreton’s centre-halves through physical dominance. You can see he is going to be effective.

“Mal Benning came on and did well today – he was very impressive on the ball. CJ’s [Hamilton] pace is there to see. Macca’s [Alex MacDonald] workrate, along with Willem [Tomlinson] and Bish [Neal Bishop], did really well today.

“Pearcey [Krystian Pearce] was strong as anything and reads the game brilliantly. I don’t want to miss anyone out, but I’d be going through the whole squad!

“Overall, as an exercise, it’s been good.”

The Mansfield boss was also impressed by the performances of two trialists who lined up for the amber and blue this afternoon.

“They [trialists] did well,” added the manager. “The right-back was comfortable on the ball, which you’d expect. The number ten in the second-half is a good athlete, powerful, and probably something different to what we’ve got.

“We’ll probably have another look at them in training, but they certainly didn’t lower the standard today.”

The manager added that if he were to make any more summer signings, he would be looking to recruit ‘one or two’ more players.

“If we were to add any more [players] it wouldn’t be five or six, it would be one or two at most.

“The squad is a very strong one, and I don’t want to bring players in for the sake of it.

“We’re also supported by a very good under-21s [squad]. You look at the boys who featured today, they didn’t look out of place.

“Kian Sketchley is actually an under-18, and he played well in the first-half. He was a little bit nervy at times, but that’s to be expected.

“Things are in a good place. Quality needs to go up, and intensity certainly will in terms of workrate on and off the ball.

“I’m looking forward to getting back on the training ground on Monday.”

The manager expects that the 24-year-old will feature more heavily over the forthcoming matches.

“He [White] is fine. He came through half-an-hour at Bradford, but I’m told by the sports science team that he’ll probably should play a larger part in the next game.

“It will be a gradual build [White getting to full fitness].”

iFollow Stags subscribers can watch the manager’s interview by logging into mansfieldtown.net/ifollow.