The home side produced a stubborn performance and grabbed two second-half goals through Elliott Sartorius and Gianluca Bucci, which saw them overturn Stags’ one goal advantage, after an exquisite solo effort from Riley O’Sullivan put the visitors ahead.

A succession of chances came and went for Stags in the last 20 minutes of the game as they searched for an equaliser, but Lincoln held on to take all three points and inflict Stags’ first league defeat since mid-October.

Manager John Dempster made one change to his side’s starting XI, who beat Oldham 4-0 last Saturday, with Nathan Saunders coming in to replace the injured Jamie Chisholm. It was also good news for Mansfield as forward Kamen Cashmore was included in the squad – back amongst the substitutes - after a lengthy spell on the sidelines through injury.

The game got off to a bright start when, in the opening minutes, Noah Stokes lofted a through ball over the Lincoln backline in the direction of the academy’s leading scorer this season, Jimmy Knowles.

Knowles appeared second favourite to get to the ball but used his strength and pace to shrug off the attentions of the defender and go through one-on-one with the goalkeeper. However, having rushed-out 30 yards from his goal-line, Matthew White read the situation well and came out to block Knowles’ shot.

The home side then had a chance to test Keaton Marrs, when Sartorius received the ball inside the Stags’ penalty area and worked space for the shot, before drilling an effort which the Mansfield ‘keeper got down well to save and hold.

With 20 minutes on the clock, a moment of magic from the in-form O’Sullivan brought the game’s first goal.

The Stags’ number 11 seized upon Joshua Burns, as he dwelt upon the ball in defence, dispossessing his man and surging forward with the ball at his feet, 45 yards from goal. O’Sullivan then used a turn of pace to burst past the final defender, shifting the ball onto his left, before letting fly with a thunderous strike that rippled the back of the net before the ‘keeper had a chance to react.

The goal was O’Sullivan’s fourth in his last three appearances – putting him on eight for the season.

Midway through the first half, a Lincoln free-kick from the left-hand side drifted in towards the back post finding Bucci, who volleyed just wide from eight yards out.

As the half drew to a close, a quick free-kick from the home side led to Jordan Adebayo-Smith shooting from the left side of the penalty area, but Marrs was well positioned and saved.

Eight minutes after the restart, the Imps managed to find that equaliser when a free-kick from deep was drifted into the back post, headed back across the goal and sweetly volleyed into the back of the net by Sartorius.

Just four minutes later, the home side got their noses in front when a corner from the right-hand side was met with a well-timed header from Bucci, who saw his effort take a deflection and nestle into the net, just inside of the near post.

Lincoln almost added a third soon after a free-kick 30-yards out was hit by Sartorius, who sent the ball dipping and swerving towards the far corner, only for Marrs to get across his line and pull-off a splendid save.

Stags were punished for an uncharacteristically slow start to the half, but they were soon back on top in the game and pushing for an equaliser.

With just under 20 minutes remaining, Knowles was expertly threaded through, but as the Stags’ striker shaped to shoot, a tremendous last-ditch tackle from Burns prevented his goalkeeper from having to be called into action.

Then, a powerful Tyrese Sinclair free-kick from 20 yards out brushed the top of the crossbar with the ‘keeper rooted to the spot.

Second half substitutes - Rio Molyneaux and Joao Rangel - then combined down the right-hand side, before the latter delivered a floated cross into the area for Sinclair to attack. The forward got to the ball and managed to get his header on target, but it perhaps lacked the power and precision to truly trouble White, who got across his line to save.

As the 90 minute mark approached, Molyneaux whipped in a ball from the byline which Rhys Sarson attacked at the back post, but the Stags’ forward couldn’t quite direct his header goalwards from the tight angle, and instead, headed the ball back across goal before it was eventually cleared.

Into stoppage time, Sarson timed his run well, and from the left side he showed incredible vision to play a reverse pass into the path of Knowles, who desperately tried to get on the end of it but couldn’t quite gather the ball in his stride.

When these two sides last met, Sinclair scored an equalising goal with the last kick of the game in a 3-3 draw. This time, he had the chance to do the same. He lined up a free-kick 25 yards out, before whipping the ball up and over the wall, but watched as his effort somehow evaded the ‘keeper’s far post and go behind.

The referee’s final whistle brought the game to a close, leaving Stags unfortunate not to have taken anything from a clash which they could have so easily won on another day. 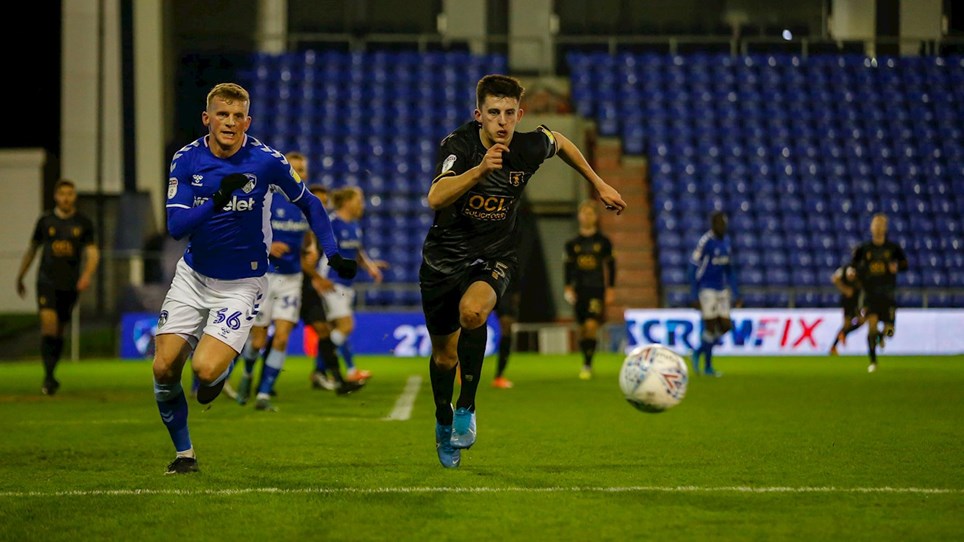 
Mansfield Town fell to a 3-1 defeat against Oldham Athletic at Boundary Park on Tuesday evening.


Mansfield Town produced a scintillating performance to record a 3-0 victory over promotion-chasers Bradford City at One Call Stadium on Saturday afternoon.


First-half efforts from Omari Sterling-James and Otis Khan gave Stags’ reserves a deserved 2-1 victory away at Port Vale in the Central League Cup on Tuesday afternoon.


Mansfield Town were dealt a 3-1 defeat by Plymouth Argyle despite creating a number of chances at Home Park on Saturday afternoon.