With the January transfer window now closed, we take a look at Stags’ activity over the course of the window, and how our new signings have fared since their arrivals…

Jordan Smith – Goalkeeper (in on loan from Nottingham Forest) 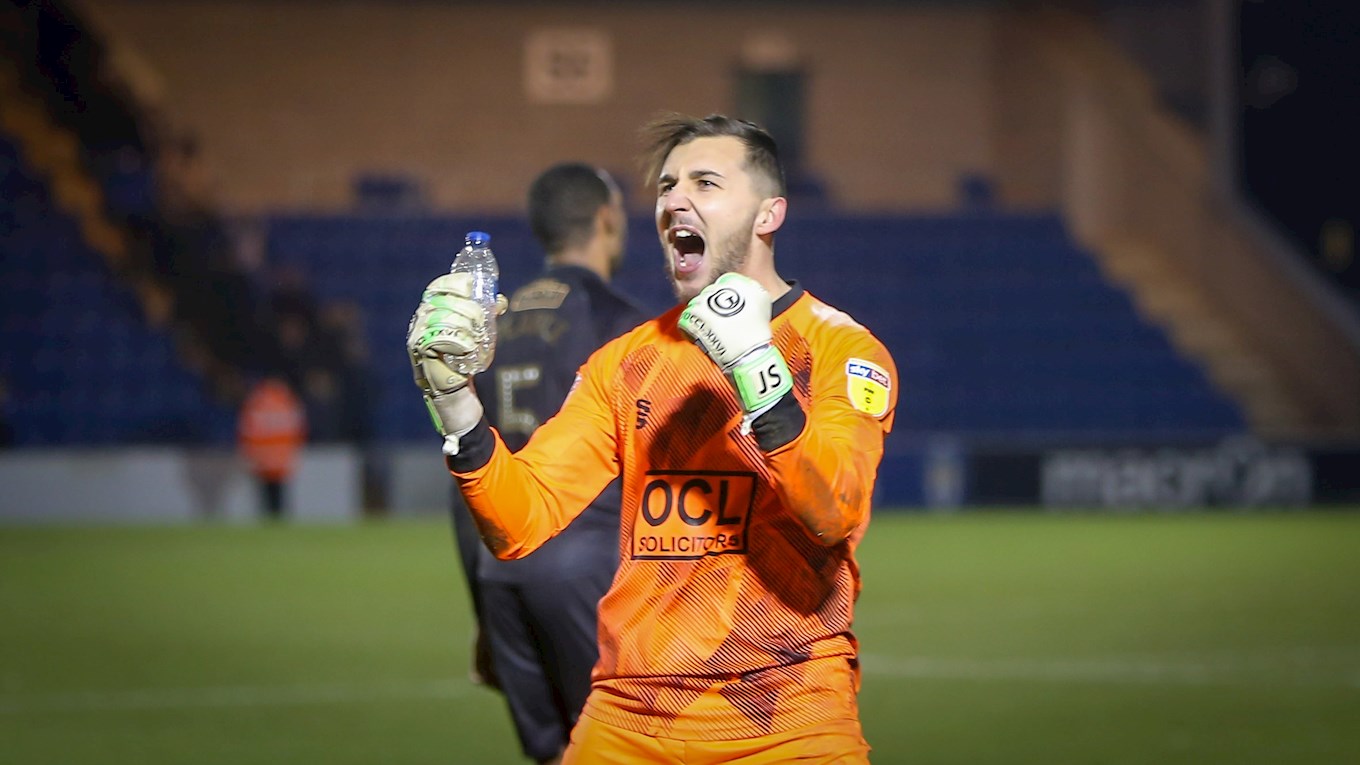 Smith was our first January addition, and was brought in by manager David Flitcroft following the long-term knee injury suffered by goalkeeper Bobby Olejnik. The 24-year-old has made an excellent start to life at Mansfield, making pivotal saves in our wins over Crawley Town and Colchester United.

“[I view this challenge] with sheer excitement. I'm a local boy, I come from round here and live in Kirkby-in-Ashfield. This is a club I have always kept my eye on, and it's really exciting now that it's a place that's on the up.

“You only have to look at the table and the people who are on board here to see where this club is going, and it's something I just really want to be a part of.”

Jorge Grant – Attacking-midfielder (in on loan from Nottingham Forest) 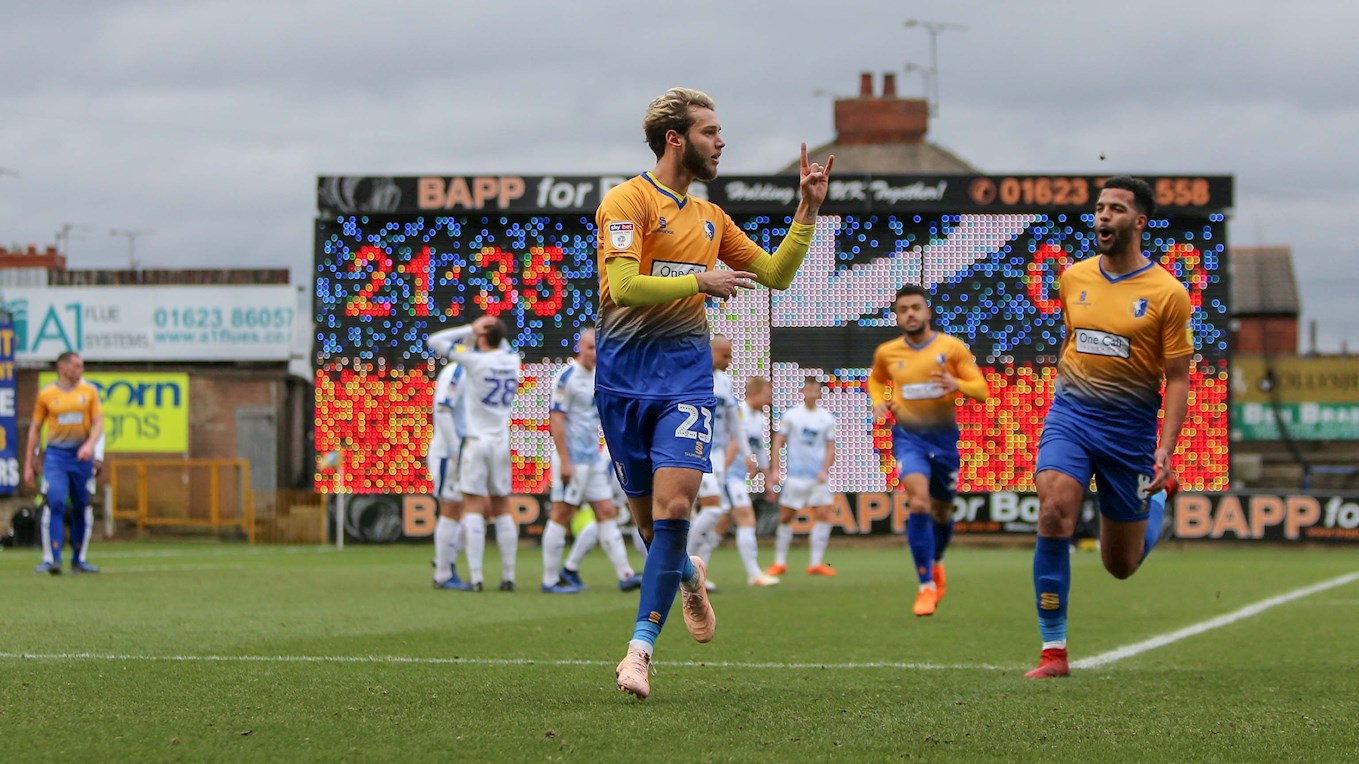 Creative attacking talent Grant joined the Stags on loan until the end of the season, and has hit the ground running in his first few appearances. The 24-year-old has fired in three goals in his first four appearances with the Stags, and also registered an assist for fellow Forest loanee Tyler Walker in the victory over Colchester. The pick of his goals came in the 3-0 win over Tranmere, a trademark free-kick that arrowed into the top corner.

“It’s exciting. I’m really happy to be here and I can’t wait to get started. Promotion is the main target, because I’m here as a Mansfield player.

“One of the things that the gaffer said to me was ‘come and get a promotion on your CV.’ Tyler [Walker] is here as well, who I know really well.

“[Walker played a] massive [part] to be fair. We spend a lot of time together off the pitch. I’ve known him since he was 16 or 17, so he’s one of my best friends in football. I can’t wait to be playing with him.”

Nicky Ajose – Forward (in on loan from Charlton Athletic) 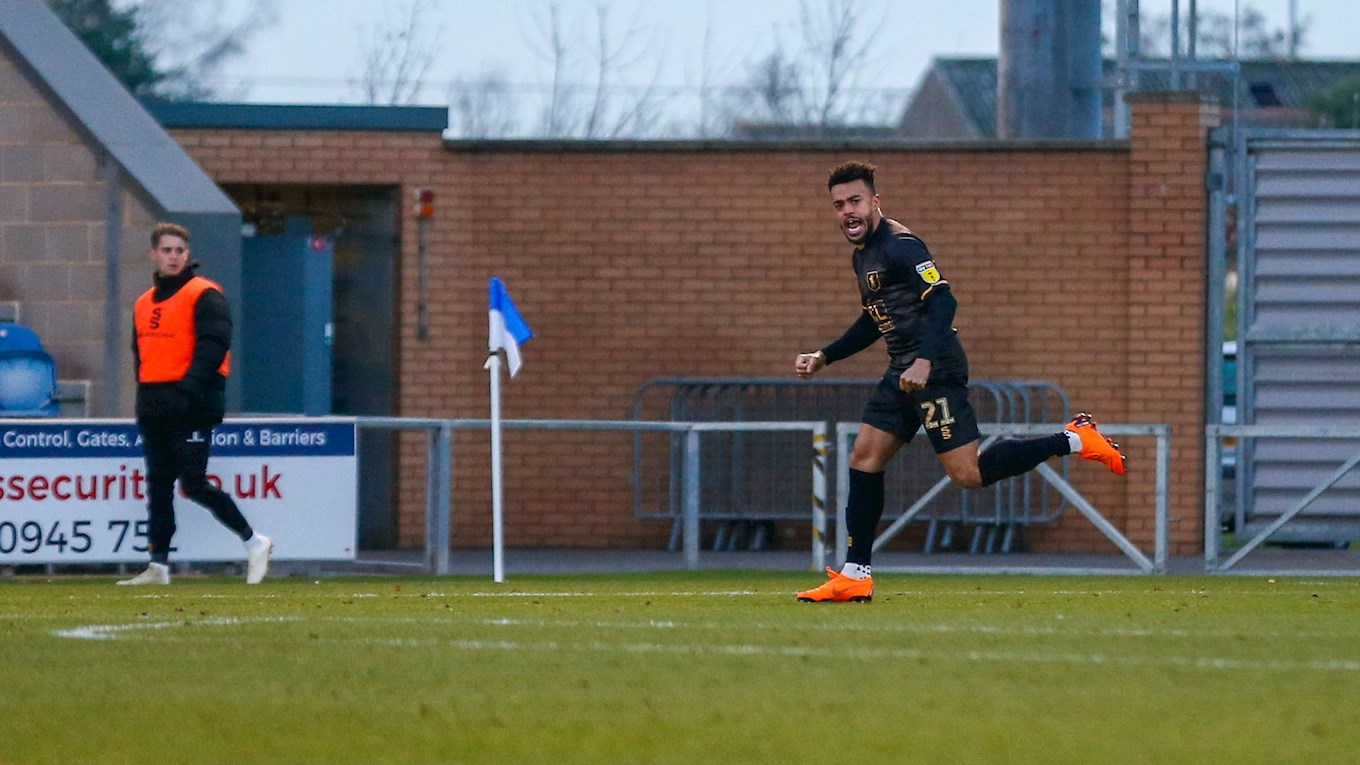 Livewire striker Ajose also joined us on loan this month, arriving on the same day as Grant. The striker has already opened his account for the season with his back-post finish against Colchester, a game in which he provided the assist for CJ Hamilton’s match-winning strike. He also assisted Grant for his well-taken finish against Forest Green Rovers.

“I want to try and win something meaningful and be remembered somewhere, so it [move to Mansfield] was a no-brainer for me.

“The lads have done brilliantly to put us in the position where we are [in the table] and the manager has brought me and Granty in to try and help get us over the line. If I can do so, which I’m sure I can, that would be brilliant.” 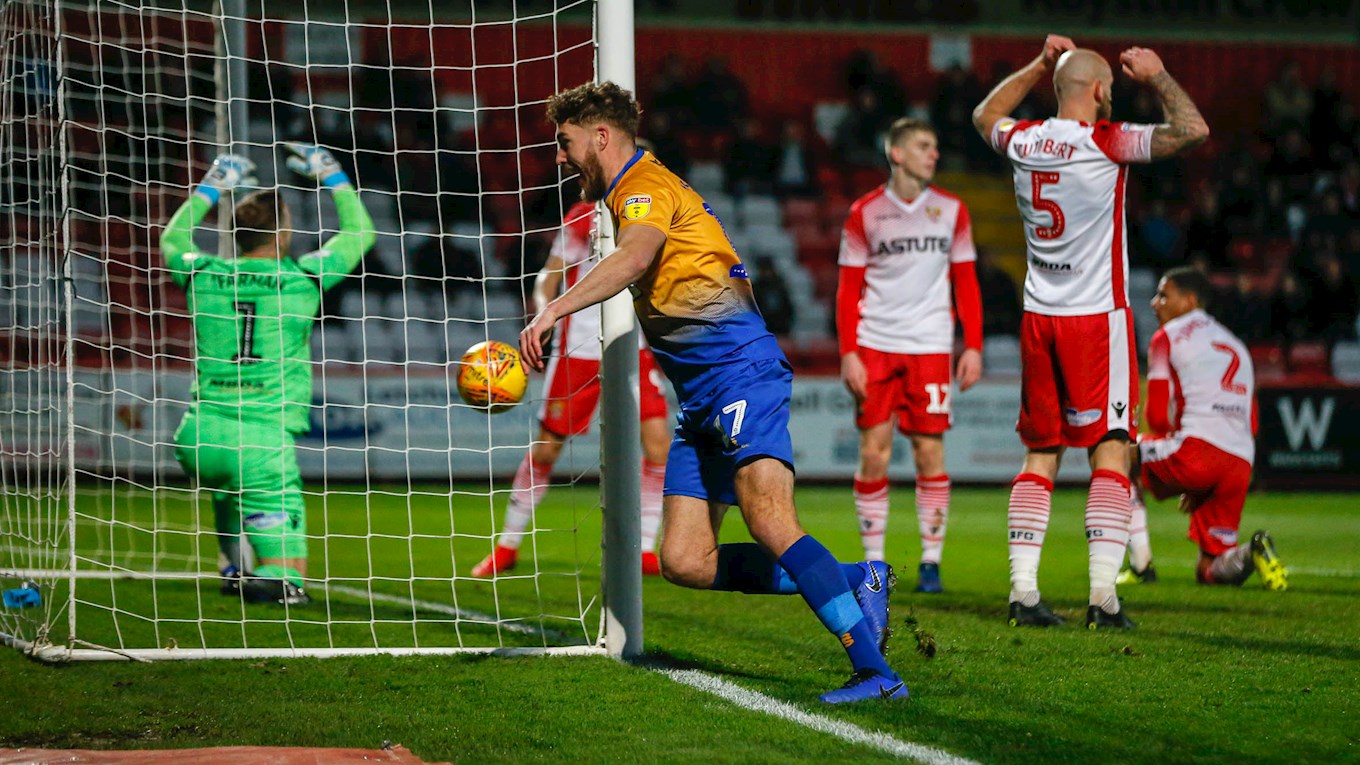 After spending this season on loan at One Call Stadium, Sweeney signed on a permanent basis prior to our mid-week clash away to Forest Green Rovers. The 21-year-old has been superb for the Stags over the course of this campaign, appearing 32 times in the back-line that currently holds the best defensive record in Sky Bet League Two.

“I think it’s all down to the environment the gaffer has us in. I’ve said before it’s an easy side to come into – everyone knows their roles and responsibilities – so it’s one of them where I try to give 100 percent every game.

“I’ve thoroughly enjoyed my time – and I’m really excited about the prospect of the next two-and-a-half years here.”

Gethin Jones – Defender (in on loan from Fleetwood Town) 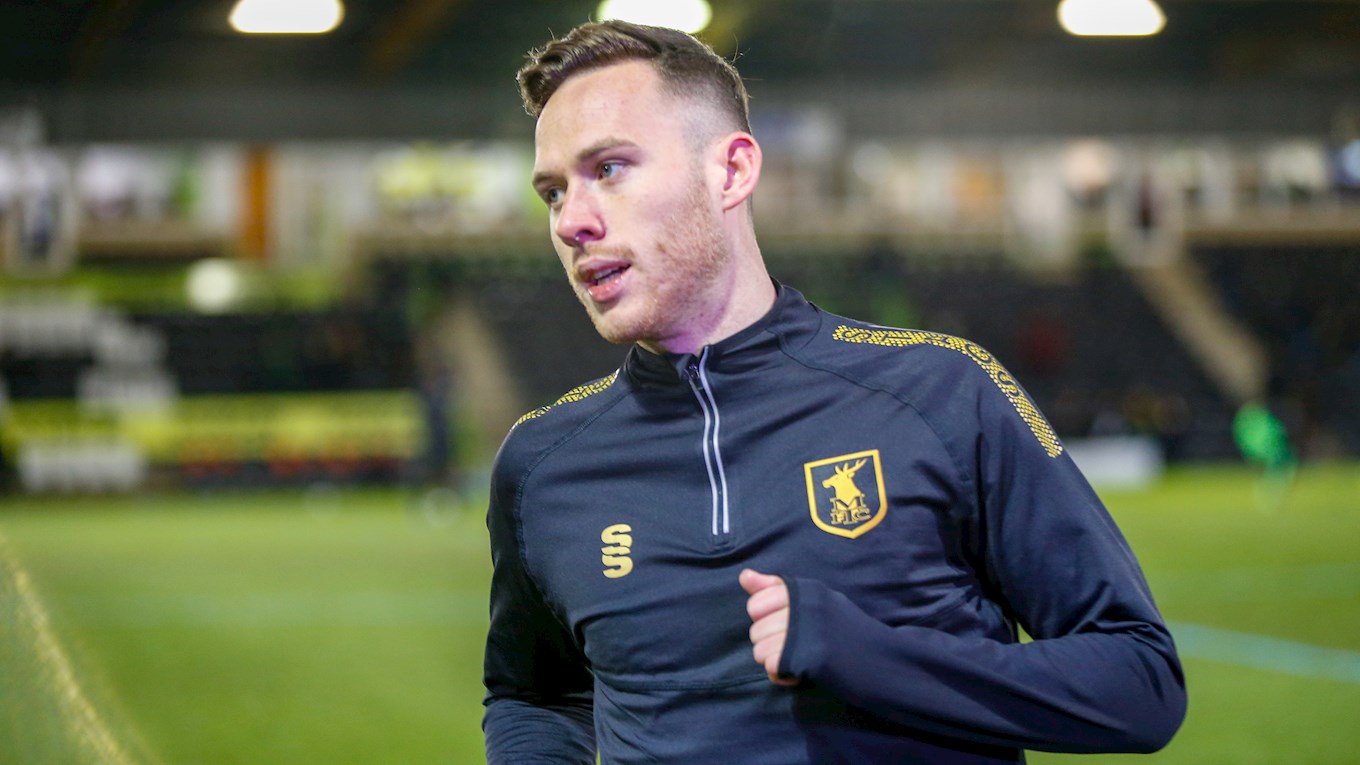 We added to our ranks with the loan signing of right wing-back Jones, following Hayden White suffering a broken leg in the clash away to Colchester. Jones made his debut in the mid-week fixture against Forest Green – just a day after signing for the club - coming on as a substitute.

“As soon as I got told by Fleetwood and my agent that Mansfield wanted to sign me, I was made up.

“I’d seen how well they’ve been doing lately and I think it’s a perfect place to get game time, get experience and hopefully get Mansfield up.”

Attacker Sterling-James joined Vanarama National League North side Brackley until the end of the season.

The 25-year-old had made three appearances for Mansfield this season before his loan switch. Sterling-James made his debut for Brackley in their recent clash against Bradford Park Avenue.

Calum Butcher – Midfielder (out on permanent deal to Dundee United)

Midfielder Butcher made a deadline day return to former side Dundee United, after making 19 appearances for the Stags this term.

Butcher enjoyed a two-year spell with the Scottish side from 2013, before joining Burton Albion.

On deadline day we announced that the contract of winger Paul Anderson had been terminated by mutual accord,

The 30-year-old made 40 appearances in all competitions for the Stags last term but has been unable to force his way into the line-up this season. 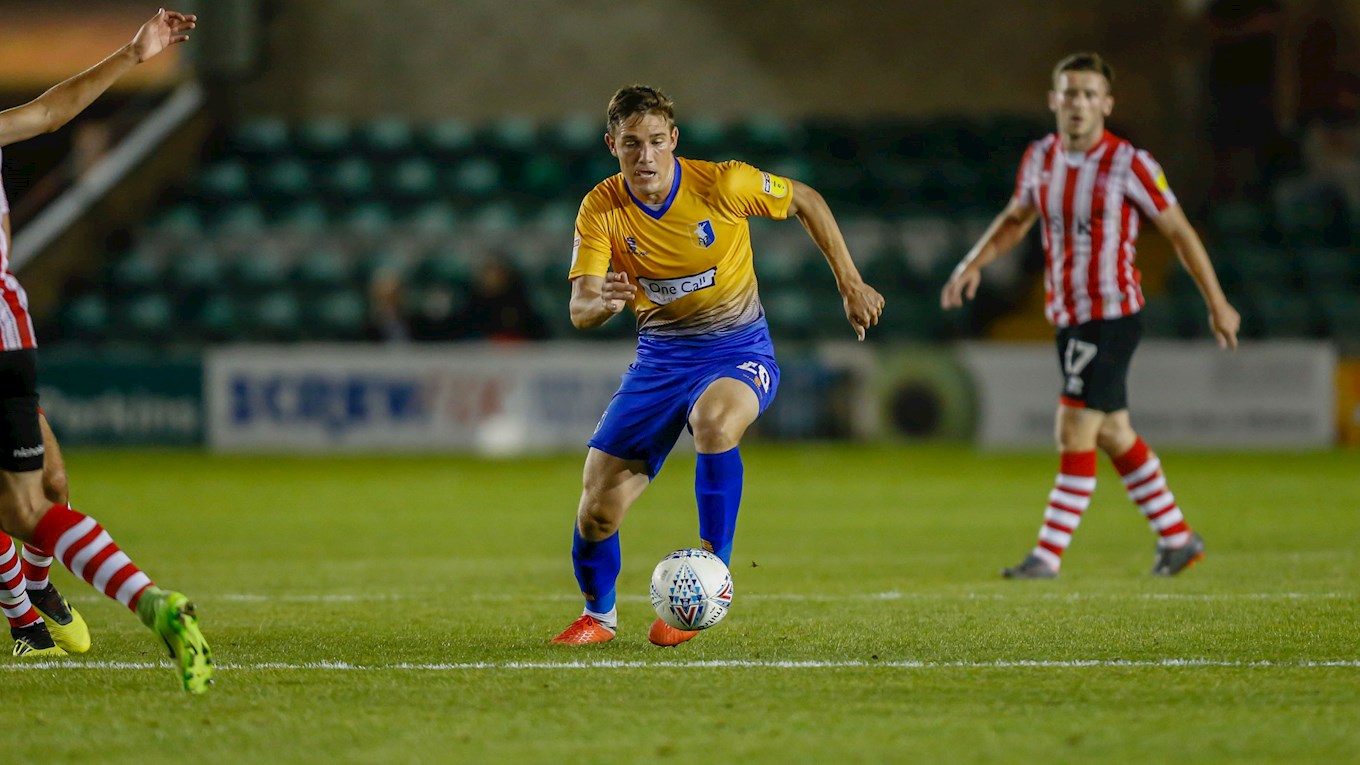 Midfielder Elsnik returned to parent club Derby after spending the first half of the season on loan at One Call Stadium.

The 20-year-old made 24 appearances for Mansfield during his time at the club, scoring four times. He has since joined fellow Sky Bet League Two side Northampton Town.

Iyrwah Gooden – Forward (out on loan at Ramsbottom United)

He recently scored a superb solo effort against Skelmersdale United, in which he ran from his own half before finishing confidently to the far corner.

Kane Baldwin – Defender (out on loan at Coleshill Town)

After impressing in previous loan spells, Baldwin had his loan deal with Coleshill Town extended until the end of February. The defender has been given plenty of game time of late, starting four of Coleshill’s last five games.

Henri Wilder – Defender (out on loan at Lewes)

Following a hugely positive spell at Lewes FC, centre-back Wilder recently made a return on loan to the Rooks. We recently spoke with Lewes' manager, Darren Freeman, who was highly complimentary of the young defender.

“I think his honesty [is his best quality],” said Freeman. “Not a lot of people look at that, but that’s a quality I look for in players.

“He’s an honest player, and I think that with his winning mentality, he reminds me of a young Stuart Pearce.

“There aren’t many players like him around anymore. He wore his heart on his sleeve and had a ‘never say die’ attitude. He has an abundance of qualities.”

Nyle Blake – Forward (out on loan at Alfreton Town)

Versatile forward Blake joined Vanarama National League North side Alfreton on loan during the January window, however, his game time has been limited due to injury.

Cameron Healey – Midfielder (out on loan at AFC Mansfield)

Midfielder Cameron Healey made a month-long switch to AFC Mansfield, and has made a good impression during his short spell with the Bulls. He has started three of the last four games for the Evo-Stik East Division side, which included a comfortable 3-1 victory away to Lincoln United.