Assistant manager Lee Glover says there were plenty of ‘positives’ on show from the Stags in tonight’s Leasing.com Trophy clash with Port Vale, but urged the amber and blue to cut out ‘silly mistakes’ ahead of Saturday’s Sky Bet League Two encounter with Cheltenham.

Winger CJ Hamilton (below) put Mansfield ahead in the second-half, but strikes from Port Vale’s Rhys Browne and Jake Taylor saw the hosts ahead.

Substitute Omari Sterling-James forced a penalty shootout with a fantastic strike in added time, which the Valiants went on to win 4-2.

Speaking after the game, Glover stated his belief that Mansfield were the better side in the clash at Vale Park.

“First-half I thought was pretty even,” he told iFollow Stags. “At half-time we asked the lads to be a little more aggressive and get up the pitch.

“I thought we played quite well in the second-half, but unfortunately a little mistake gave them a way back in. “We got back in the game with a late, great [Sterling-James] goal, then they took some decent penalties and we didn’t.

“Five lads put their hands up to go and be brave but on the night, we didn’t score the penalties and they did.

“I thought we deserved to win. In the second-half I thought we were in control and had some nice periods of play.

“I think we could have been a bit more ruthless in the final third. I thought we played better in large periods of the game, but it’s about turning those [spells] into goals.

“On the night I thought we were the better side, but we’re gifting people goals. Ultimately, a mistake cost us and let them get back into the game, but people will learn from it and we’ll help them with that.

“If you’re playing well and not winning, you have to look a bit deeper. Saturday [Cheltenham at home] is a massive game, but if we can play like we did in the second-half, we’ll be a threat to teams.

“We want to take the good parts of tonight and stop the silly mistakes [on Saturday]. As soon as we stop them, we have a good chance in games.”

The assistant manager spoke of the changes that were made for the encounter, while also providing updates on defenders Krystian Pearce and Kellan Gordon, who missed the game.

“We made a few changes – we’ve had some illness in the camp so the gaffer [John Dempster] wanted to freshen it up with a few changes.

“Clarkey [James Clarke, below] came in, Macca [Alex MacDonald] and Bish [Neal Bishop] came in, Otis [Khan] came back. So there were a few changes. 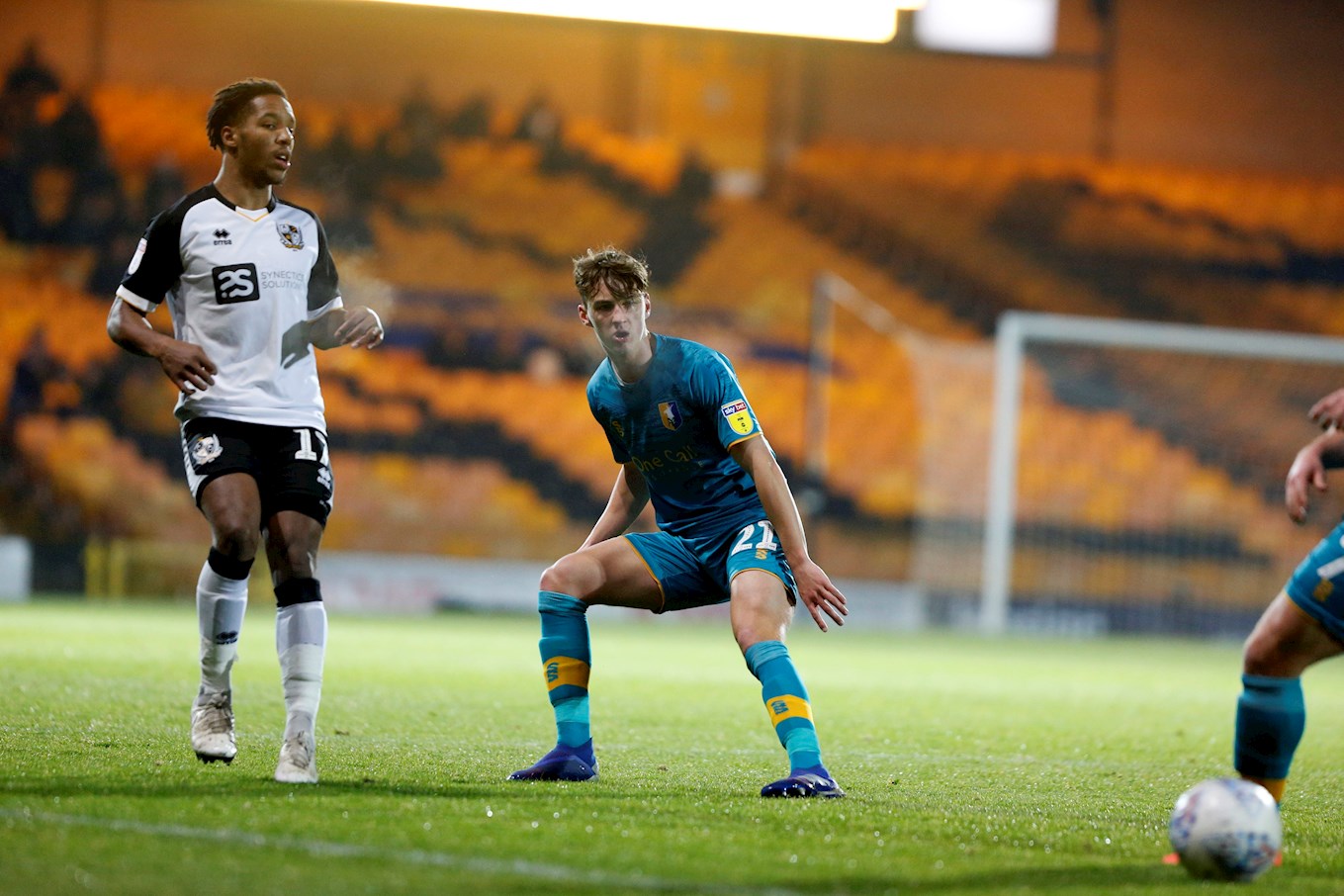 “Krystian Pearce should be back for Saturday – he’s got a bug. We needed to be cautious with him.

“Kellan’s [Gordon] last couple of games, he’s been playing with some back pain. He’s had a few painkillers and played through it for the club – we want people to show that type of determination but we have to be careful.

“It has come to the stage where we need someone to have a look at the problem, but that attitude he’s shown is something that we want to encourage. I think he’ll be available for Saturday.”

Glover also reflected on some of the performances that Stags’ alterations displayed this evening, while also attaining that there is still a positive spirit within the Mansfield dressing room.

“I thought Bish and Macca did well and Clarkey was great at right-back. I thought CJ [Hamilton] had one of his better games – I thought he looked dangerous.

“He got himself a goal and caused a threat. You look at the positives and there were a few.

“But we need to make sure that on Saturday we know what we need to do and to cut out these silly mistakes.