Stags’ boss John Dempster says that he will look to use Saturday’s convincing 2-0 victory away to Carlisle United to build momentum in Sky Bet League Two.

Mansfield welcome Leyton Orient to One Call Stadium on Tuesday evening for a 7.45pm kick-off and the manager says that his side will be looking to add to the ‘good’ points total accumulated thus far.

However, the boss says that the O’s will pose several ‘challenges’ to the amber and blue in their latest league fixture.

“They [Leyton Orient] are a physically big side but they play possession football,” he said. “So they’ll pose us two different challenges in those areas.

“They’re a team that will have a lot of confidence because of that promotion, coming up from the Conference. 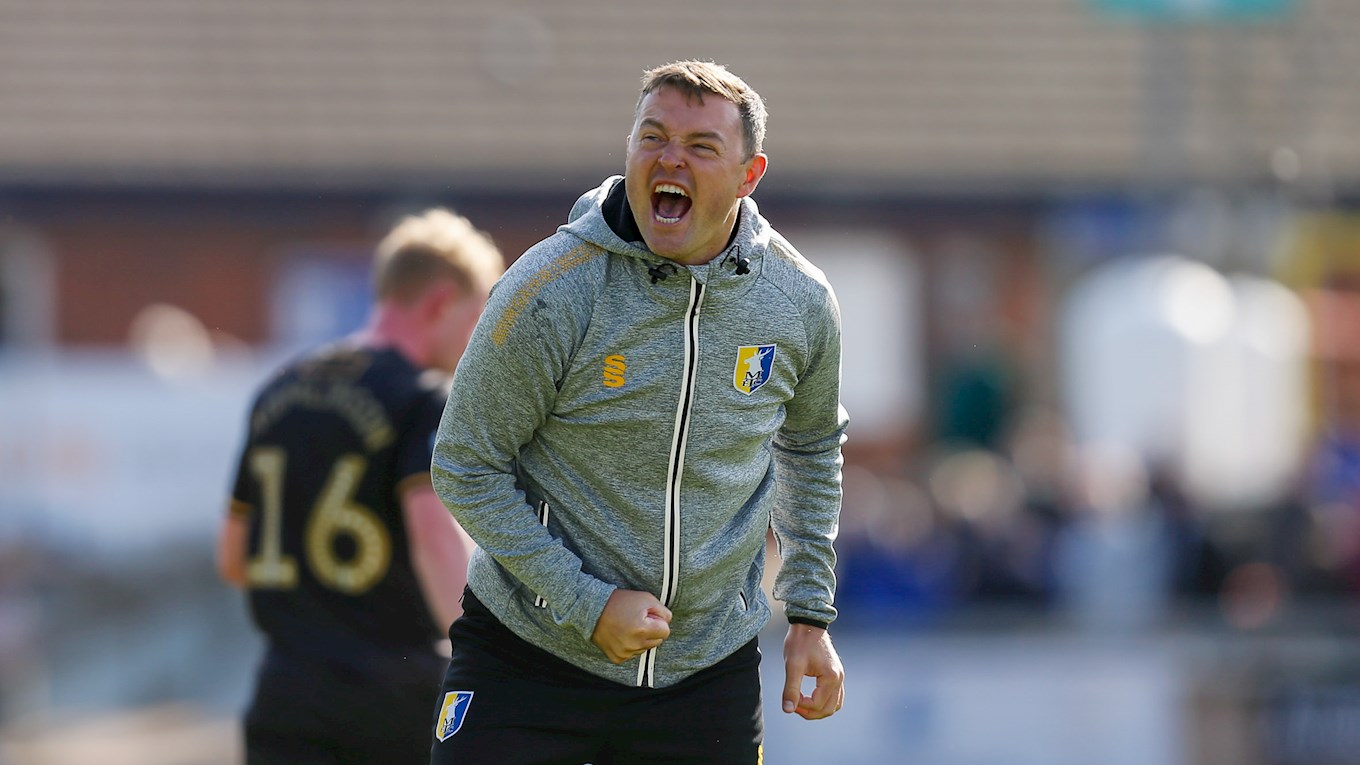 “We’ll be looking to put our game plan in place. We’ll respect them, of course, because they have lots of strengths, but we’ll be looking to exploit their weaknesses. We have the players within our squad to do that.

“Carlisle play a different formation to Leyton Orient so the spaces on the pitch will be different. If we feel that we can expose some of their weakness by changing personnel, that’s something we’ll do as well.

“If you look at the fixtures we’ve had – Newport away, Morecambe at home and Carlisle away – your [expected] points total would probably be in and around what we’ve picked up.

“We were disappointed to go out of the Carabao Cup on penalties but in terms of a points return [in the league], I think it’s quite a good one. And we’ll be looking to add to that on Tuesday [Leyton Orient at home] and Saturday [Stevenage at home].

“We got our first three points on Saturday against Carlisle and we’ll be looking to add to that as quickly as possible.

“Whether we’re home or away, we always feel like we can win a football match. I think most of the League Two sides would say the same – on their day anyone can beat anyone in the league.

“We look good going forward and some of the defensive displays on Saturday were outstanding. If we can get a little bit of consistency with that, we’ll certainly be a match for anyone.”

On Saturday, John Dempster recorded his first win as Stags’ boss, which he says was an ‘amazing feeling.’

“It was a brilliant win and performance [against Carlisle]. Carlisle away is one of the more challenging fixtures and it’s proven to be that for a lot of League Two sides.

“To go there and play like we did, it was an outstanding performance. It was an amazing feeling [to win the game]. You hear managers saying don’t get too high when you win, but I have to be honest, I was absolutely buzzing.

“It was a brilliant period after the game for the supporters to celebrate and also for the players to go over and show their appreciation for the journey that the fans had made.

“It’s only one win, but it was a brilliant one. I’m glad the supporters could enjoy that winning feeling. That’s something you’re in this business for.

Another positive from the clash at Brunton Park was the League debut handed to 20-year-old midfielder Alistair Smith (below), someone the boss says is an example of ‘working hard and achieving your potential.’ 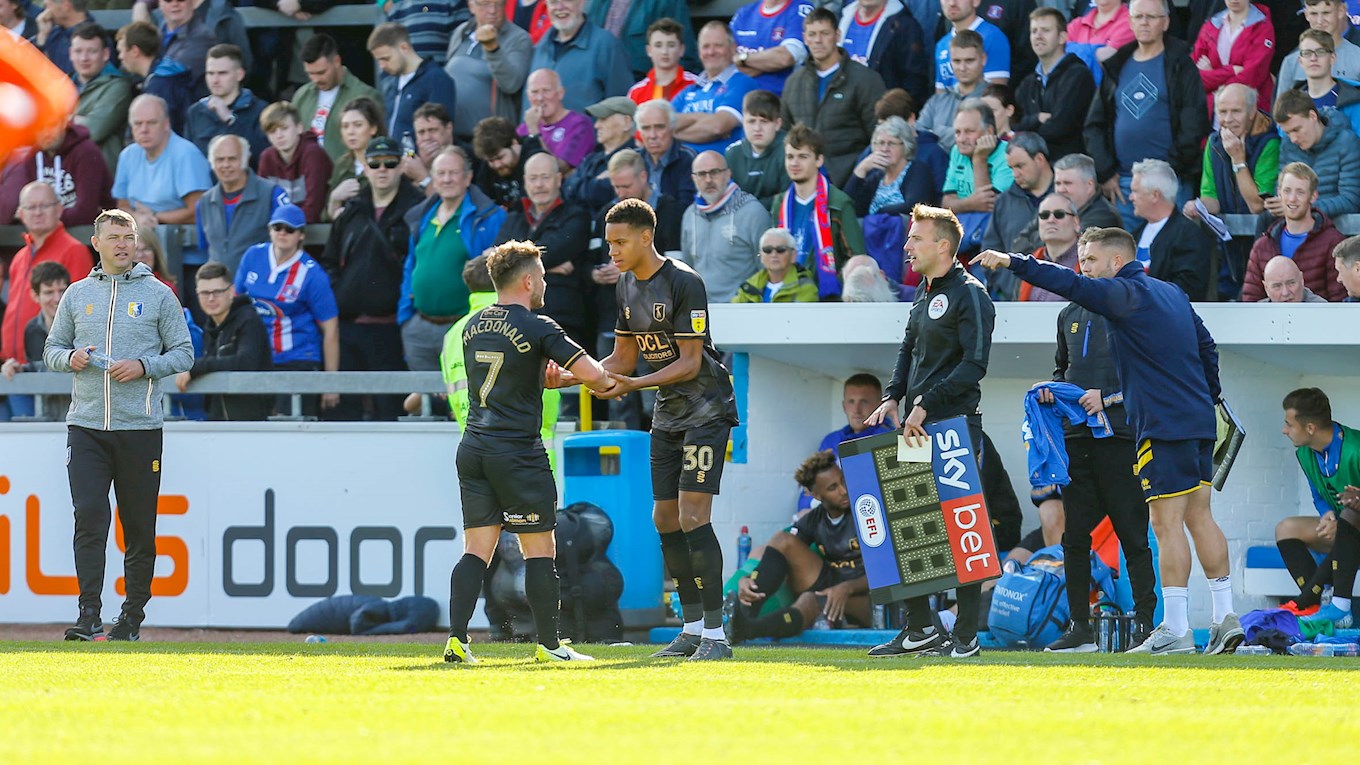 “I was immersed in the game [on Saturday] and was having discussions with Lee Glover [assistant manager] on who we could use to affect the game.

“Alistair [Smith] is somebody we thought we could bring on because he has good height and good legs.

“The thought process of him making his League debut didn’t really come into my consideration. It was about using a player at that moment in time that could benefit the team.

“I spoke to him about his responsibilities and it suddenly hit me that it was his League debut – it was the first time that I’d seen him look nervous in the four years that I’ve known him!

“He went on and did a good job for the team. It was a brilliant for him to make his League debut as a young player.

“It sends a wave of positivity all the way down the younger age groups when they can see that there is a pathway. If you are committed and produce the goods, you can be successful.

“Alistair is an example of that. It’s about working hard and achieving your potential as a young player.” 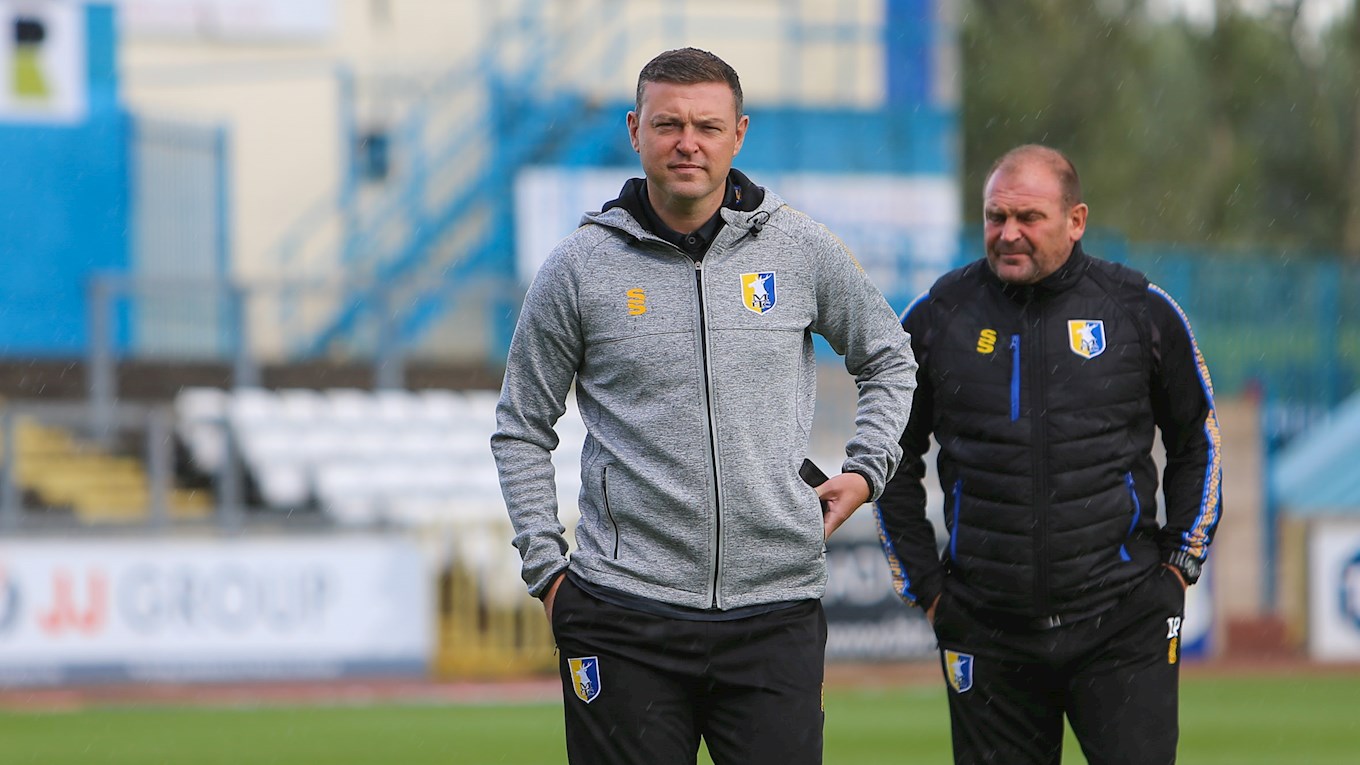 The manager also provided an injury update ahead of Tuesday evening’s match with Leyton Orient, revealing that midfielder Neal Bishop will require a fitness test before the clash at One Call Stadium.

“Bish has got a bit of a swollen Achilles, but we’ll probably run a fitness test on him before the game tomorrow. So we’ll know more on that tomorrow.

“Other than that, it’s just a few aches and pains that you’d expect from a Monday morning [after a Saturday game].

“Bobby [Olejnik] has been doing full goalkeeper training with Ian Pledger [goalkeeper coach], which is great to see.

“The only thing we’ve held him back on is full contact training. He’s diving around and doing a lot of handling which is great to see.

“Davo [Craig Davies] is running now out on the grass. There’s not a lot of directional change on his ankles but the medical team have been pleased with his progress.”