Manager John Dempster has called for his players to ‘fight for every inch’ in this weekend’s Sky Bet League Two clash against in-form Carlisle United.

Although the Stags are unbeaten in the league this term, the boss expects performance levels to rise on matchdays, with the amber and blue drawing both of their Sky Bet League Two outings thus far.

The manager says that his charges were ‘very disappointed’ after Tuesday night's Carabao Cup exit to Morecambe, but added that the players have returned to training in ‘high spirits’ this week.

He added that the Stags will have to be 'at their very best' to get a result against a Carlisle side that recorded an emphatic 3-0 victory away to Championship side Barnsley in midweek.

“The players and I were very disappointed [after loss to Morecambe on penalties],” the boss told iFollow Stags. “The effort was there, but when you have that amount of time to break down ten men, we wanted to be more efficient.

“To concede two goals again was very disappointing. There will be a discussion before training [today], but talk is cheap, so we need to put things in action.

“Carlisle are in good form and they had an excellent result against Barnsley in midweek. Steven Pressley has changed quite a lot there and he was a player I admired.

“He’s changed the way Carlisle play and the personnel from last season. We know we’ll be going there and it will be a very tough challenge, which it always is when you go to Carlisle. We need to be at our very best to go there and get anything.

“A number of players performed well [on Tuesday] and that’s at the front of my thoughts. We’ll get another good training session into the players today, which will also be taken into consideration.

“We want a competitive environment on a day-to-day basis. Players want to see the light at the end of the tunnel, that if they are performing there is an opportunity for them.

“Carlisle is a very difficult place to go. The players were very disappointed after the [Morecambe] game in midweek, but have come back in very good spirits thus far.

“As soon as our [training] session starts this morning, I expect people to be fighting for every inch.

“Standards have been at a good level in training and that needs to be taken into games more so.

“This squad of players need to prove themselves. We need to come together and scrap and fight for those inches and those points.

“We need to fight for every inch first and foremost and then the talent will come through. It’s a tough and physical league, so if you get those basics right and have a talented squad, nine times out of ten you’ll come through on top.”

John Dempster says his side must improve on the ‘basics’ and ‘tighten up’ defensively after shipping two goals in each game so far.

“It [improvement] is about doing the very basics right,” he added. “We’ve fallen short on the basics, which has been frustrating, as you can imagine for a manager or coach.

“It’ll be about tightening up in open play defensively. It will be about being better at set plays, for and against.

“But also it’ll be about emphasising some of the good play that we’ve had. We’ve scored two in every game so far, so without stating the obvious, if we can tighten up that defensive side of the game, we’ll be okay.

“We need to start picking up clean sheets, there’s no point dancing around it. We know that whatever side we pick, they are capable of going out and keeping clean sheets.”

The boss spoke about midfielder Dion Donohue, who was substituted at half-time on Tuesday evening, while also speaking of the quality in Stags’ youth ranks – in particular 20-year-old Alistair Smith (below), who completed 90 minutes in midweek. 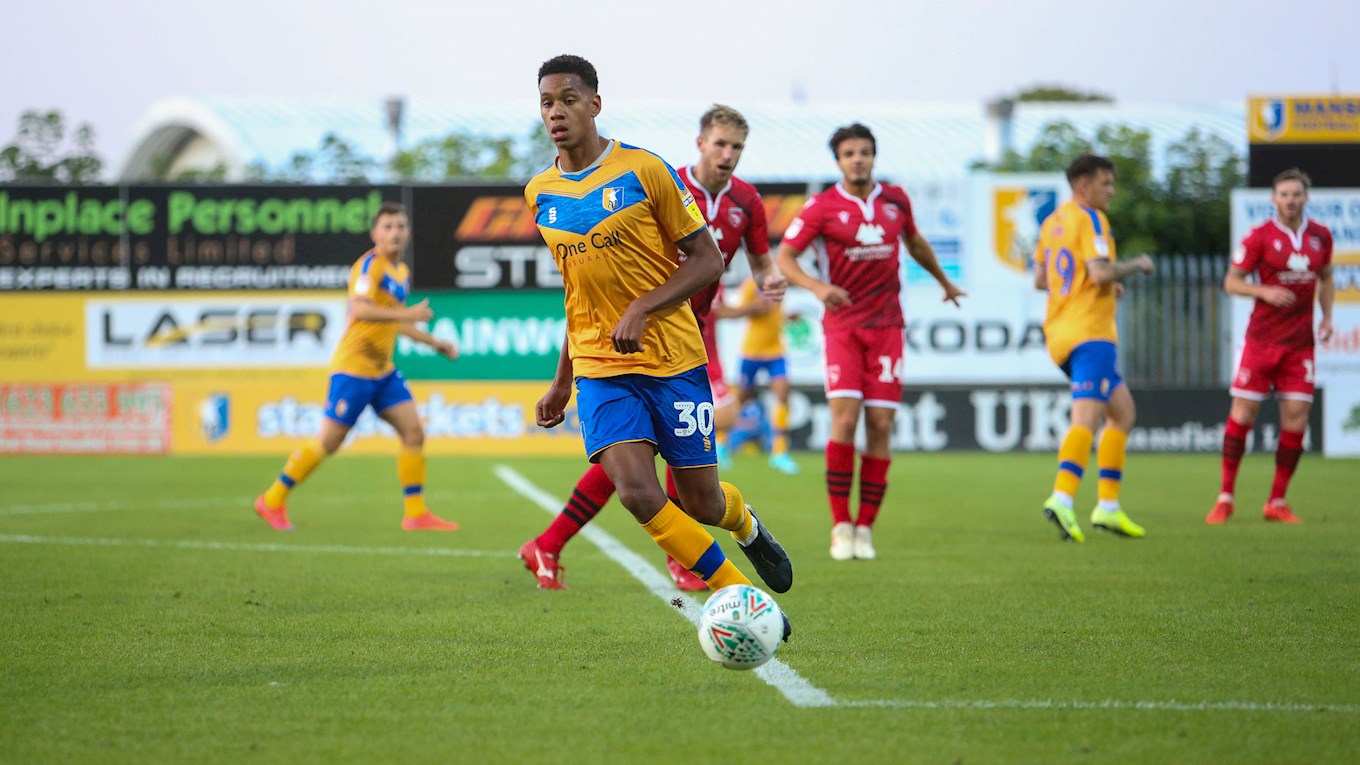 “Before the game, it was always the plan to see how Dion went. He hasn’t had a lot of football over the last year, so we wanted safety first.

“He got a little bit of tightness in his body, so we wanted to be careful with him. Tactically, we were looking to play him for longer, but as soon as he mentioned the tightness, we took him off.

“I think you can see that he’s a talented footballer who is very good on the ball. He’s somebody that will be important to us.

“We spoke about Alistair Smith after the game in midweek and we were very pleased with his performance. We have some other talented boys who have their foot in the door and are training with the first team every day.

“The long-term vision of the club is to have those players involved and have them in the team. I’m a manager that shares the vision of the football club and it’s something I’m passionate about.”

iFollow Stags can watch the manager’s interview in full by logging into mansfieldtown.net/ifollow later today.