Stags’ boss John Dempster was pleased with the number of opportunities his side created in this afternoon’s 0-0 draw against Stevenage, but says that the lack of a clinical edge in front of goal was the difference between one point and three.

The amber and blue crafted a number of chances, especially in the second-half, in which striker Danny Rose was denied by a fine Paul Farman save and midfielder Alex MacDonald saw his effort blocked on the line by Luther Wildin.

The manager says that the Stags can ‘build’ on the clean sheet they earned this afternoon.

“It’s the first time we’ve fallen short at that [attacking] end of the pitch,” he said. “We’ve been very clinical this season.

“The players put a shift in today. I thought James Clarke (pictured below) did well on his full debut and it was great to see Jimmy Knowles come on and make his league debut as well. “We’re thin on the ground with numbers but I thought that the young lads who appeared today did themselves proud.

“Krystian Pearce and Kellan Gordon did a fitness test at midday today and both failed. Then we had to put a plan together around that – it’s been really frustrating the amount of injuries we’ve picked up.

“The majority of the injuries have been impact ones and there’s not a lot you can do about them.

“The boys’ fitness levels are good. Some of the players are hitting their personal bests in games – [Alex] MacDonald (below) did it in midweek and [Ryan] Sweeney did it against Morecambe. 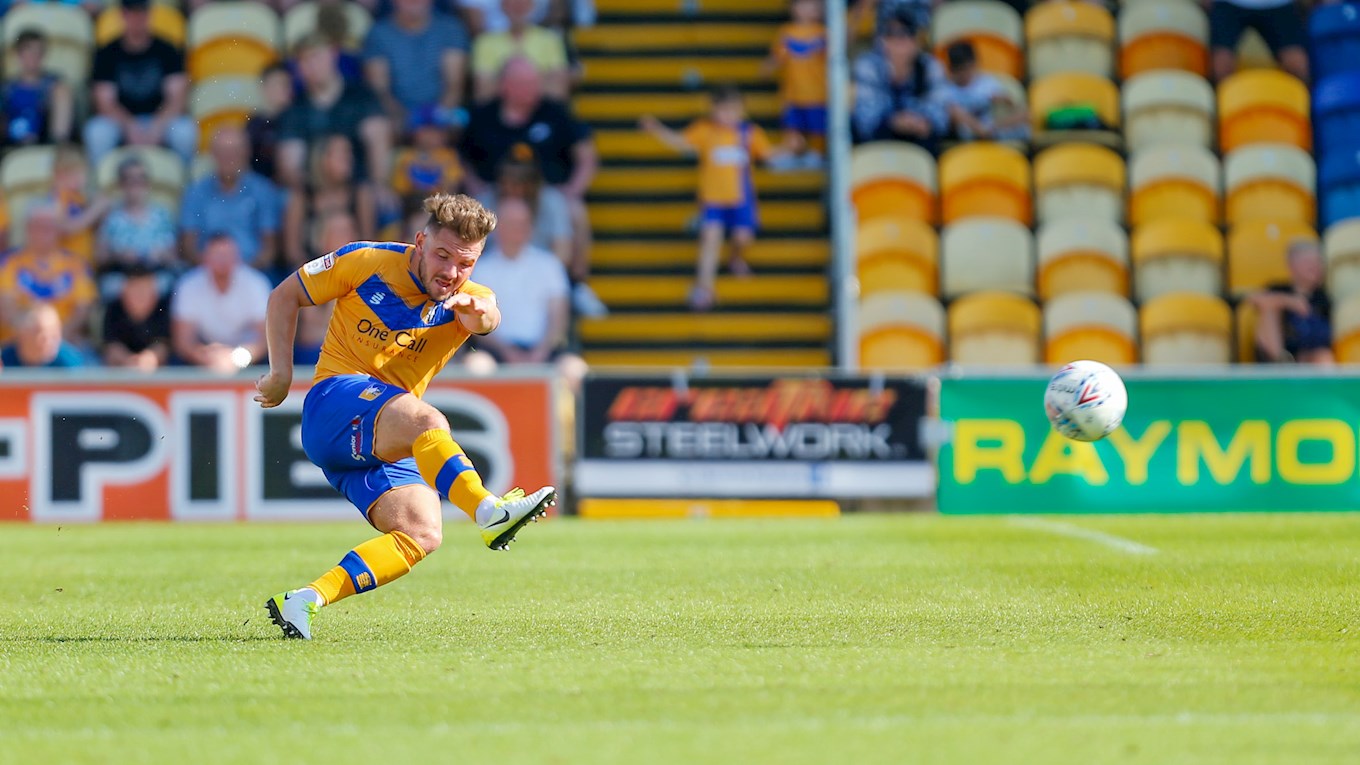 “We were doing some work on the back three in training yesterday when KP [Krystian Pearce] picked up his injury. He went in for a block tackle and it opened his ankle up a little bit. He did everything he could to make himself available.

“He made the call that he wouldn’t have been right to play and he put the team first, which is what you expect from your captain.

“When you keep a clean sheet you only need [one] chance to go in. Conrad [Logan] didn’t have too much to do.

“If you get a clean sheet you can build on it. We haven’t played many games and there’s a long way to go.”

The manager spoke highly of the performance of James Clarke, who made his full league debut this afternoon.

He was also full of praise for striker Jimmy Knowles, who made his first EFL appearance as a late substitute.

“I thought he [James Clarke] did really well. When you’re at a club of this size and the supporters are willing you to win, that comes with pressure.

“I thought Clarkey dealt with that really well and the supporters were excellent getting around him with shouts of encouragement.

“That’s what a young player needs when making his debut or featuring at any point, they need encouragement. I thought the supporters gave that to the younger players today.

“It was good to see Jimmy [Knowles] feature. He’s a cracking lad and a local lad who I have a lot of time for. I think he has a bright future in the game.

“I could’ve possibly got him on earlier, but we were creating opportunities. We’re disappointed not to get all three points.

The boss also looked ahead to Tuesday evening’s Leasing.com Trophy clash against Everton under-21s at One Call Stadium, a game he says that Mansfield’s under-21 players may be prominent in.

“We are looking to bring in some bodies and some reinforcements to help the group. If we can get those in quickly they could feature on Tuesday.

“But as you’ve seen today we’ve got some good under-21 players who might need to step up on Tuesday in particular.”

iFollow Stags subscribers can watch the defender's interview in full by logging into mansfieldtown.net/ifollow later today.

To purchase tickets for Tuesday night's game against Everton under-21s, head to stagstickets.co.uk.