Stags’ under-18s were narrowly beaten 3-2 against Hartlepool United under-18s in their first competitive game at the impressive new RH Academy.

Saturday’s Youth Alliance league match between the two sides ended in frustration for the Stags, who had taken a first half lead when right-back Larrell King netted for the home side. However, an immediate equaliser from Josh Scott levelled the score, before Bradley Fox gave the visitors the lead midway through the second half.

On a windy afternoon at the RH Academy, Rhys Sarson smashed home an equaliser for Mansfield. With both teams going in search of victory late in the game, it would eventually be the away side who grabbed a 90th minute winner through Fox, for his second of the afternoon, giving Hartlepool all three points.

John Dempster will likely be delighted that his side continue to be a threat in front of goal, having found the net 12 times in their last five fixtures.

James Tague was the only change from the Stags’ starting XI that beat Grimsby Town 2-1 last Saturday, with Riley O’Sullivan his replacement.

Stags began the first half playing into the wind, with the gusty conditions forcing both sides to make adjustments to their passing style as the aerial ball was largely unpredictable.

Tyrese Sinclair showed terrific acceleration down the right as he beat his man round the outside. Then, cutting back inside onto his left as a covering defender came across, he squared the ball back towards the penalty spot for Jimmy Knowles, who was just beaten to the ball by a Hartlepool defender who smashed his clearance upfield.

Then, O’Sullivan got in behind the defence down the left-hand side, after Sarson had played a neat reverse ball over the top. A burst of acceleration from the Stags’ number 11 saw him momentarily get away from his marker, however a brilliant last-ditch sliding tackle from Jack Naylor prevented the Stags’ forward from being clean through on goal.

In the 25th minute, the visitors produced a threatening attack as Connor Rennison found space on the left wing and whipped in a delicious, in-singing ball from the touchline. With the wind catching the ball, it sailed over everyone, and luckily went just wide of Warren Squires’ far post.

Just under the half-hour mark, Larrell King got forward from right-back and played the ball into Knowles who was positioned in the right-hand corner of the opposition’s area. King continued his run into the box, as Knowles spotted his teammate and played a perfectly weighted ball directly into his path.

King – known more for his defensive work than for his goals so far this season – struck the ball sweetly first time, only for an opposition defender to block the attempt. However, the right-back was first to react as he pounced on the rebound and with the composure of a seasoned centre forward he swept the ball into the back the net to give the home side a 1-0 lead - scoring the first goal at the new venue.

Stags had taken a deserved lead, but unfortunately, their advantage would last just two minutes. A strike from distance by Luca Murphy was tipped onto the crossbar by Squires, with the rebound falling kindly into the path of Josh Scott, who was able to tuck the ball home to peg Mansfield back.

It took just 30 seconds after the restart for O’Sullivan to once again get in behind the Hartlepool back-line. The Stags’ forward burst down the left-hand side, and his cut-back found Knowles in space on the edge of the area. Knowles took a touch, worked a shooting opportunity and fired a right-footed effort towards goal, only for it to be charged down by a well-positioned defender.

Seconds later, Sinclair was brought down on the edge of the penalty area. He lined up the free-kick, but with the position of the kick almost too close to the goal, the forward struggled to get the ball over the wall and down in time, as his effort whistled over the top of the crossbar.

In the 55th minute, Liam Pritchard showed a neat bit of skill down the left-hand side, ghosting past his marker before pulling the ball back to the penalty spot from the byline. With attacking players poised and waiting to pounce, Jamie Chisholm, who had taken up a superb defensive position, used an outstretched leg to brilliantly toe the ball away to safety.

With 20 minutes remaining and the scoreline still level, Bradley Fox broke free of the Stags’ backline, accelerated towards goal with the ball at his feet and calmly slotted the ball past Squires in the Mansfield goal, giving the away side the lead.

Stags once again began to ramp up the pressure. Knowles collected a loose ball just inside the Hartlepool area, and this season’s academy top scorer smashed a right-footed attempt towards goal. With the keeper beaten all-ends up, the ball cannoned back off the top of the crossbar and away to safety as Knowles clutched his head in his hands.

Moments later, following a Stags’ corner, a melee in the box ended with the ball somehow narrowly evading the outside of Brad Young’s far post, and out for a goal-kick. The Stags continued to apply the pressure as they searched for an equalising goal.

With 76 minutes gone, Knowles pressurised Harrison Webster in the Hartlepool defence, winning the ball back high-up the field before feeding his strike partner Sarson on the edge of the area. Sarson did the rest as he took one touch before hammering a right-footed effort in at the goalkeepers’ near post, levelling the score.

With half-chances falling to either side late on, the games defining moment would come in the 90th minute.

Fox found himself with a yard of space on the right-hand corner of the Stags’ penalty area. When it looked as though there was little on for the Hartlepool number 10, he bent a right footed effort, curling in towards Squires’ far post. Whether the striker meant it or not, his effort looped over the head of Squires in the Mansfield goal and dropped into the corner of the net at the back post.

With the goal being scored so late on, there was little time for the Stags to reply. Ultimately, the referee brought the game to an end, meaning Mansfield didn’t get off to the start they would have hoped for in their first game at the new RH Academy.


The new year belatedly begins for Mansfield Town under-18s on Tuesday afternoon when Burton Albion travel to the RH Academy.


Mansfield Town under-18s kick off the new year on Saturday morning when they welcome Rotherham United to The RH Academy in the EFL Youth Alliance. 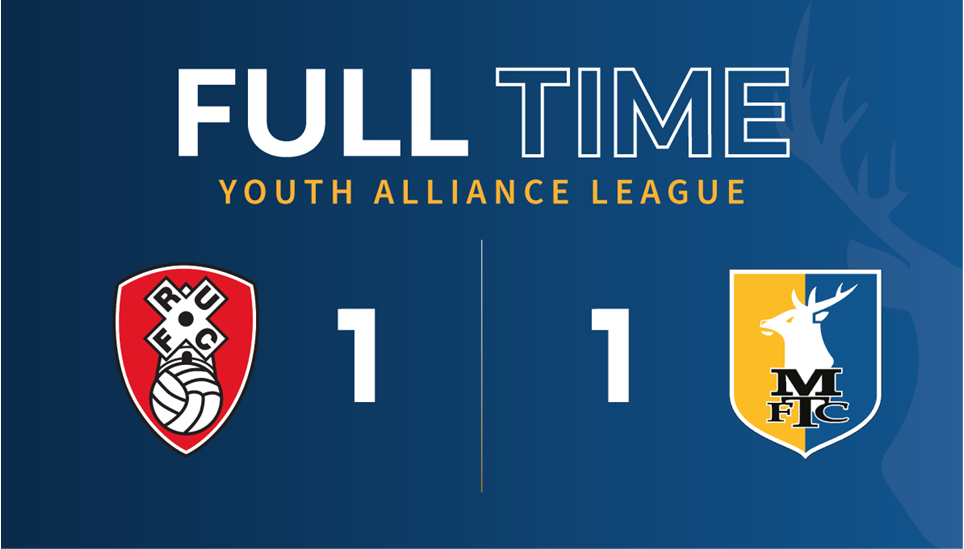 
Mansfield Town under-18s battled for a 1-1 draw away at Rotherham United in difficult conditions on Friday morning. 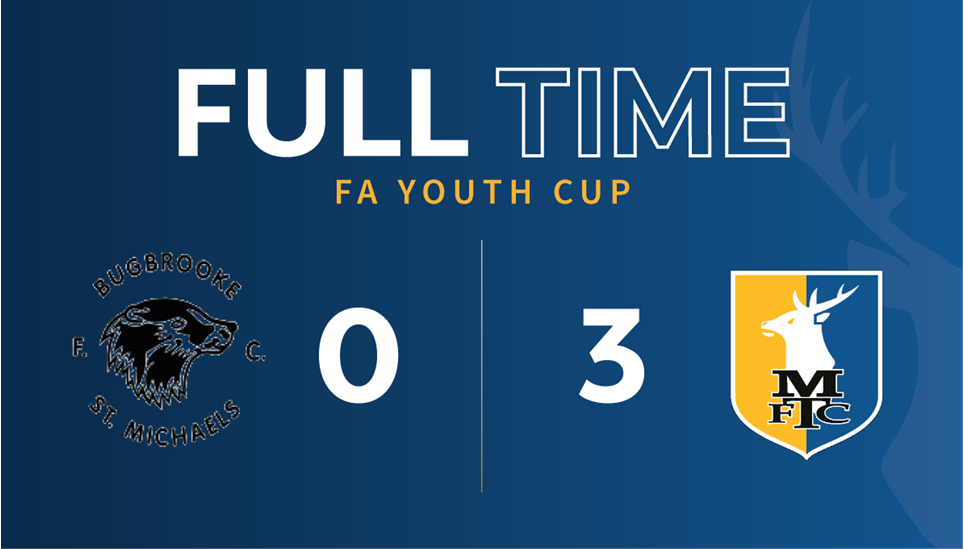 
A professional performance away in Northamptonshire saw Mansfield’s under-18s progress to the second round of the FA Youth Cup after running out 3-0 winners in a fiery contest against Bugbrooke St....


Mansfield Town exited the Emirates FA Cup after a 2-1 defeat to Cheltenham Town on Sunday afternoon. 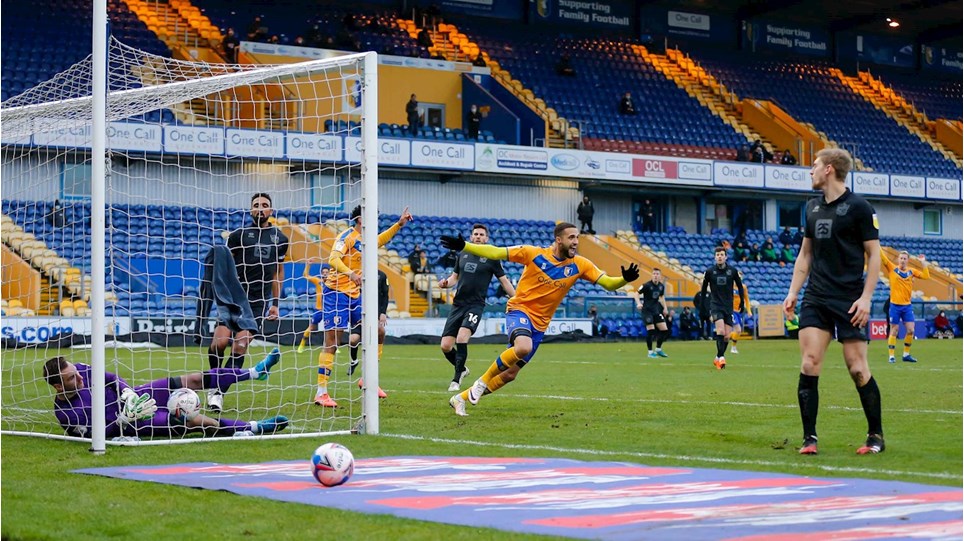 
Jordan Bowery’s classy hat-trick fired Mansfield Town to a dominant 4-0 victory over Port Vale at One Call Stadium in their first game of the New Year.