With drama in the dying embers, Mansfield Town secured top-spot in Group H after they ran out as 3-2 victors over Scunthorpe United in the Checkatrade Trophy.

After taking a two-goal lead courtesy of goals from youngster Nyle Blake and Calum Butcher, the Stags looked to be heading for a draw when the visitors momentarily turned the game on its head.

The duo of Yasin Ben El-Mhanni and Andy Dales levelled up affairs heading into the final minute of normal time – before Timi Elsnik looped the ball into the net to give his side nine points from nine in the Checkatrade group stages.

There were wholesale changes for the Stags' final group stage outing in the Checkatrade Trophy, as David Flitcroft named a youthful starting line-up.

It included the likes of Blake, Jason Law and Alistair Smith alongside more senior figures as the Yellows searched for victory under the floodlights.

It was nothing more than a quiet start to affairs at One Call Stadium, epitomised when Danny Rose ballooned the ball wide from distance.

The first half-chance then looked to fall to Kyle Wootton in the fifth minute but the striker couldn’t get any connection on the teasing cross.

Law, just one of the handful of youngsters on display tonight, looked to deliver a ball into the middle that was eventually plucked out the air by Scunthorpe ‘keeper, Jon Flatt.

Elsnik then burst a sea of red moments to strike what could have been a vicious effort against the legs of Lewis Butroid.

The visitors were next to test their opposing back-line and should have been ahead.

Conrad Logan was forced into a smart save before Lewis Gibbens denied Wootton the chance to slot home the rebound with a vital interception.

The back-and-forth nature to this Group H clash continued when Law nipped in. He took possession from Jordan Graham and won his side a corner that the hosts couldn’t take advantage of.

Clayton Lewis almost gave his side the lead with a clever near post free-kick; but would come to rue Logan’s reactionary save when the Stags surged upfield.

Blake marked his full first team debut with a goal when his finessed effort from 20 yards took a wicked deflection, wrong-footing Flatt, and bounced beyond the goal-line.

Logan, called into action for the second time, made another expert save. This time from Funso Ojo as he sought the equaliser from just outside the box.

Wootton then managed to out-jump Law at the back post before looking to nod the ball across the face of goal. Luckily for Flitcroft’s side, nobody in a red shirt had gambled.

Less than a minute into the second half, Scunthorpe signalled their intent through Chris Dales as he struck an effort that crashed against the bar.

Logan then tipped over El-Mhanni’s attempt from a similar position to stop the Iron levelling up.

And Logan’s save was made to look even more crucial in the 53rd minute.

Butcher found himself in a pocket of space inside Flatt’s 18-yard-box, taking a delicate touch before rolling the ball beyond the ‘keeper from close-range.

The second goal of the evening seemed to liven up the hosts even further as they pressed at every given opportunity.

Will Atkinson fired an expert cross parallel to the six-yard box, only to see it fly all the way through past a heap of bodies.

Rose then got the better of Butroid down the right-flank but could only watch his strike ricochet against the shins of Flatt.

And the Stags striker almost found himself on the scoresheet when he looked to have rolled the Scunthorpe centre-half – only to see it blocked at the last moment.

The visitors though, to their credit, weren’t to be disheartened by the latest flurry of Mansfield attacks.

El-Mhanni halved the deficit at One Call Stadium with a deflected strike of his own on 73 minutes.

The nimble midfielder danced through before his shot took a hefty deflection, ensuring Logan would be unable to recover in time.

And Scunthorpe were able to level up proceedings in the 89th minute via Dales.

After he’d initially struck the crossbar in the first minute of the half, his persistence was rewarded when he placed the ball beyond Logan with a neat finish.

But there was to be another twist in the tale at One Call Stadium.

Immediately after being pegged back, Elsnik had other ideas. The midfielder found himself through on goal, before making no mistake in finding the back of the net in the 90th minute.

Substitute Tom Pugh stretched to hook the ball away, but could only send it further into the goal as all three points were with the Stags this evening.

The Iron pressed for their second equaliser of the night but it was not to be as Elsnik’s finish eventually secured the win.

After a frantic finish, Flitcroft’s side will now turn their attentions back to Sky Bet League Two when they take on Port Vale at One Call Stadium this forthcoming Saturday.


Mansfield Town's under-18s cruised to their first win of the season with a 4-0 victory away at Doncaster Rovers on Saturday.


A difficult afternoon meant an impressive horde of travelling Stags’ fans saw their side beaten by Walsall at Banks’s Stadium.


The Stags made an impressive start to the Premier League Cup group stage with a 3-0 win at home to Sunderland U23. 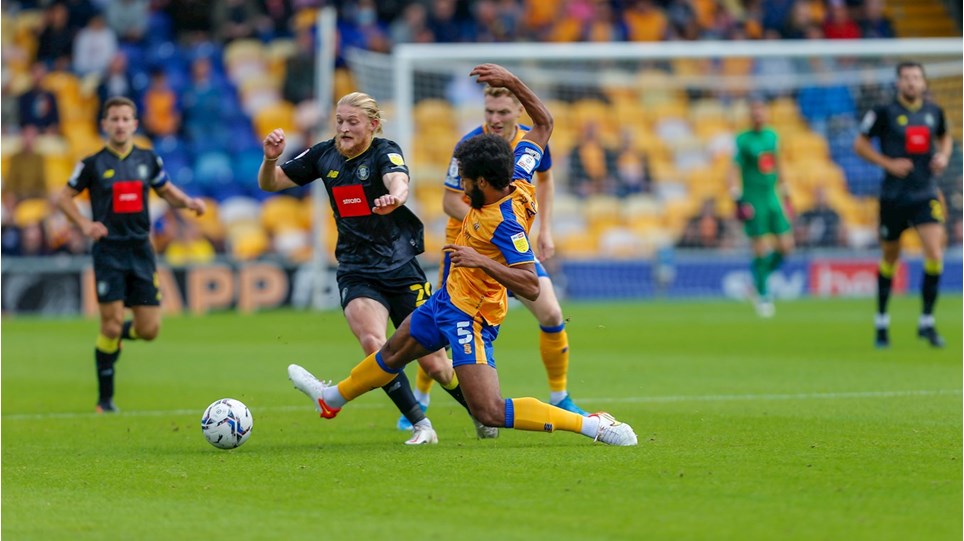 
Nine-man Mansfield Town were beaten 3-1 by Harrogate Town at One Call Stadium on Saturday afternoon.