Ice cool Kane Hemmings kept his nerve to rescue a point for Mansfield Town this afternoon as he dispatched a penalty nine minutes into second half stoppage time of a fiercely competitive 1-1 draw against Notts County.

It was a bitterly cold day in Nottingham as frequent blizzards engulfed Meadow Lane, making supporters cold and the prospect of free-flowing football difficult.

Stags headed into the half-time interval behind as County edged a tight opening 45 minutes. The two promotion rivals had traded blows for the first half hour but in the 33rd minute, Notts County went ahead. A corner in from the right resulted in the experienced Shola Ameobi seeing a header tipped onto the bar by Stags’ ‘keeper Conrad Logan which resulted in a goal mouth scramble that ended in Terry Hawkridge forcing the ball over the line from close range.

The Stags had the better of the second half with County attempting to wind the clock down and maintain their advantage. Mansfield enjoyed some strong late pressure and striker Danny Rose curled a shot just wide of the post before County ‘keeper Adam Collin had to be at his best to keep out midfielder Alex MacDonald’s header. Stags were throwing everything at their opponents and with a minimum of seven minutes added on, County were well and truly on the back foot.

In the last minute of the added seven, Lewis Alessandra was adjudged to have handled the ball inside the County area and Hemmings stepped up, under huge pressure, to send the ball past Collin to secure a share of the points.

For only his third game in charge, Mansfield manager David Flitcroft made a trio of changes to the side that drew with Colchester United last time out. Club captain Zander Diamond missed out after picking up an injury in that draw and he was replaced by fellow defender Rhys Bennett, who returned from suspension. Midfielder Will Atkinson came in for Hayden White with Paul Anderson moving to right back, whilst Adam King returned to the heart of midfield with Joel Byrom dropping to the bench. Byrom was joined amongst the subs by returning attackers Omari Sterling-James and Ricky Miller.

Not only were there valuable points and local bragging rights at stake, but the two teams were also competing for the Matt Salmon Trophy, named after the beloved physio who spent time at Notts County before becoming Mansfield’s academy physio. The 25-year-old tragically lost his battle with cancer last year and County were looking to win the trophy after Mansfield claimed it following their 3-1 victory in the reverse fixture.

The first chance of the game went to the hosts and the experienced striker Jon Stead. A diagonal ball into the Mansfield area found the former Sunderland man but his diving header was comfortably wide of the Stags’ goal.

It was the Magpies who had the game’s next chance in the 10th minute. Stags’ ‘keeper Conrad Logan punched a ball to the edge of his area and County midfielder Liam Noble was quickest to the loose ball but his attempted lob landed on the roof of the net.

Mansfield’s first opportunity came in the 14th minute. Good pressure on the edge of the County area ended in striker Kane Hemmings turning his man and seeing a powerful effort deflect wide for a corner. That resulting corner, taken by Alex MacDonald, caused havoc in the Magpies’ 18 yard box but the home side eventually managed to clear the danger.

The game was being played in terrible, wintery conditions and the swirling wind combined with the downpouring of snow, which had covered the Meadow Lane pitch, made it very difficult for either team to find any sort of rhythm.

In the 25th minute, Mansfield went agonisingly close to going ahead. Hemmings did brilliantly to hold the ball up and he found MacDonald inside the area. The former Scotland under 21 international tried to play the ball across to top scorer Danny Rose but the pass was intercepted at the last second by County defender Ben Hall.

Rose was involved again in the 32nd minute as he had the game’s first shot on target. Receiving the ball on the edge of the box, the former Bury man shifted the ball onto his left foot but saw a low effort collected by Magpies’ ‘keeper Adam Collin.

County then had their first effort on goal and from it, they should have taken the lead. County took advantage of a Mansfield defence which had momentarily lost its shape and Jorge Grant’s ball from the left found Shola Ameobi waiting but after taking a touch, the former Newcastle United forward saw his effort denied superbly by the legs of Logan.

That led to a County corner and from that set piece, the home side did take the lead. After being found by the ball in, Ameobi saw his header tipped onto the bar by Logan but when the ball looped up in the six yard box, County’s Terry Hawkridge climbed highest to head in the rebound.

The Stags almost got a quick reply as full-back Paul Anderson bombed down the right flank and delivered a brilliant ball in towards Hemmings but with the on-loan Oxford United man waiting to head home, County captain Richard Duffy managed to get a touch on the cross to deflect the ball to safety.

That meant it was Notts County who went into half-time with the lead as the Stags faced a big 45 minutes in this crucial game in the race for promotion out of Sky Bet League Two.

Early in the second half, things nearly went from bad to worse for Stags as County’s former Premier League front two linked up well. Ameobi headed the ball onto Stead inside the area but Mansfield forward Danny Rose was on hand to bravely intercept and force a corner.

In the 56th minute, a superb Mansfield counter-attack almost produced an equaliser. Hemmings did brilliantly on half way to outmuscle a County defender and he then charged into the area before seeing a shot tipped into the side-netting by Collin.

Just before the hour, the Stags went close again. Pacey winger CJ Hamilton got down the left and saw his pull back deflect out to Paul Anderson but the former Liverpool youngster saw his first time effort from 20 yards swerve just wide of the County upright.

Stags’ gaffer David Flitcroft made a bold attacking change in the 61st minute to try and get his side back into the game. Midfielder Adam King was replaced by forward Lee Angol with Mansfield seemingly reverting to a more attacking 4-4-2 formation, with Kane Hemmings moving to the right wing.

The game then entered a bit of a lull but sparked back into life in the 70th minute when MacDonald burst past his man on the edge of the County area before seeing a well-struck effort deflect through into the grateful hands of Adam Collin.

It was a bitterly cold afternoon but things soon heated up when several Notts County players over-reacted to a foul by Mansfield left back Mal Benning. Some pushing and shoving followed but referee Andy Woolmer kept his calm, only showing a yellow card to the Stags’ man.

Notts County appeared to be happy with what they had and as the game reached the closing stages, they were doing all they could to wind the clock down and frustrate the Stags.

With just under ten minutes to go, Mansfield nearly found their equaliser. Midfielder Will Atkinson did well to pick up a loose ball and he slipped it through to Rose who, from inside the area, cut inside on his right foot and curled a shot inches wide of the far post.

Cheered on by over 4,000 Stags’ supporters, the men in amber and blue were putting County under some serious late pressure with a number of balls into the box forcing the home side into a rear guard action.

The Stags’ fans were buoyed when fourth official Graham Salisbury indicated for a minimum of seven minutes added time at the end of the normal 90.

Mansfield’s second change came late on when Paul Digby was introduced in midfield to replace the injured Paul Anderson. Will Atkinson moved to right full back.

The late pressure by Mansfield continued and MacDonald forced Collin into a terrific diving save with a powerful, free header.

That led to another Stags’ corner and though the initial ball was cleared, MacDonald attempted to send the second ball back into the area but saw his attempted pass blocked by the hands of Notts County’s Lewis Alessandra. Referee Andy Woolmer was a matter of yards away and he quickly blew his whistle and pointed to the spot for a last minute Mansfield penalty.

Kane Hemmings was the man to step up under so much pressure but he kept his calm to fire under Collin and rescue a point for the Stags.

It’s now four successive 1-1 draws for Mansfield but given the jubilant scenes following Hemmings’ spot kick, it will feel like a win for David Flitcroft’s men who stay in touching distance of the automatic promotion places in Sky Bet League Two. 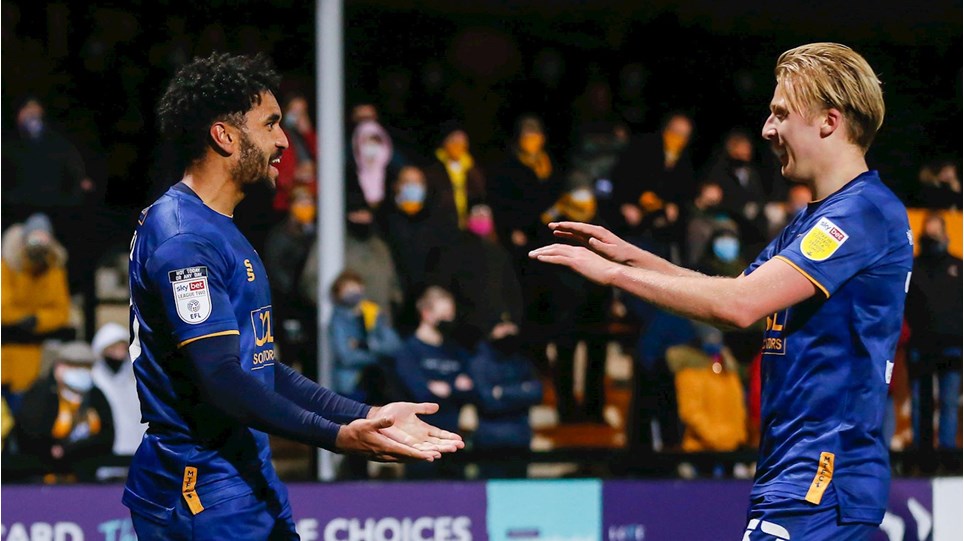 
Nicky Maynard climbed off the bench to send Mansfield Town into the next round of the Emirates FA Cup, following a pulsating 2-1 victory over Dagenham & Redbridge.


Stags’ under-18s battled hard in blustery conditions at The RH Academy, but it was visitors Grimsby who emerged victorious in Saturday’s Youth Alliance League fixture.