New signing Neal Bishop says the owners’ ambition and the manager’s magnetism were the major reasons he signed for the Stags.

The midfielder, who becomes manager David Flitcroft’s second summer signing following the acquisition of defender Matt Preston, has revealed that dialogues with chairman John Radford, CEO Carolyn Radford and the Stags’ boss made him feel ‘wanted,’ and says that he is joining a ‘club on the up’ in Mansfield Town.

“The manager had a good conversation with me and made me feel very wanted,” he said. “[He told me] his plans of how he wants to play, and how he wants to kick on from the disappointment of last season.

“The ambition of the owners made my mind up for me in the end. I’m delighted to sign and I’m glad it’s all been sorted. I can’t wait to get started.

“They [John and Carolyn Radford] are full of enthusiasm, they’re doing things the right way. They back the manager fully and I’m delighted to be here.

“I’ve been very fortunate in my time at Scunthorpe being high up in League One, trying to get into the Championship. But I wanted a fresh challenge and I think I’m ready for one.

“This [signing for Mansfield] is a great challenge. It’s a club on the up and it’s a club that’s looking to kick on. I just want to come here and help them do that.

“I have had other offers, and this one stood out. After a chat with the manager, it was fairly easy for me to make my decision.

“The manager has come in and has all of the summer to put his ideas across and implement his plans. It’s something I want to be a part of.

"This [signing for Mansfield] is a great challenge. It’s a club on the up and it’s a club that’s looking to kick on. I just want to come here and help them do that."

“There’s a positive vibe around this place and I haven’t come to mess around. We want to kick on and do something special next season.

“A fresh challenge really excites me. You want to go somewhere you feel you have a real chance of achieving something and I feel like this is a great fit for me.

“I’ve won one title and promotion, but that’s not enough for me. I’m highly ambitious. The last two seasons at Scunthorpe we’ve been beaten twice by the team who has eventually gone up in the play-offs and that’s disappointing. I have to use that disappointment to fire me [up] and go again.”

The 36-year-old has already experienced promotion from Sky Bet League Two first-hand with Notts County, and believes that the Stags have the infrastructure capable of a promotion charge in the upcoming campaign.

“I can promise everyone that as long as I am here, I will give it my everything. I’d like to think that anyone that has known me at Scunthorpe over the past few years will say that [I give everything],” he added. 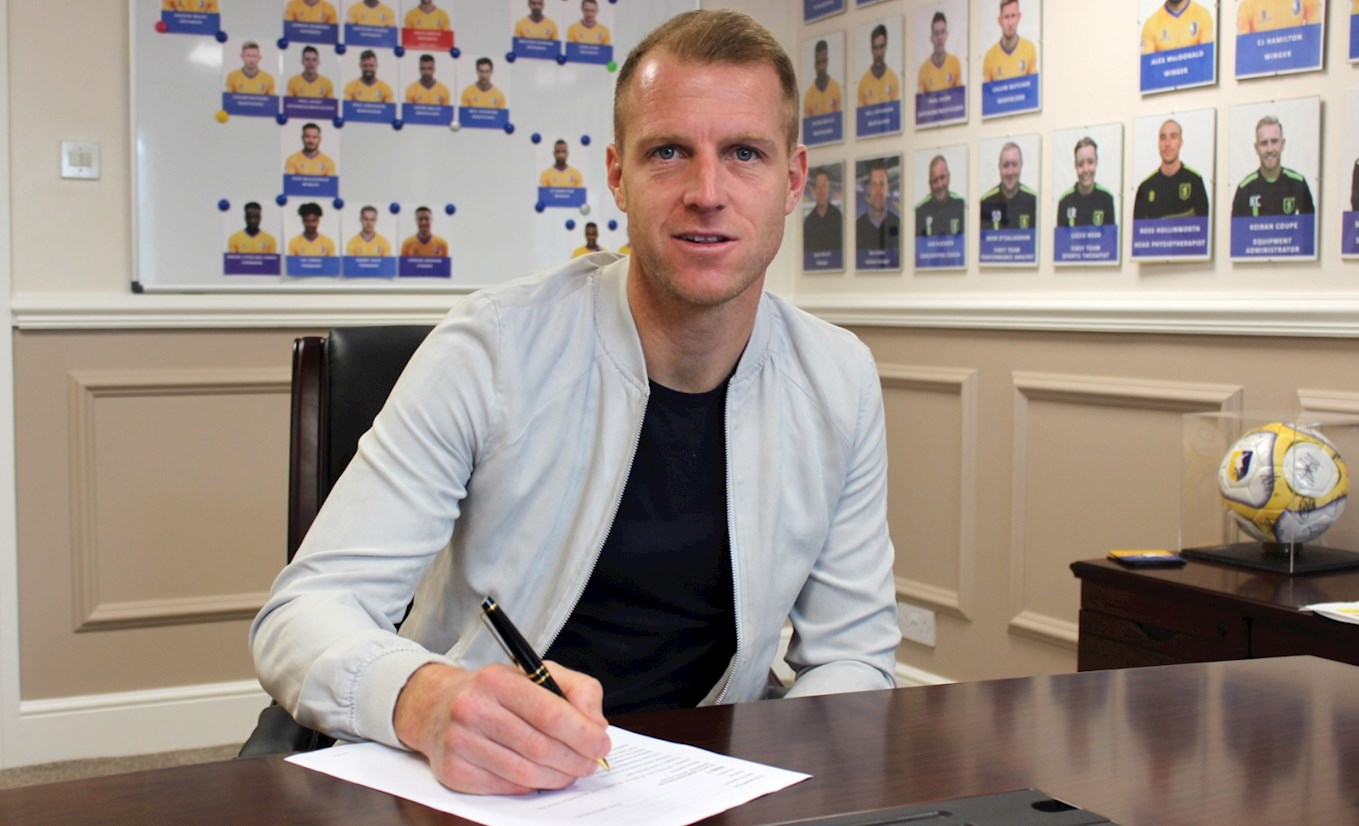 “It [success in League Two] takes a lot of effort from the club, the supporters, chairman and staff who all need to be on the same page and pull in the right direction.

“It can be a very long season. Mentally you need to see the long term goal. There’s no switching off. Any team can beat any team and it’s a long battle.

“If you can keep your eye on that prize then you can achieve something special, and that’s what we all want to do here.

“If you look at my playing record I’ve never played less than 35 games in a season for the past 15 years, so touch wood, I’ve been injury free and I feel really good.

“That’s where this club wants to be, we want promotion and I don’t think we should hide away from that. We have to go out every Saturday or Tuesday and prove we are the team capable of getting promotion.”

Bishop also believes he can add to the team off the pitch with his experience, and hopes that the Stags’ supporters can relate with the passion he plans to show in amber and blue.

“We have some really good pros here. I’m not going to come in and start telling people what to do but I always felt that I learned from the older pros.

“If people can look at me and learn something I’m adding to the club in that way as well.

“I want to get promoted. I want to score as many goals, get as many assists, make as many tackles. I want to play every game no matter what competition it’s in. That’s always been the way for me and it’s the only way I’ve ever known.

“At the end of the day we’re all supporters and I’m really privileged to be able to play professionally. Hopefully the supporters see a bit of themselves in me.”

iFollow Stags subscribers will soon be able to watch Neal’s answers in full by logging into mansfieldtown.net/ifollow.