Mansfield Town Football in the Community hosted the area finals of the EFL Girls Cup last week, a competition entered by schools nationwide.

After winning the local competition, Sutton Academy represented Mansfield Town and competed against six other clubs.

The seven clubs competed in a round robin competition in the morning, before the top four progressed to the afternoon session, where a strong Derby County side ultimately emerged as victors.

The EFL Girls Cup is for U13 girls which culminates in a grand final prior to the EFL Trophy Final at Wembley Stadium in March.

A six-a-side contest, the road to the finals begins when the new school term starts. Each of the 72 EFL clubs organises a local competition for all schools wishing to take part in their area.

The winners of that competition then go on to represent the club in the Area, Regional and National phases of the competition, where they will face schools representing other League clubs.

Both the local and area phases were organised by Stags' community manager Gary Shaw, who said the competition opens pathways for girls to progress in football.

"I know some of the girls already play for local clubs; whether it's Derby County or ourselves in our own set-up at Mansfield.

"Some girls play locally at grass roots level and things like that, yet there's some girls here today who just play for the school but there are lots of pathways that can be opened up via this competition."

Sutton Academy, playing on behalf of the Stags, progressed to the afternoon stage of the competition and PE teacher Judith Durrant believes her pupils enjoyed the friendly competition in the Girls Cup.

"It was a good atmosphere on that evening. There were other local schools so it got a bit competitive with our local rivals but confidence grew as we kept winning each game and kept that clean sheet, which was really, really good.

"We've put football on the curriculum over the past couple of years for the girls in lesson time and it has really developed in the girls' participating."

"We've put football on the curriculum over the past couple of years for the girls in lesson time and it has really developed in the girls' participating."

Derby County ultimately emerged as victors last week and will now progress into the regional finals.

Frankie Johnson, a 12-year-old player for the Rams, said she was excited at the prospect of playing at Wembley.

"It's good missing school and also the football is really run! We all just love playing football. We've got a lot of players who play for the RTC (regional talent club) and Derby Ladies," Frankie said.

"It's so exciting because someone our age can play at Wembley at this stage and we're only 12 or 13. Professional players have played there and you get the chance to do it, it's quite well-renowned."

"Probably all of our football heroes have played there at some point."

"It's so exciting because someone our age can play at Wembley at this stage and we're only 12 or 13. Professional players have played there and you get the chance to do it, it's quite well-renowned."

Stags' Premier League girls' co-ordinator Jordan Ferrer spent the morning coaching at a local school, but joined the competition in the afternoon and he reiterated the need to use fun-based activities to increase girls' participation in the sport.

"My day-to-day process is I will identify schools in need of some football. We'll go in, deliver a programme, which normally lasts around 30 weeks, and the idea is to get more girls into football and eventually those girls will go on to play for grass roots clubs or they might go on to play for Mansfield Town Ladies. We want to have a massive push to have more playing and more getting involved.

"We need to create more fun and inclusive activities. Football is seen as this very competitive-natured game and I think that's something that's put some of the girls off. When we go in, we make fun activities that they can really engage with and hopefully that will carry on into the grass roots teams and it'll become a lifelong hobby."

Confirmation of Football in the Community activities


Mansfield Town Football in the Community can confirm that a selection of Community Activities have been cancelled in accordance to EFL Guidelines, regarding COVID-19.

EFL Day of Action to celebrate impact of clubs in communities

Community unites to kick off biggest conversation on mental health


Mansfield Town Football in the Community is uniting with football clubs across the country to kick off the biggest ever conversation on mental health. 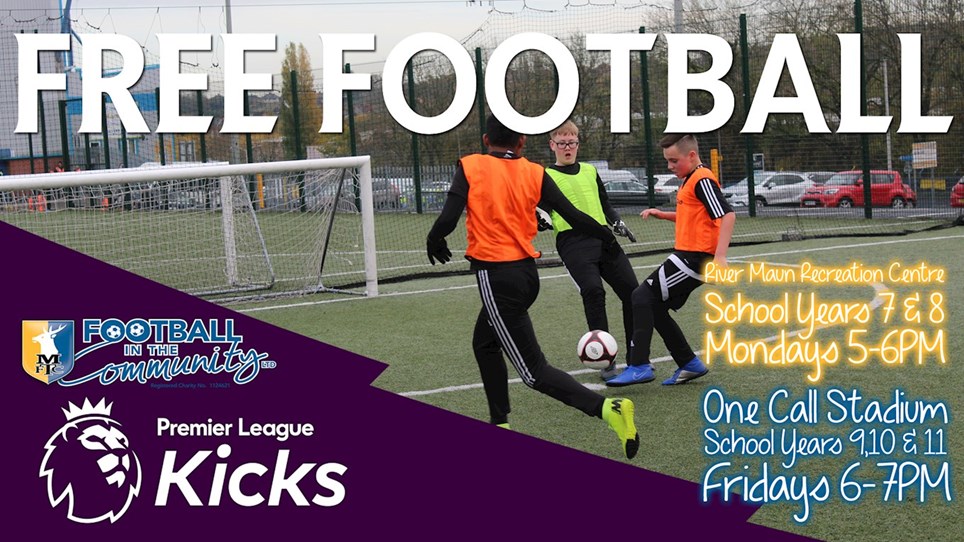 Free football on offer for youngsters with Football in the Community


Mansfield Town Football in the Community has joined forces with the Premier League to offer youngsters in secondary school FREE football sessions each week, as part of Premier League Kicks.


The Radford Foundation has generously donated £15,000 to Mansfield Harriers for new floodlights at its Berry Hill athletics track.

Confirmation of Football in the Community activities


Mansfield Town Football in the Community can confirm that a selection of Community Activities have been cancelled in accordance to EFL Guidelines, regarding COVID-19.