Stags’ boss David Flitcroft says that his players will be a ‘committed force’ in Saturday’s hotly-anticipated Nottinghamshire derby.

This weekend will be the first time that the manager will welcome local rivals Notts County to One Call Stadium since taking charge of the Stags in March of this year.

Speaking in a news conference earlier today, the manager reflected on fond memories of last season’s clashes away to the Magpies and Chesterfield, two games he overlooked as Stags’ boss, and ensured that his players will go into Saturday’s match with a ‘win at all costs’ mentality.

“We played at Notts County quite early in my tenure here and scored a late equaliser,” he said. “What it meant to the supporters, that rivalry is brilliant.

“Derby football is what the English fans are brought up on. It’s everything that you believe in as a supporter when you watch football.

“I understand the passion in English football and I saw it in the Chesterfield game [last season], with the goal that Mal [Benning] scored and what it meant to them [fans].

“It’s my first game against Notts at home as manager here. It’s something that excites me and excites the staff and players.

“There’s an added incentive for the Notts players with trying to impress the new manager [Neal Ardley].

“They tried to build a promotion-winning team, and to change Kev [Nolan] was incredible. I think from a Notts’ point of view, there’s a different incentive.

“We will concentrate on trying to improve on what we’re doing. I’m happy with what we’ve done so far but there are always improvements that have to be made.

“That has to be evident on Saturday, that ‘win at all costs’ mentality and commitment to the game plan.”

“Since I’ve come to the club, I have tried to engage the fans with a style of football that they may not have been used to. I’m sticking to that plan.

“The football is different [this season], that’s what I do know. We’ll certainly be a committed force on Saturday.

“I think how we start will be important. Certainly at home, where for large periods of games we’ve dominated teams. We have a certain way of playing at home and we’ve been very resilient.

“That has to be evident on Saturday, that ‘win at all costs’ mentality and commitment to the game plan.”

The Stags’ boss also praised the ‘phenomenal’ support of the Mansfield faithful, adding that he ‘can’t ask any more’ from the fans.

“The fans want to come and see our commitment and engage in that. Since I’ve come into the building, the support I’ve received, I hold them in high regard.

“I don’t expect any more or any less from the fans [on Saturday]. They have been phenomenal this season and I can’t ask any more of them.

“Because the Crawley game was called off, we might get more in [on Saturday]. That’s the only thing I would say, to come along.” 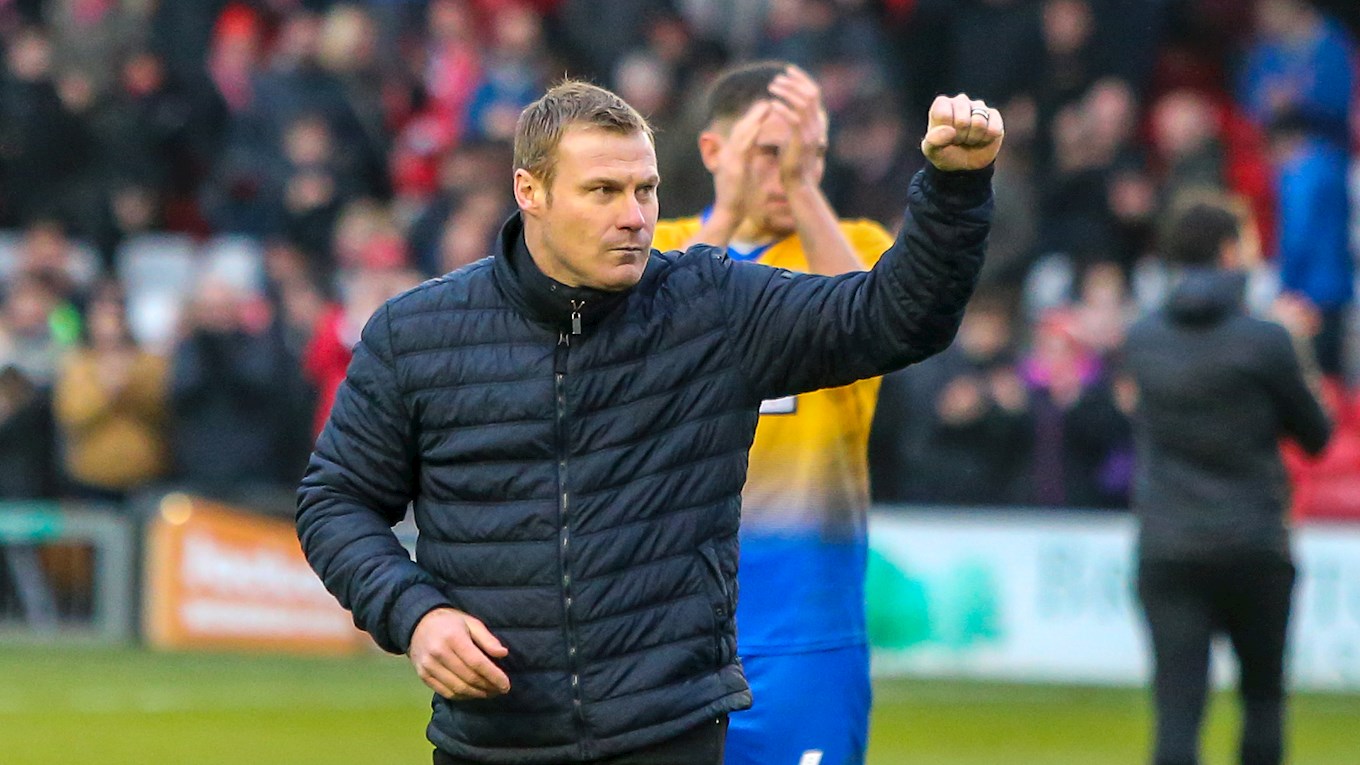 Looking back on Tuesday night’s Checkatrade Trophy exit at the hands of Bury, the manager expressed his disappointment at being out of the competition, but says he is keen to move on as we approach Saturday’s big match.

“You have to, at times, forgive yourself and certainly forgive the players. Football moves on quickly and I think that’s a good thing.

“Did I want to get to Wembley? A million per cent. The Checkatrade Trophy represents a great opportunity for League One and Two clubs to get there.

“There are opportunities that we haven’t taken, which after the game [against Bury], we were frustrated about.

“But when one opportunity closes, another one opens. That’s how I move on, because I’m a very positive guy and surround myself with super positive people.”

The manager also gave an injury update on four of his players.

“The Macca [Alex MacDonald] one [injury] is a strange one, because it’s bone bruising. I genuinely can’t give a timescale because it’s such an unusual injury.

“It’s [about] how the injury settles, as not one bone bruising injury is the same as another. So I just can’t give a timescale on it.

“It’s not just frustrating me, but it’s frustrating Macca because when I look at him and what he gives in training and to the squad, he needs football. He needs to be out there, so I’m gutted for him.

“Mirf [David Mirfin] was always going to have a steady road back. He’s been in training with us for about three weeks.

“He is steadily getting better and improving. It’s not an injury that we’re going to rush. It’s really important that we get everything right with him. He has had a couple of setbacks, and we’ve worked through them with him.

“His mental strength is as solid as I’ve seen in any player. He’s had an unbreakable spirit. He’s definitely at the end stage [of recovery]. He’s probably going to need around eight consecutive games before we have him back in the first team squad.

“We got him [CJ] 45 minutes in [against Bury] and I thought he was outstanding. If he played 90, it could have depleted him, and that’s the advice we got.

“We’re looking forward to him being out there on Saturday because he’ll have that energy.

“It [Krystian Pearce’s groin strain] has settled down slightly, but Pearcey won’t train today. We usually do our shape work today but we’ll put that off until tomorrow.

“He won’t train today but we’ll keep monitoring it and I’ll see how it settles down. We hope so [he will be ready for Saturday]. We’re hoping he can come through it.”