Kane Hemmings’ 12th goal of the season was not enough for Mansfield Town this afternoon as Luton Town came from behind to win 2-1 at Kenilworth Road, thanks to second-half goals by James Collins and Glen Rea, writes Liam Kent.

Mansfield went into half-time with a one goal advantage after a game-changing two minutes. At one end, Stags' ‘keeper Conrad Logan made a superb save with his legs to deny Luton’s Elliot Lee. Referee Kevin Johnson awarded Mansfield a free kick in the aftermath of that chance and from the resulting set piece, the Stags took the lead. Logan pumped the ball forward and he found striker Kane Hemmings who spun defender Scott Cuthbert before slotting the ball past ‘keeper James Shea.

Needing a win to keep up their hopes of automatic promotion, Luton started the second-half strongly and they got their equaliser in the 61st minute. Striker Lee Collins turned the ball home from inside the area after being picked out by a ball from the right by Pelly-Ruddock Mpanzu. That kept the Hatters in the ascendancy and they got their winner with 20 minutes to go. Logan was unable to keep hold of Alan Sheehan’s dipping free kick and Glen Rea, on as a first-half substitute, reacted quickest to put the ball in the back of the net.

Stags' manager David Flitcroft made one change to the side that fought bravely but lost narrowly against Accrington Stanley on Good Friday. Johnny Hunt came in for Mal Benning at left back, Benning serving a suspension after receiving a red card in that 1-0 loss three days ago. Imperious defender Krystian Pearce returned from suspension and was given a place on the bench, alongside winger Alfie Potter who made his comeback from injury.

The Stags and the Hatters headed into the game with the joint lowest amount of losses in the division but were both looking to bounce back from defeats in their previous outings.

It was Mansfield who got the game underway and the Stags immediately started on the front foot and put the Luton defence under some early pressure.

In the eighth minute of the contest, good work between left back Johnny Hunt and flying winger CJ Hamilton almost ended in the latter going clear in the Luton area but the former Sheffield United man was just unable to keep the ball in play.

The Stags continued to enjoy the better of the early possession but were yet to test James Shea in the Luton goal, whilst at the other end, Mansfield ‘keeper Conrad Logan was practically a spectator for much of the opening ten minutes.

Luton soon sparked into life however and the prolific Danny Hylton almost added another goal to his collection but his shot from inside the Stags area was blocked before it could test Logan.

The home side almost carved an opening again in the 17th minute but Elliot Lee was unable to get the ball under his control after being picked out by a whipped cross from the left.

Mansfield were protesting for a penalty in the 24th minute as Hamilton went down inside the area but referee Kevin Johnson waved away the appeals which were, at best, half-hearted by the men in amber and blue.

The first real attack of the game arrived in the 26th minute and it was by the Hatters. Good work on the ball by Luton ended in Dan Potts overlapping into the Mansfield area but his fizzed ball across the face of goal was intercepted and cleared by centre back Rhys Bennett with Hylton waiting to tap in.

Mansfield then went up the other end and almost scored the opener themselves. Striker Kane Hemmings tried his luck from inside the area but his effort was deflected out for a corner.

The game was becoming very end-to-end and for Mansfield, Johnny Hunt did well to get up and head away a cross by Luton’s Pelly-Ruddock Mpanzu with Olly Lee waiting to finish at the back post.

With the game reaching the half hour mark, it was a closely fought affair with both teams looking like they could find the opener.

Stags captain Zander Diamond almost headed his team ahead after meeting a corner by winger Alex MacDonald but the former Northampton Town man couldn’t keep his effort down and the deadlock remained.

After being untested for the opening 32 minutes, Conrad Logan was then called into action as he was forced into a big save. Elliot Lee managed to get clear of the Stags defence and he drove into the area but saw his shot saved brilliantly by the legs of the former Hibernian ‘keeper. The ball looped into the air but Mansfield escaped as the referee awarded a free kick for a foul on Logan.

That save proved to be crucial as moments later, Mansfield took the lead. Logan sent the resulting set piece forward and it found Hemmings on the edge of the Luton area. He managed to get the better of Scott Cuthbert, turning the Luton captain before keeping his calm to slot the ball past Shea.

Mansfield almost doubled their advantage in the 38th minute but were denied by some last-ditch defending from the Hatters. A corner into the area caused havoc and both Jacob Mellis and Alex MacDonald saw their efforts saved before MacDonald picked up the rebound and played it across to Zander Diamond, who saw his shot headed over by a Luton defender.

The Stags went into the interval with their noses in front but it was almost even better for David Flitcroft’s men as they struck the woodwork late into the first half. Jacob Mellis tried his luck from range and his strike looped up and clipped the bar with Shea stranded in the Luton goal.

That wasn’t the last of the first-half drama however as Logan was once again called into action. Elliot Lee flicked the ball through the Stags defence and he found James Collins a few yards out. The Luton forward poked a shot towards goal but again Logan was there to deny the home side, sticking out a leg to clear the shot away.

Luton started the second half like a side who had a point to prove and they had the first chance of the second period. The ball was teed up for Olly Lee 16-yards out but he bent his shot high and wide.

The Hatters were taking the game to Mansfield in the early stages and Elliot Lee sent a powerful drive towards the top corner but thankfully for the Stags, Logan was there to dive to his left and spectacularly tip the ball over the bar.

The home side maintained their pressure and almost scored a fortuitous equaliser. Jack Stacey’s cross-cum-shot from the right flank appeared to be going out but at the last second it clipped the edge of the Mansfield bar and bounced out for a goal kick.

It had been all Luton in the early stages of the second half but the Stags almost hit them on the counter-attack. Mansfield broke well and it was three-on-two with Jacob Mellis charging at the defence with strikers Lee Angol and Kane Hemmings either side of him. Mellis slipped the ball to Hemmings on his right and the Stags' scorer cut inside of his left foot but saw a shot blocked.

Luton had managed to get on top and they got their equaliser just after the hour mark. Mpanzu charged towards the right byline and he pulled the ball back across to James Collins who fired past Logan from a central position.

The game was now well and truly up for grabs and Mansfield almost retook the lead in the 65th minute. Hemmings’ cross from the right was headed down by Diamond towards Angol who took a touch before seeing his side footed effort deflect narrowly wide of the upright.

The game quickly turned on its head as Luton took the lead. A free kick from a central position by veteran Alan Sheehan was saved by Logan but Glen Rea was on hand from close range to force the rebound home.

In response to his side going behind, Mansfield manager David Flitcroft made his first substitution as Alfie Potter was brought on to replace Will Atkinson, Potter operating on the right wing with MacDonald moving to the centre of midfield.

After getting an assist for first goal, Luton’s Pelly-Ruddock Mpanzu went in search of a goal of his own but in the 77th minute, his low shot from 20-yards out was easily held by Logan.

With just five minutes to go, Mansfield needed an Easter miracle of their own to resurrect something from the game and the men in amber and blue kept giving their all to try and find a way back into the contest.

Luton were looking dangerous on the counter however and right back Hayden White went into the referee’s book for cynically bringing down Mpanzu as he looked to drive at the Mansfield defence.

Time was running out and Stags' gaffer Flitcroft made one last roll of the dice, bringing on a double substitution to bolster his sides attacking options. Both full backs, Hayden White and Johnny Hunt, were taken off and they were replaced by right winger Paul Anderson and striker Ricky Miller.

Mansfield were presented with a good opportunity to create a late opening as they were awarded a free kick 30 yards out after a foul on Miller. MacDonald floated the ball into the area but it was too deep and went out for a Luton goal.

Lee Angol almost scored a stunning equaliser as he tried a volley from 25-yards out but the well-struck effort lacked the direction and Shea was able to watch it out.

Luton then nearly added a third which would have killed Mansfield off but Mpanzu saw his shot parried out by Logan before James Justin dragged the rebound wide of the Stags goal with the help of a deflection.

In the end, Luton’s two second-half goals proved to be enough, despite the Stags having a bunch of chances throughout the game.


Danny Johnson struck in both halves as Mansfield Town produced a fine performance to win 2-1 at Hull City.


A last-gasp strike from Tyrese Sinclair helped Stags to a 2-1 victory in this evening’s pre-season friendly at Alfreton.


Mansfield Town welcomed several players back to the first team fold as they battled with Grimsby Town in a friendly at the club’s training ground this afternoon. 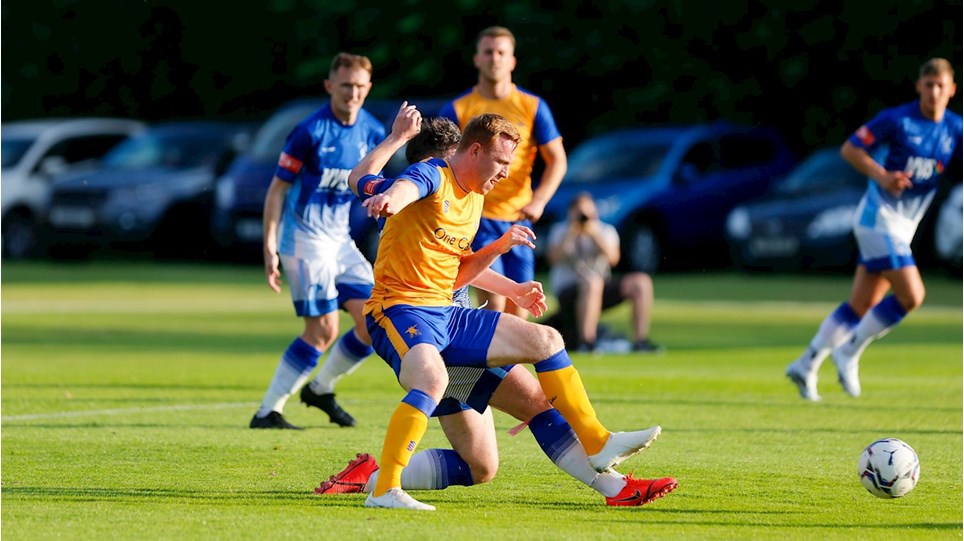 
Callum Chippendale's first half strike was enough to separate Matlock and Mansfield as the Stags completed their second match of pre-season.