England under-19s host Germany at One Call Stadium evening and will be looking to pick up where they left off in the summer.

The Young Lions were crowned European champions after beating Portugal 2-1 in Georgia, the first time England had won the European Under-19 Championship since 1993.

And manager Paul Simpson, who led the under-20s to World Cup glory in South Korea in June, is confident that he has a squad capable of retaining their European crown in Finland next year.

“It’s a great time to be involved with English football,” insisted Simpson. “We had a really strong group in the under-20s at the World Cup and we feel as though we’ve got a really strong team this year with the under-19s.

“We’re ready go and carry on the hard work that Keith Downing and his group of staff did in winning the European Under-19 Championships. We’re hoping to go and emulate that and retain the trophy next summer in Finland.

“What we’ve got here is a group of staff who were involved in the World Cup and have that experience, but we’ve also got a lot of people who have spent a number of years in football and other sports.

“So we’re able to call on experience from all staff from different backgrounds and I think that’s the beauty of the FA; we’ve got a really good variation of input for the players to try and help them develop.” 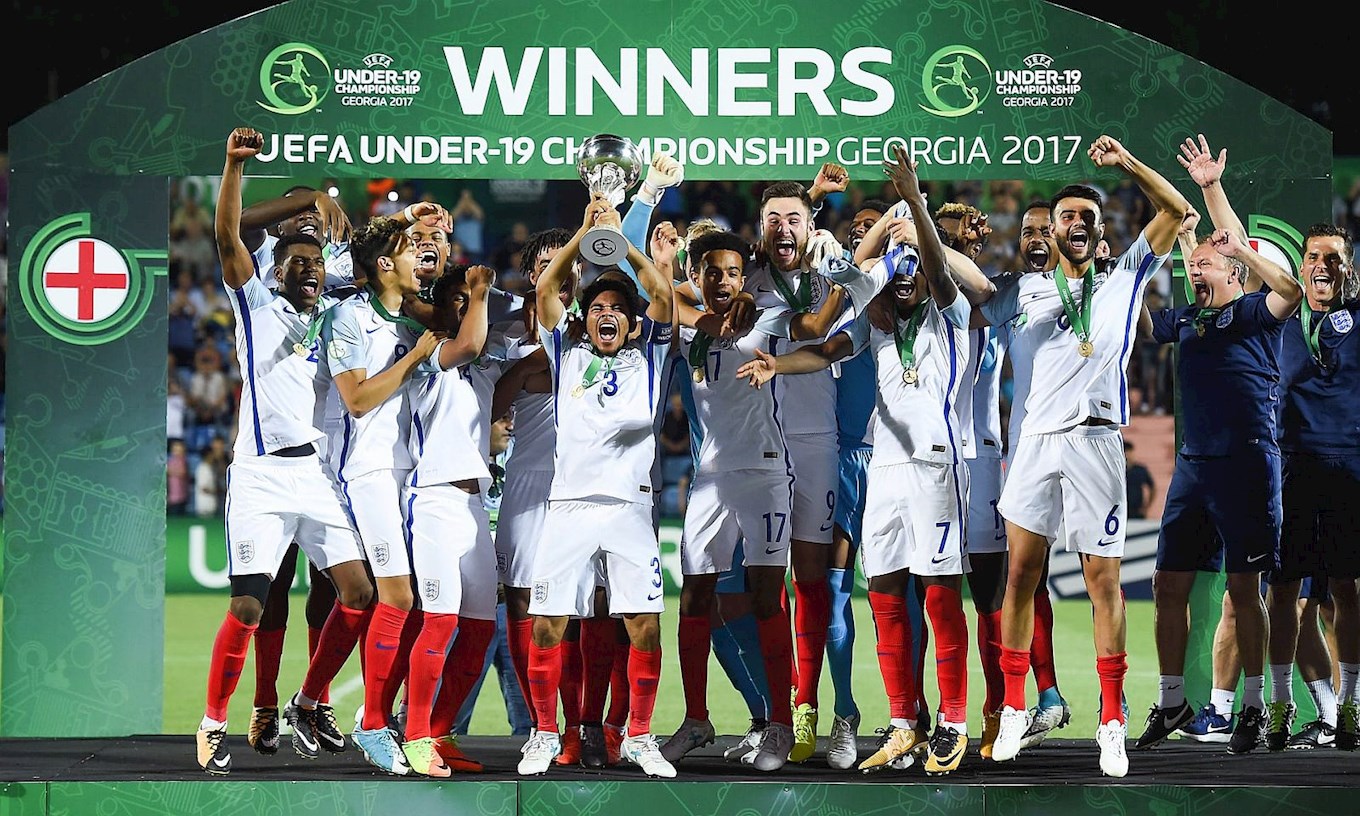 In addition to the nation’s under-20 and under-19 glory, the Three Lions also won the Toulon Tournament at under-18 level while the under-17s reached the semi-finals of the European Under-17 Championship.

“I’ve got no doubt about it that we’ve got some really, really gifted players – through every age group, right up to the senior squad,” continued Simpson.

“We have got some really good players but, what I think we tend to do it jump to conclusions too early and put this label on people – let’s just enjoy what they’re doing and enjoy watching them develop without actually putting any pressure on them.

“I think we’ve just got to keep developing them and keep giving them as much variation for their experience as we possibly can. Playing against top nations like Germany will give us the best opportunity of getting these lads though to senior football.”

Nine players from the Toulon Tournament winning side have been called up to the under-19s by Simpson, while only four remain from the squad that clinched under-19 European glory.

But Simpson is adamant that this will give him an opportunity to assess all of the players available in order to put together the best possible squad for the tournament in Finland next year.

"[We want to] put on a good performance for the Mansfield public and then reassess heading into the next round of games."

“Every time you pull on an England shirt you’re representing our country and you have to go and perform to the best of your ability,” stated the manager.

“There is an expectation that we want to get a positive result so, it’s not totally transitional; it’s a case of all the staff having a look at the players, but they know they want to be involved again so they’ll be doing everything they possibly can to be in the next squad to face Czech Republic.”

“We’re taking the opportunity to look at a much wider group of players; we’re planning for the full year ahead. There are a number of players who were unavailable for this camp through club unavailability or injury, and we’re trying to get as many players as we possibly can.

“We’ve got a squad of 23 and we’ve then got another two friendlies in October where we’ve got the chance to look at other players and we’ll use it as a process to look at players who we believe are strong enough to go with us throughout the rest of the season.”

The last time England met Germany at under-19 level was during the European Championships, and the Young Lions swept their fierce rivals aside with a resounding 4-1 win in the semi-final.

“When we saw the game at the Euros, that result was a fair reflection on that particular game,” admitted Simpson. “This under-19s is a different group now; we’re working with a group of players, some of whom were in the under-18s and have been pushed up, and I’m quite sure Germany will be in the same situation. 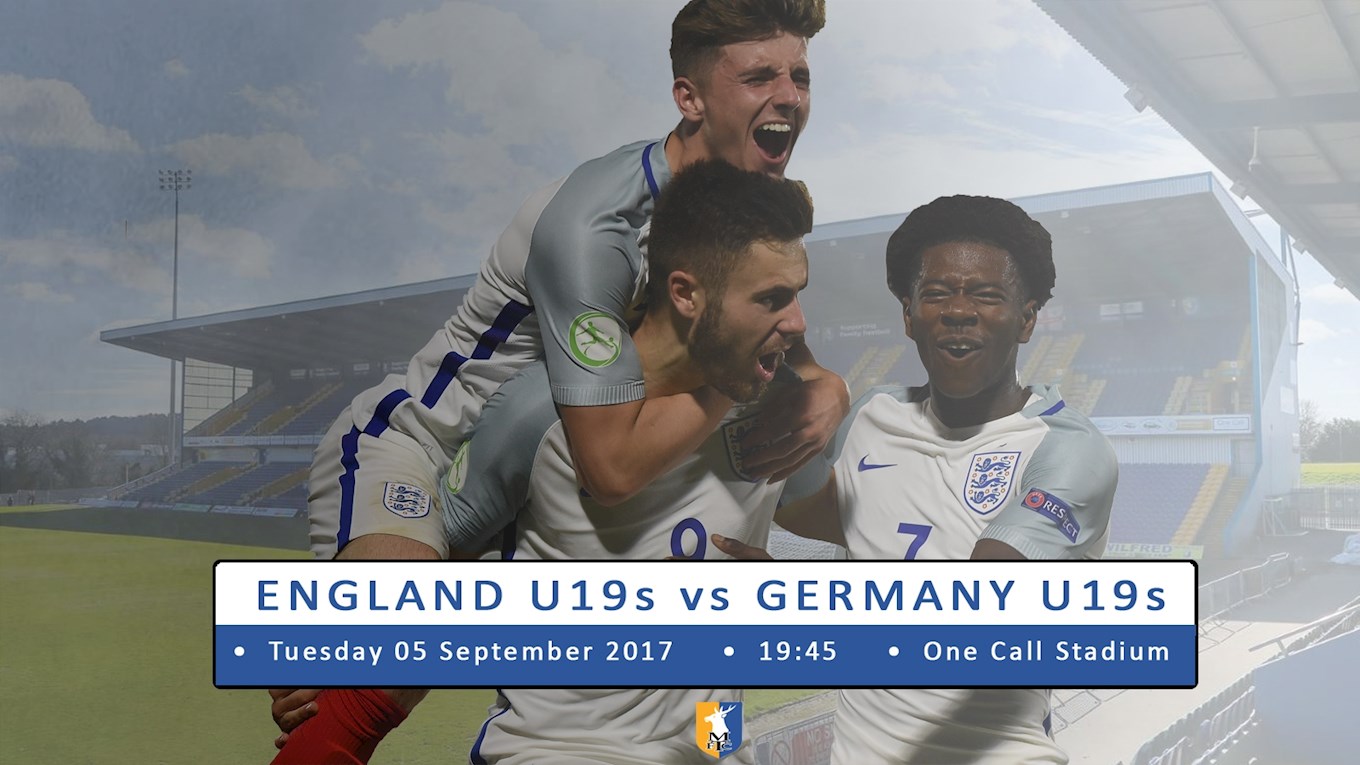 “Although we can plan and have a general idea of what Germany are going to be like, we don’t really know the individuals yet until we get the team sheet on Tuesday night and then we’ll be able to play the game, hopefully put on a good performance for the Mansfield public and then reassess heading into the next round of games.”

Prior to Tuesday’s fixture at One Call Stadium, Simpson’s squad have been training at St George’s Park, where they beat Poland 3-1 in a friendly on Friday.

The under-19s manager believes the experience of training at the same location as the senior team has been extremely beneficial for his side and that there is a feel good factor surrounding the camp.

“It’s a big help because it gives us a really big central base,” said Simpson. “We’ve got fantastic facilities – everything is here on site – and I think, what we’ve had this week, has had a really good feel to the place.

“We’ve had the senior squad, the under-21s, the under-20s, the under-19s and under-18s all on camp together so, in and around the hotel, you’ve got the youth teams mixing with the senior players and it’s got a really good feel to it.

“Gareth Southgate [England manager] and Steve Holland want you to be involved with everyone and it has a good atmosphere and hopefully we can carry that on for years to come.”

Tickets for the game are priced as follows and can be purchased by calling the Stags' ticket office on 01623 482 482.

Tickets for the fixture are priced as follows:

Charter standard clubs are eligible to receive 25 free tickets upon proof of registration.

Disabled supporters are required to purchase a ticket in the relevant age-related category with a carer free of charge.

Please note: initially, tickets can only be purchased in the Ian Greaves Stand.