Stags' fitness and rehabilitation coach Lee Taylor says he feels humbled to have been inducted into the Football Medical Association's '21 Club', recognising his career in professional football.

Taylor was presented with the award at a prestigious awards ceremony at the end of May in front of over 180 other medical professionals from the world of football.

The 21 Club award is presented to football medical professionals who have worked in professional football for 21 years or more.

After beginning his career 25 years ago as the EFL's youngest ever first team physiotherapist at Scarborough, Taylor has enjoyed roles in the Premier League, EFL and abroad before joining the Stags in November 2016.

And Taylor, who had a spell working in the Indian Super League prior to joining the Stags, says receiving the award in front of so many fellow professionals and friends was a humbling moment.

"It was quite humbling really because when you get awarded something from your peers and the people you've worked with in the last 25 years in professional football and they're all there with their respective clubs, it's a nice feeling," Taylor said.

"All my mates were there, irrespective of who they are or where they are working whether it's in the EFL or the Premier League. It's quite humbling to get an award.

"We are a major support mechanism for the manager to be able to give him the best, strongest, injury-free, elite athlete so he can coach and pick the best side he feels fit to win games."

"We work so hard and sometimes people don't see the work we do. I look after everything on the high performance side of things at the club – from the nutrition, sports science and the fitness side.

"For me, it was nice to be awarded something after all these years which was personal. 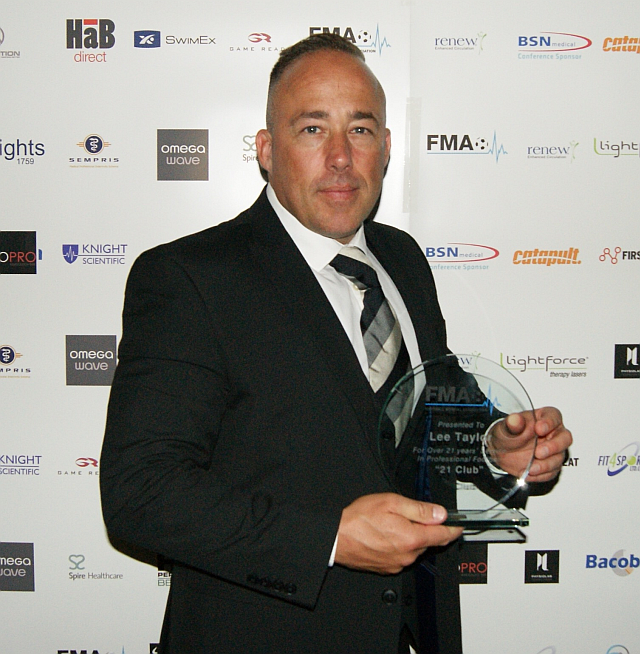 "People don't understand what we do as operators in the professional game. We are a major support mechanism for the manager to be able to give him the best, strongest, injury-free, elite athlete so he can coach and pick the best side he feels fit to win games."

Taylor explained: "Johnny Wilson (head of sports medicine at Notts County) and I worked together for two or three years at Notts County and when I left to go to the ISL (Indian Super League), Matt was an intern. I took Lizzie Read (Stags' first team sports therapist) there as an intern and he took on Matt, so he knows Matt very well.

"John only came in for the awards and he was a bit distressed. He came over to me and said 'we've won the League Two Sports Medicine Award and I want to dedicate it to Matt's family'.

"I went up and got my award and delivered a fitting tribute to Matt and his craft at the club and I spoke about his character and how he dealt with everything at the club.

"Johnny stepped up and got his award and said 'I'd like to dedicate this to Matt Salmon' and 'I'd like Lee Taylor from Mansfield Town to come and receive it on behalf of his wife and family'.

"I said a few things and Eamonn Salmon, chief executive officer of the FMA and no relation to Matt, also said some nice words in honour of Matt."