Skip to main content Skip to site footer
We continue our review of our Blue Square Bet Premier title-winning campaign by reflecting on what was a topsy-turvy November.
As the winter days drew shorter and Guy Fawkes’ failed gun-powder plot was celebrated once again, our team were embroiled in some explosive cup action.
The month began with the visit of lowly Slough Town in the First Round of the FA Cup, but the rebellious Rebels proved to be an extremely tough nut to crack.
Several chances were spurned as Steve Bateman’s men produced a monumental defensive display at One Call Stadium to earn a courageous 0-0 draw.
Ten days later at Holloways Park, fireman David Woozley’s own-goal failed to extinguish Slough’s cup dream, as Nathan Bowden-Haase stunned the Stags with a late equaliser.
After two matches of missed chances, penalties were required to separate the two teams, where we finally progressed thanks to some well-placed spot-kicks.
Sandwiched in-between the two FA Cup encounters were league clashes with Nuneaton Town and Southport, where we collected four out of six possible points.
Nick Wright’s equaliser was the highlight in our 1-1 draw at Liberty Way, before Ben Hutchinson’s early opener settled an unspectacular encounter with Southport.
Hutchinson was again on target a week later in our 2-2 draw with Luton Town, where Andre Gray’s brace put the Hatters on course for a win, before Matt Green levelled late on.
Macclesfield Town were soundly thumped in our re-arranged league clash at Moss Rose, where Matt Green, Lindon Meikle and Luke Jones found the net in an impressive 3-0 success.
However, it was more dogged lower league opponents, this time in the shape of Matlock Town, which led to our shock elimination in the First Round of the FA Trophy.
At One Call Stadium, Adam Murray’s strike was cancelled out by Lewis McMahon’s equaliser, which earned the Gladiators a much-deserved replay.
And just three days later, Massiah McDonald wrote his name into Matlock Town folklore with a dramatic last-gasp winner that condemned us to a shock 2-1 defeat.
Also in November:
- Solomon Taiwo was released after his short-term deal with us expired.
- FIFA-listed Japanese referee Jumpei Iida oversaw our FA Cup First Round tie with Slough Town.
- Goalkeeper Alan Marriott returned to action in a second-string draw at Hull City.
- Jamie Hand joined Conference South side Eastleigh on loan.


The EFL stands with the Premier League, The FA, PFA, LMA, the FSA and colleagues across European professional football in condemnation of proposals which attack the foundation of open and fair...


Watch the Stags take on Scunthorpe United for just £10 on iFollow Stags!

Goalkeeper voted man of the match from Stevenage win


Supporters have voted goalkeeper Aidan Stone as their man of the match from Saturday's 1-0 win away at Stevenage. 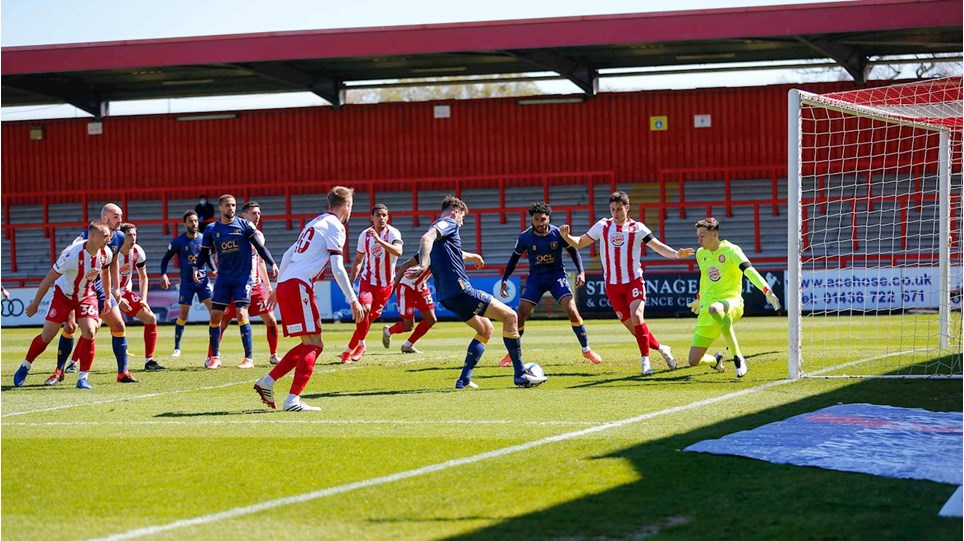 
Here's our match gallery from Saturday's 1-0 win away at Stevenage.