Mansfield Town slipped to a disappointing defeat against Newport County on the opening day of the Blue Square Bet Premier season.
The Stags found themselves two goals behind after only a quarter-of-an-hour of the game, but hit back through strikes from Jake Speight and Matt Green at the start of the second-half.

Former Stags players Aaron O'Connor and Jefferson Louis helped to restore County's two-goal advantage, before Speight grabbed his second goal in the final minute of normal time.
Ross Dyer also had to be carried off on a stretcher with what looked like a suspected knee-injury as Paul Cox's side endured a thoroughly miserable start to the new campaign.
Despite this, Mansfield began brightly on a glorious day in North Nottinghamshire and had the visitors from South Wales penned in their own half for much of the opening ten minutes.
Jamie Tolley failed to test Lenny Pidgley with a shot from the edge of the area on four minutes, before Lindon Meikle cut inside from the left flank and hammered a shot wide of the woodwork.
However, it was Newport who opened the scoring with their first chance of the game.
Danny Crow picked out Ismail Yakubu with a vicious right-wing free-kick into the area and the big centre-back rose above everyone else to flick the ball beyond a helpless Alan Marriott.
Justin Edinburgh's side then shocked One Call Stadium further, as they doubled their advantage less than two minutes later.
The Stags failed to deal with a corner from the right flank and Anthony Howell's partial clearance reached Tony James on the edge of the box, who lashed home with venom.
With the home crowd shocked and silenced, Newport came within inches of adding a third on 16 minutes.
O'Connor outpaced Lee Beevers and whipped a delightful low ball through the six-yard box, but the industrious Crow was unable to make a connection and the danger was eventually cleared away by skipper George Pilkington.
Forced to push forward, the Stags then created two chances in as many minutes around the midway point in the first period.
Howell connected with a long throw by Andy Owens, but saw his header crash against the woodwork, moments prior to Green firing wide from distance after a fine run from the middle.
The Stags soon suffered a worrying setback though, when Dyer collapsed in a heap in the far corner of the field clutching his knee.
Evidently in pain, the former Forest Green Rovers man received lengthy treatment and was eventually carried off on a stretcher.
Mansfield enjoyed plenty of possession as the half grew old, but failed to create any more meaningful openings until five minutes before the break.
Green and Gary Roberts exchanged a series of neat passes, which led to Speight being released through on goal.
The Stags striker took a touch to control the ball, before he was clumsily brought down by a back-tracking David Pipe on the edge of the area.
However, desperate appeals for a penalty were waved away by the referee, who booked Speight for an apparent dive, much to the fury of the majority of the One Call Stadium crowd.
The Stags came out in resurgent fashion after the re-start and hit back almost instantaneously.
Tolley collected possession on the edge of the area following some good work from Meikle and spun away from his marker to get a shot away on goal.
His effort was only parried by Pidgley, but Speight was on hand to fire home the rebound and register his first goal of the campaign.
The Stags continued to attack and Meikle went down under a strong challenge in the box a minute later, but once again the referee from Greater Manchester waved away protests for a spot-kick.
However, the rejuvenated Stags soon grabbed a deserved equaliser.
Beevers played an intricate ball out of defence, which reached Green on the box. The former Oxford United striker then flicked the ball over an advancing Pidgeley to level the encounter.
Nevertheless, Newport were not to be deterred by the Stags quick-fire comeback, as they soon regained their advantage with a cleverly worked goal.
Jake Thomson delivered a free-kick into the area and O'Connor rose highest and flicked a fine header into the corner of the goal with Marriott rooted to his line.
Nick Wright replaced Tolley shortly after the hour mark, before Newport extended their advantage through former Mansfield player Louis on 66 minutes.
The well-travelled striker capitalised on some poor defending inside a crowded penalty area and fired past Marriott from close range to leave the One Call Stadium completely stunned for a second time.
Roberts did his best to try and reduce arrears but blazed his shot well over the woodwork, before Wright came much closer on 74 minutes when he powered his way through and saw a powerful attempt blocked by the body of Pidgley.
Newport enjoyed the majority of possession in the closing stages and seemed to be edging towards a comfortable victory, but in the final minute of normal time hope was temporarily restored when Speight headed home a Green cross into the net at the back post to set up a grandstand finale.
The Stags pressed forward in four frantic minutes of additional time and enjoyed a series of corners, the last of which saw Luke Jones head wide from only a few yards out as the visitors nervously held on to record a narrow opening day victory.
Attendance: 2,924 (357 away supporters). 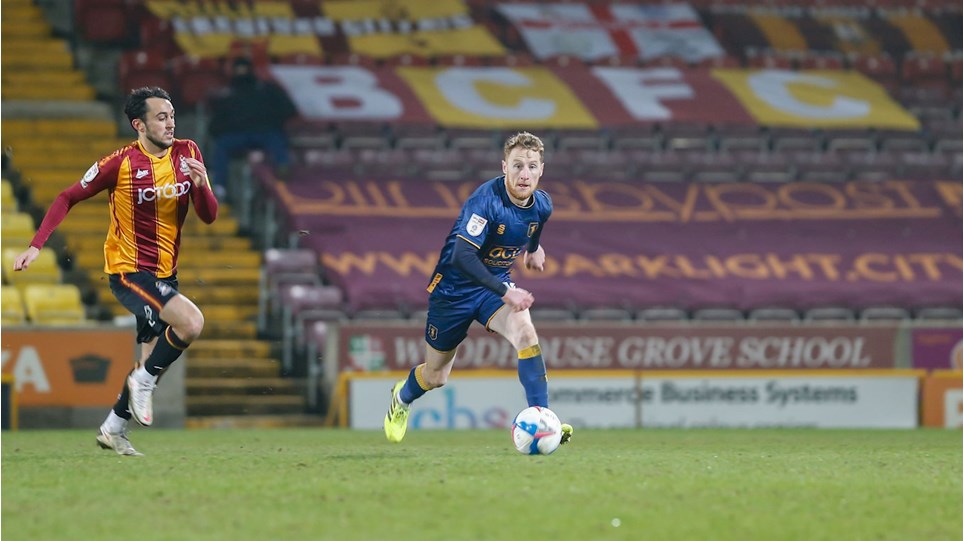 
Mansfield Town fell to a narrow defeat away at in-form Bradford City on Tuesday evening.