The league action continues for Mansfield Town’s under-18s as they host Grimsby Town at the RH Academy on Saturday (11am).

The visitors find themselves eighth in the Youth Alliance League (North East division) with four points from just two games, whilst the Stags sit sixth in the ten strong league with six points.

Striker Jack Deakin will be looking to continue his rich vein of goalscoring form after a magnificent hat-trick in the 4-3 defeat to Lincoln City last weekend, whilst the Mariners come into the game off the back of a 1-0 victory at home to Salford In the Youth Alliance Cup.

Mansfield’s youngsters tasted victory in their last contest with the Lincolnshire outfit, with the Stags running out 2-1 winners.

Goals from Nathan Saunders and Shamar Lawson secured the points for the Stags after Lennon Stead opened the scoring for Grimsby.

The Mariners started the contest strongly and took the lead after 16 minutes. Forward Luis Adalard slipped Stead through on goal, and the midfielder composed himself before sliding the ball past Maison Campbell in the Mansfield net.

And it took an inspired showing from Campbell to prevent Grimsby from extending their lead 15 minutes later.

The Mansfield ‘keeper made a smart stop to deny midfielder Evan Khouri before a stunning double save moments later.

Ayodeji Owoeye found himself in space in the box but looked on in awe as Campbell somehow managed to tip his goal-bound effort onto the post, before the ‘keeper reacted quickly to keep out the rebound from point-blank range.

And the goalkeeper’s heroics proved a turning point in the game as the Stags levelled the scores just five minutes later.

Midfielder Ethan Hill worked the ball out wide to Lawson, and the winger cut inside and gave Grimsby goalkeeper Hugo Banks no chance as he curled his effort into the top corner to make it 1-1 in the 35th minute.

The teams went in level at the break after an end-to-end first-half, and the game continued in a similar fashion after the restart.

The Mariners came out the blocks quickly once again, but it was the amber and blue who went ahead in the 55th minute.

Lawson turned creator as his corner was met by Jamie Chisholm, and his header was finished off by his defensive partner Saunders who powered home to make it 2-1 to the Stags.

Grimsby pressed for an equaliser after going behind, with the lively Khouri again denied by the outstanding Campbell as he pushed away his low effort.

The Stags dug deep and stood strong against the Grimsby onslaught, but the visitors did squander a golden opportunity to equalise right at the death.

Midfielder Joseph Starbuck swung in an inviting cross which evaded everyone but the unmarked Joey Hope, but the left-back was unable to connect at the back post and the Stags breathed a sigh of relief as the referee blew the full-time whistle to give them all three points.

Stags’ under-18s battled hard in blustery conditions at The RH Academy, but it was visitors Grimsby who emerged victorious in Saturday’s Youth Alliance League fixture.

The young Stags passed the ball nicely in spells, but were unable to find a breakthrough, with two first-half goals from Grimsby’s Luis Adlard proving the difference.

The visitors started the game with intent and took the lead after just four minutes.

Stags’ defence was unable to deal with a swirling long-ball forward, and striker Adlard nipped in behind the Mansfield back-line and poked the ball past goalkeeper Maison Campbell to make it 1-0.

The conditions made it difficult for both sides, but Mansfield were persistent in trying to pass the ball and it almost led to a spectacular equaliser in the 19th minute.

Max Hurdis found himself in space on the right-hand side after some good interplay from the Stags, and Shamar Lawson was centimetres away from getting on the end of the midfielder’s clipped cross with an acrobatic bicycle kick. 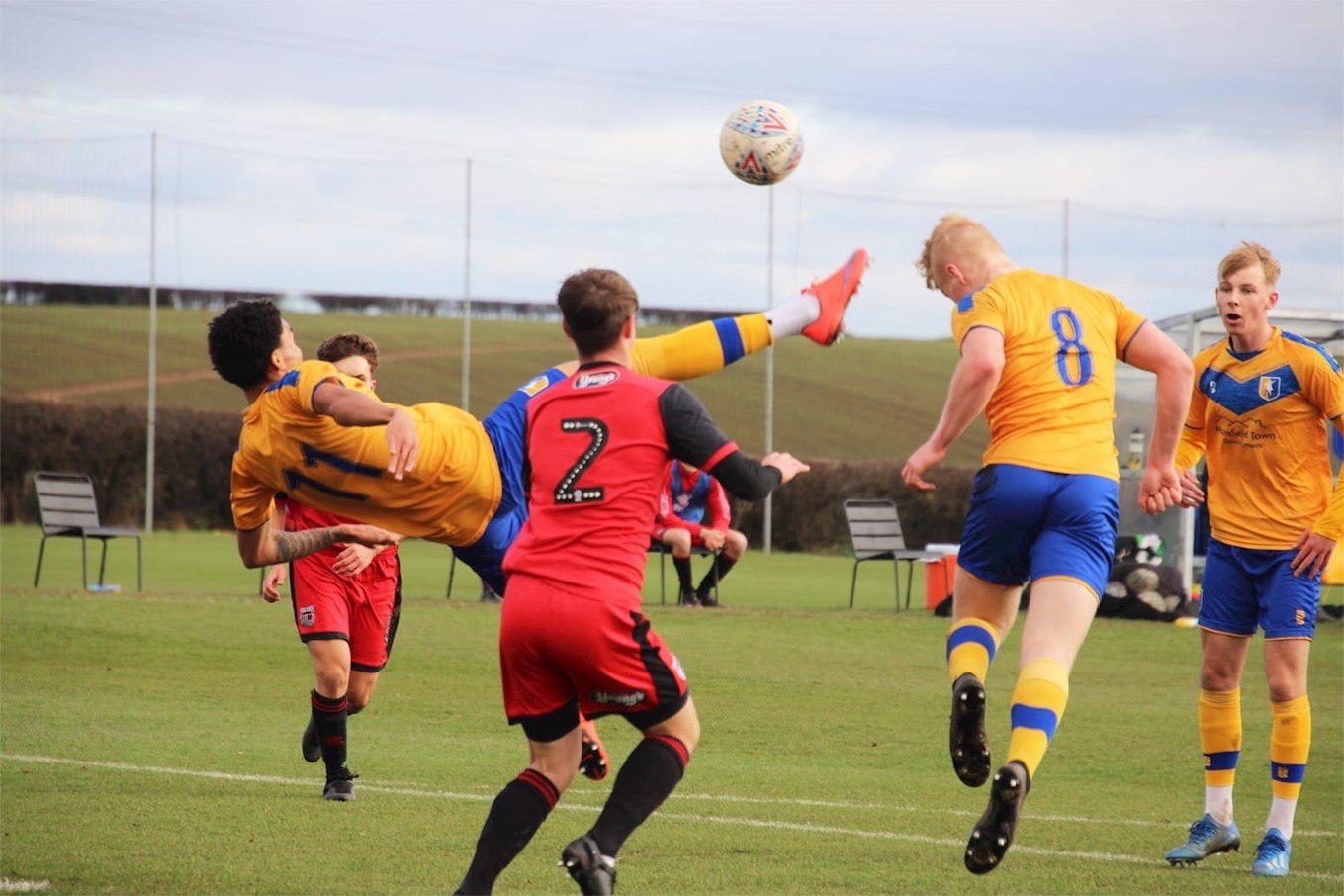 Grimsby continued to press and five minutes later, the towering Kyle Tomlin was required to step in, with the centre-back timing his tackle to perfection to halt a promising attack from the visitors.

But in the 28th minute, it was 2-0 to the Mariners. A sliced clearance fell to Adlard in the penalty area, and he composed himself before slotting into the far corner to double his tally.

And Campbell denied the in-form striker a third five minutes later, saving well with his feet after the goalscorer ghosted through and unleashed a shot from distance.

Despite coming under early pressure, the Stags rallied and finished the half in the ascendancy.

Forward Lawson was inches away from a dangerous shooting opportunity after a mazy run down the right- hand side, before some excellent last-ditch defending from the Mariners to twice deny Nathan Caine.

Another good Hurdis delivery from the right found Caine in penalty area, but the Grimsby defence put their bodies on the line to block the striker’s goal-bound effort and his follow-up as the half ended with a goalmouth scramble.

The Mariners came out strongly again in the second half, but the Stags’ rear-guard action was not to be beaten. 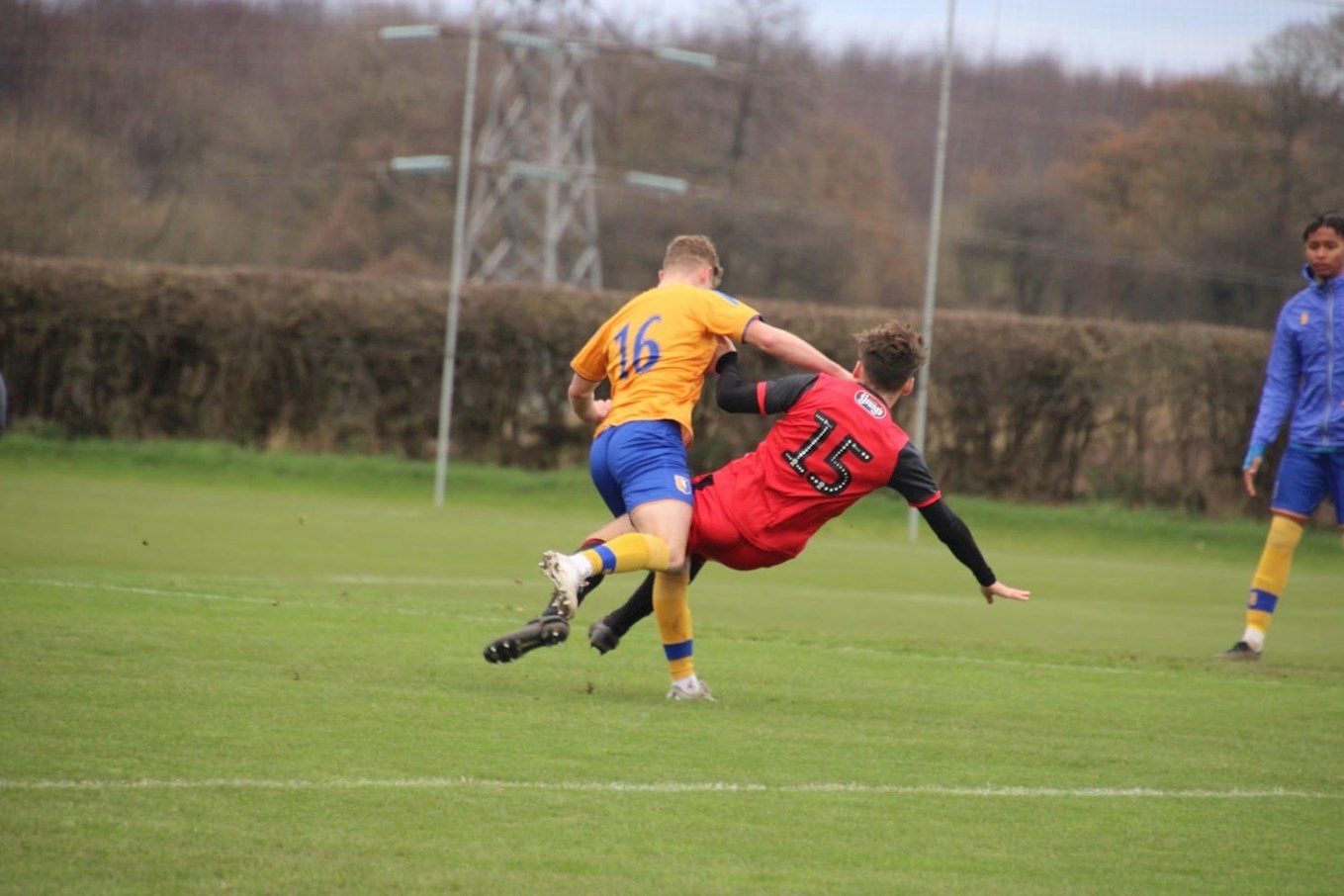 First, Grimsby’s Louis Boyd was twice denied by blocks from right-back Taylor Anderson, before Tomlin stretched to clear a dangerous cross from the winger with the opposition lurking at the back post.

It was Campbell in the Mansfield goal that was the next into action, saving expertly from Edwin Essez after the striker was put through on goal by centre-back Jamie Bramwell.

The Stags’ worked an opportunity of their own in the 53rd minute after a driving run through the middle from Lawson.

The attacker found some space and played a one-two with striker Jack Deakin, but was unable to hit the target as he curled his effort narrowly wide from the edge of the box.

Another superb save from the fearless Campbell kept out Essez yet again, as he was equal to the Grimsby striker’s close-range effort following a lay-off from diminutive midfielder Jamie Potts. 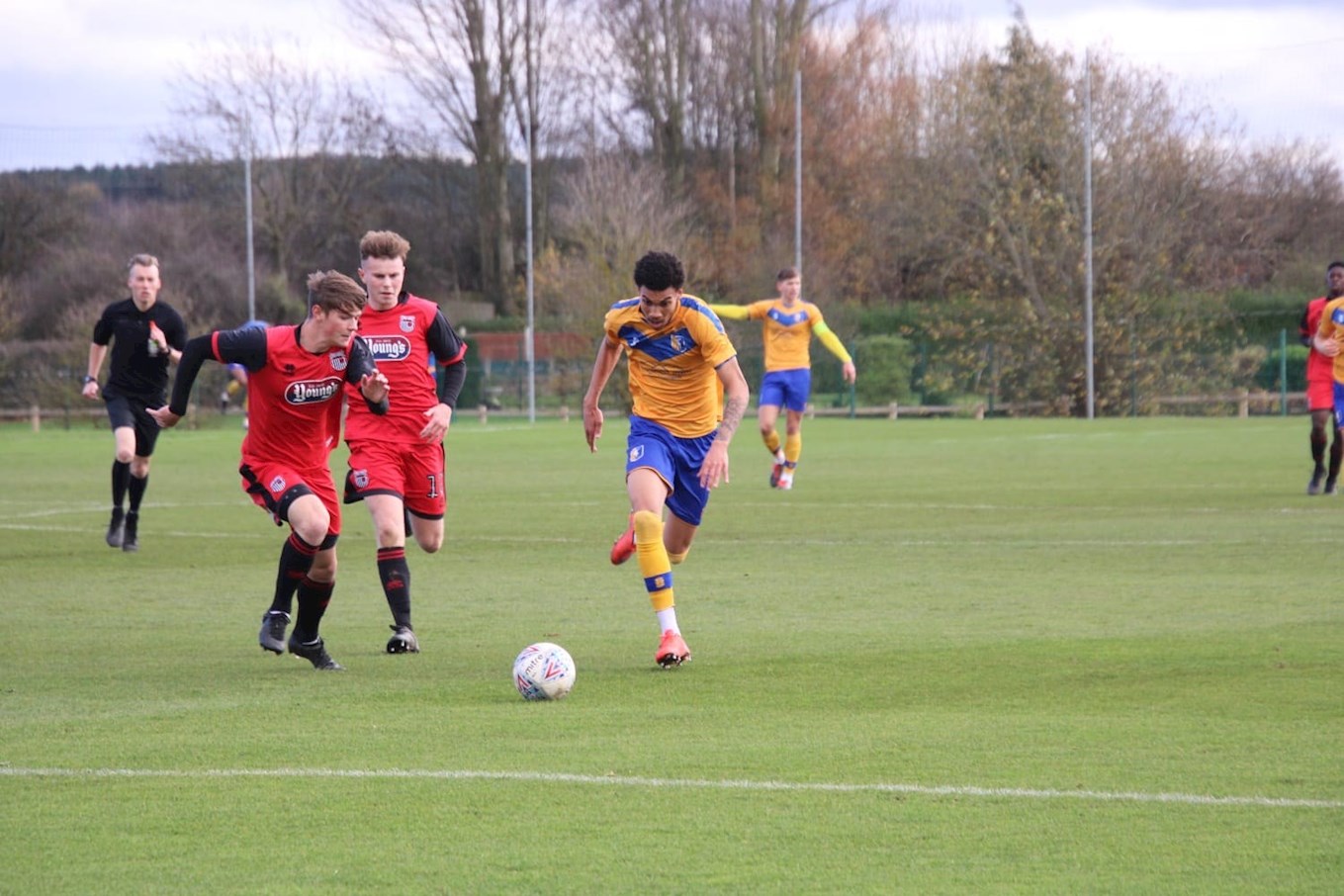 As the game entered the final ten minutes, Anderson and Tomlin were again called upon to keep out the visitors with brave blocks and Hurdis was involved once more at the other end, seeing his powerful strike from distance fly past the post after good hold-up play from Diego Edwards.

Substitute Robbie Kokkinos, aged just 14, sparkled in the closing stages as he made his mark on the game with some neat touches, but the Stags were unable to break down the Grimsby defence and the referee blew for full-time.