The Stags are back in Sky Bet League Two action again this Saturday (19 November) away at Harrogate (3pm kick-off). Here’s all you need to know…

Oli Hawkins and Ollie Clarke will be assessed ahead of the visit to The EnviroVent Stadium after picking up knocks last weekend at Rochdale.

Riley Harbottle continues to be treated for a thigh injury which he sustained against Bradford City arlier this month.

Stephen McLaughlin is still working to recover from an ankle injury and is unlikely to feature against the Sulphurites.

Saturday’s visit to Harrogate will come too early for Rhys Oates who continues to work hard to return from a pectoral injury.

Will Swan will be assessed ahead of Saturday's fixture after picking up a hand injury.

The referee for this Saturday's match will be Scott Oldham. Mr. Oldham will be assisted by Daniel Woodward, Simon Clayton and fourth official, Ross Joyce.

Tickets for Saturday’s contest against Harrogate Town are now sold out. Thank you for your incredible support!

Sandy’s Bar & Kitchen will be open from 9am and will serve bacon and sausage cobs.

Coaches will depart at 11:15am from One Call Stadium.

Coach prices are as follows:

iFollow Stags subscribers can watch Saturday’s match for just £10. Our League Two encounter against Harrogate can be viewed in the UK and abroad via: mansfieldtown.net/ifollow.

Stags have acquired only a point from a possible 18 in their six matches against the Sulphurites – a trend which Mansfield never rarely looked like bucking.

The damage was done at the break as Harrogate entered the interval with a three-goal cushion.

And despite three fresh faces introduced by the Stags at half-time, Mansfield were unable to recover from Harrogate’s first-half goalscoring spree.

The amber and blue made three changes from the side which won 1-0 away at Rochdale last Saturday.

Stags had the game’s first opportunity inside the first minute when Stephen Quinn made an interception midway inside the home half. And after a wall-pass with George Maris, the ex-Sheffield United man dragged his shot wide from 25 yards.

Two minutes later, Maris was on the receiving end of a strong challenge from Harrogate captain Josh Falkingham, who received the first yellow card of the afternoon.

The home side started their goalscoring exploits with their first charge forwards in the fifth minute.

With Stags all at sea, Harrogate hit Mansfield on the counter surge as Danny Grant advanced from the halfway line to slide forward to Alex Pattison who coolly slotted beyond Christy Pym from the left of the box.

Neither side then had a chance of note until the 18th minute when Oli Hawkins nodded wide from Quinn’s left-sided delivery.

Stags were undone by a move through the middle as Harrogate doubled their advantage a minute later. With the defence playing a high line, Luke Armstrong latched onto a throughball and did the rest with a composed finish after a one-on-one with Pym.

At the other end, Harrogate goalkeeper Pete Jameson had to be alert to tip behind a dipping cross from Hiram Boateng and then moments later was at full stretch to impressively deny Anthony Hartigan’s edge-of-the-box drive.

John-Joe O’Toole then entered the referee’s book for a mis-timed challenge on Grant near the touchline.

From the subsequent free-kick, Pym was well behind Joe Mattock’s snapshot as the hosts sought a third.

As Stags looked to pull one back, Boateng tried his luck with a curling attempt which deflected behind for a corner.

Kieran Wallace was shown a yellow card for a foul in the 29th minute.

Stags had a golden chance to reduce the deficit with 12 minutes of the first-half remaining.

Hartigan swept in a superb free-kick from the right, but Hawkins was unable to find the net as his headed effort was nodded into the ground before bouncing over the bar.

Stags were now probing and Akins stung the palms Jameson with a powerful shot.

But the visitors were dealt another blow as Harrogate took advantage of slack defensive play to net a third in stoppage time.

The hosts were allowed to get in behind the defence again as Jaheim Headley slipped to Armstrong who was allowed space and time to find the net from close range.

Stags’ boss Nigel Clough shuffled the pack at the break with a hattrick of changes.

Lewis Page, who signed a one-month deal for Mansfield in the week, came on to face his former employers and Elliott Hewitt and Will Swan were also introduced to the action.

And Page was quickly in the wars, caught by a late challenge from Kayne Ramsay, who received a yellow card just four minutes after the restart.

Stags were desperate for an early goal to start the half and Quinn should have done better when he smashed over the target after Harrogate failed to deal with a long throw by Elliott Hewitt.

Akins went close to connecting with a left-sided cross in the 56th minute but headed wide, under pressure from a Harrogate marker.

Swan, racing forwards, was then dragged to the deck by Mattock, who received a booking.

As the game ticked past the hour, Stags caused their own problems by being careless in possession. And Pym had to scurry out of his goal to take the ball away from Muldoon before Pattison headed wide for a goal-kick following a cross.

In the 63rd minute, Pym was needed again, this time to beat away Headley’s piledriver.

Three minutes later, George Lapslie took to the field at the expense of Anthony Hartigan.

On 71 minutes, Stags almost caught Harrogate off guard with a well-worked corner.

Quinn delivered low and short to Maris, who planted a clever ball into the goal area. And after good skill by Akins to backheel towards goal, Harrogate were able to block and clear from the goalline.

Within the blink of an eye, Pattison let fly at the other end, but Pym was well positioned to make the stop.

On 73 minutes, striker Rhys Oates took to the field for the first time since August, replacing Stephen Quinn.

Swan leapt superbly to head against the bar on 85 following a sweeping cross from Hewitt on the right-hand touchline, but by then the game was out of Stags’ reach. 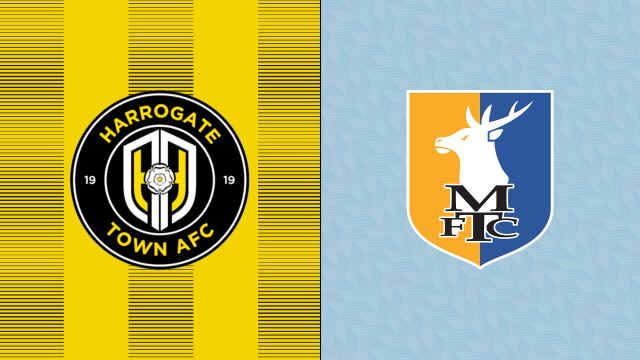 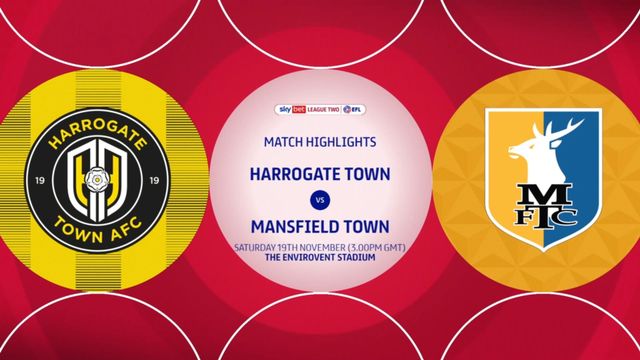 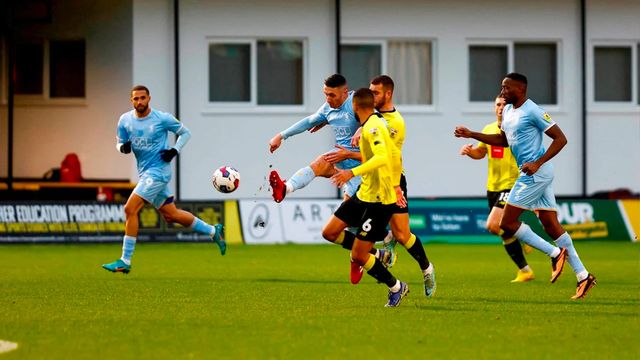